Yves here. This post on permafrost may initially strike many readers as being unduly basic, but don’t be deceived. Once it gets going, it provides a lot of useful and hopefully new detail.

By Mark J. Lara, Assistant Professor in Plant Biology & Geography, University of Illinois at Urbana-Champaign. Originally published at The Conversation

Across the Arctic, strange things are happening to the landscape.

Massive lakes, several square miles in size, have disappeared in the span of a few days. Hillsides slump. Ice-rich ground collapses, leaving the landscape wavy where it once was flat, and in some locations creating vast fields of large, sunken polygons.

It’s evidence that permafrost, the long-frozen soil below the surface, is thawing. That’s bad news for the communities built above it – and for the global climate.

As an ecologist, I study these dynamic landscape interactions and have been documenting the various ways permafrost-driven landscape change has accelerated over time. The hidden changes underway there hold warning for the future. 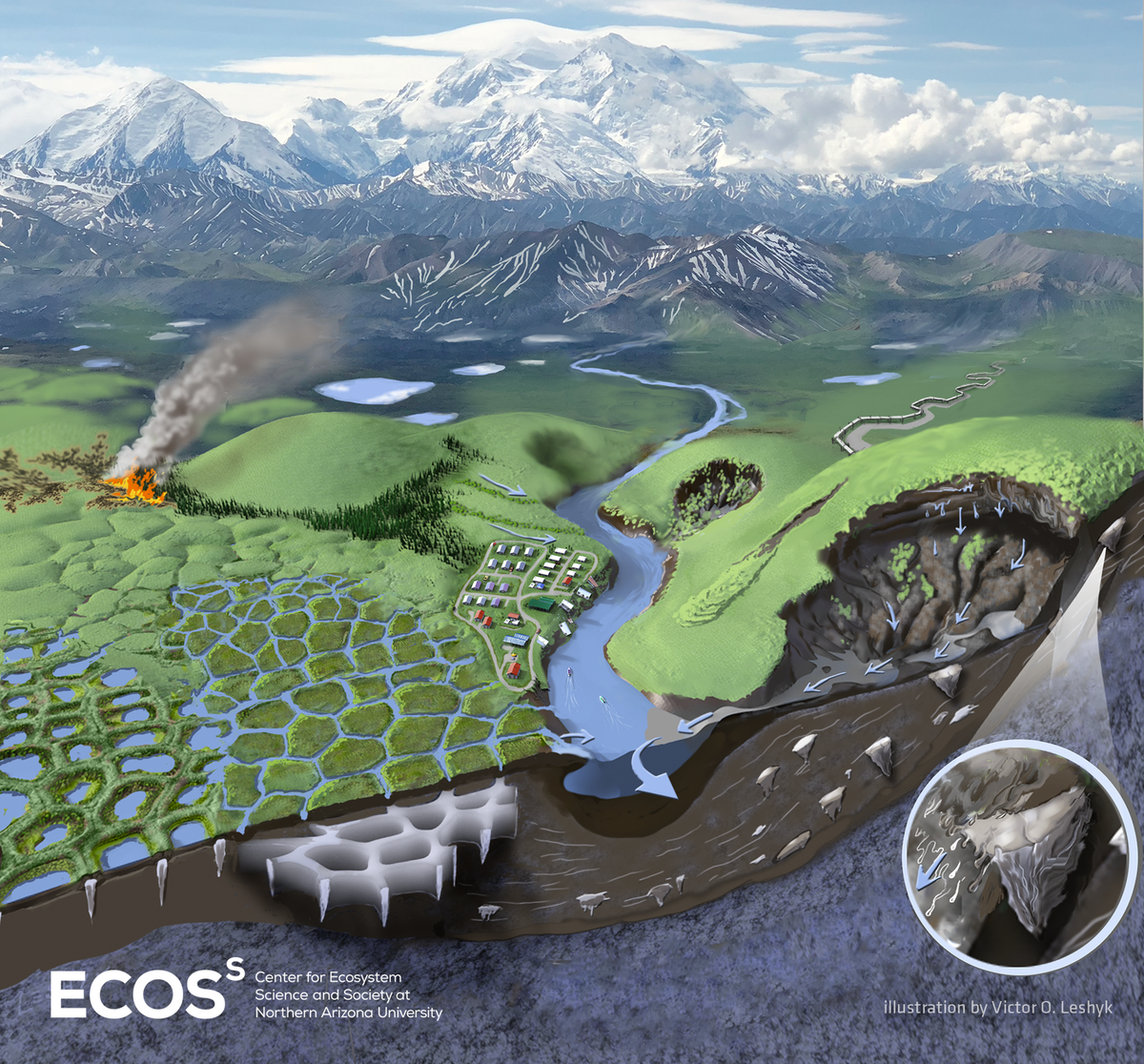 Permafrost is perennially frozen soil that covers about a quarter of the land in the Northern Hemisphere, particularly in Canada, Russia and Alaska. Much of it is rich with the organic matter of long-dead plants and animals frozen in time.

These frozen soils maintain the structural integrity of many northern landscapes, providing stability to vegetated and unvegetated surfaces, similar to load-bearing support beams in buildings.

As temperatures rise and patterns of precipitation change, permafrost and other forms of ground ice become vulnerable to thaw and collapse. As these frozen soils warm, the ground destabilizes, unraveling the interwoven fabric that has delicately shaped these dynamic ecosystems over millennia. Wildfires, which have been increasing across the Arctic, have been increasing the risk. 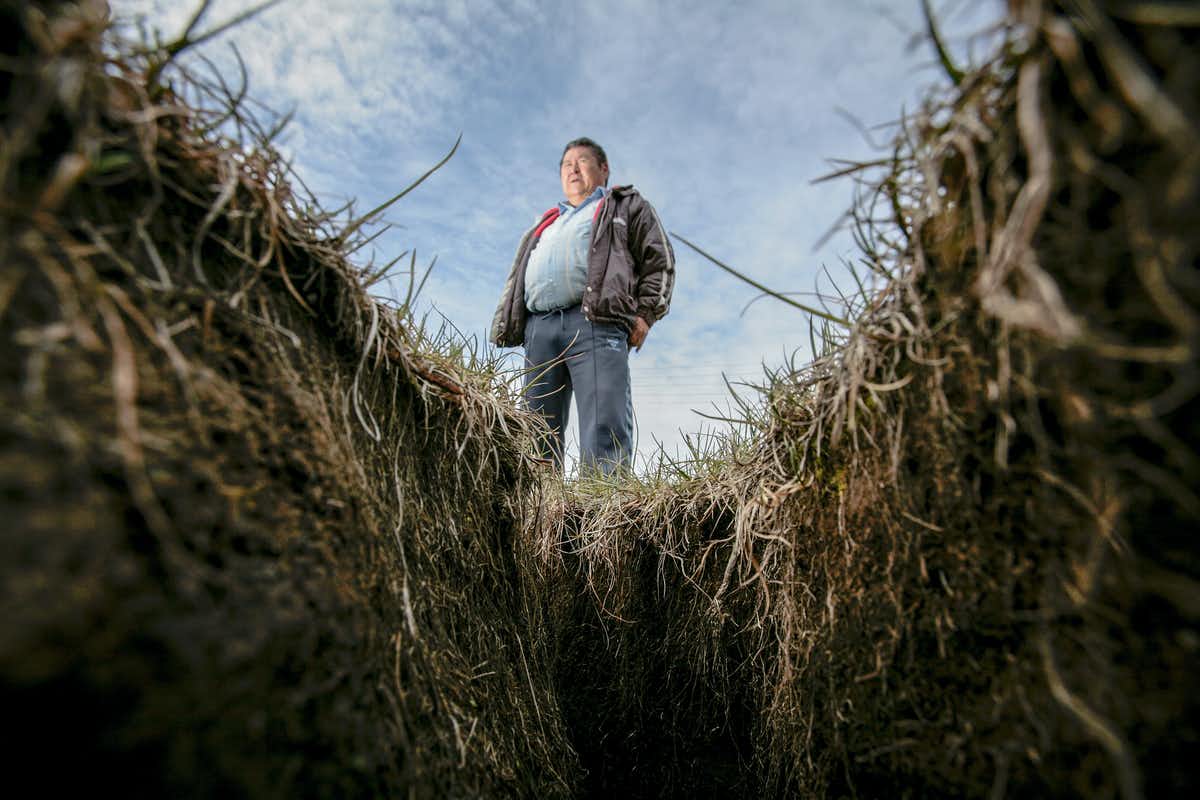 Under the surface, something else is active – and it is amplifying global warming. When the ground thaws, microbes begin feasting on organic matter in soils that have been frozen for millennia.

Evidence of human-caused climate change is mounting across the permafrost extent.

The disappearance of large lakes, multiple square miles in size, is one of the most striking examples of recent patterns of northern landscape transitions.

The lakes are draining laterally as wider and deeper drainage channels develop, or vertically through taliks, where unfrozen soil under the lake gradually deepens until the permafrost is penetrated and the water drains away.

There is now overwhelming evidence indicating that surface water across permafrost regions is declining. Satellite observations and analysis indicate lake drainage may be linked with permafrost degradation. Colleagues and I have found it increases with warmer and longer summer seasons. 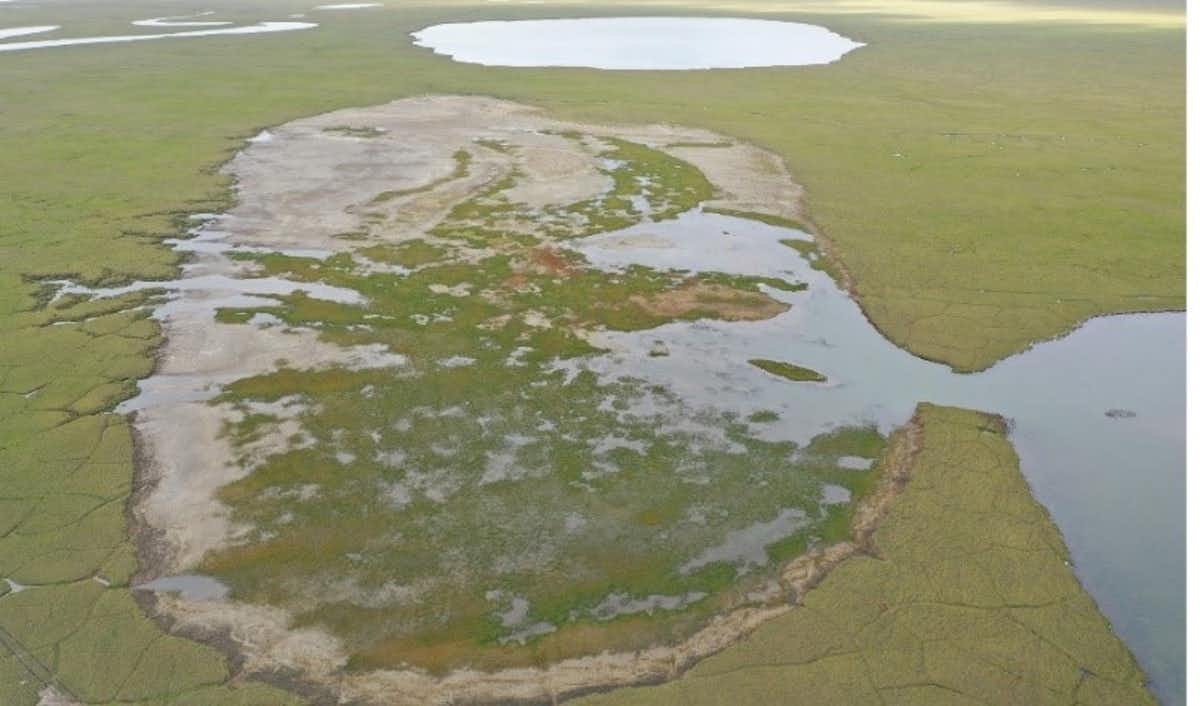 This insight came after some of the highest rates of catastrophic lake drainage – drainage that occurs over a few days due to permafrost degradation – on record were observed over the past five years in northwestern Alaska.

The disappearance of lakes across the permafrost extent is likely to affect the livelihoods of Indigenous communities as water quality and water availability important for waterfowl, fish and other wildlife shift.

The thaw and collapse of buried glacial ice is also causing hillsides to slump at increasing rates across the Russian and North American Arctic, sending soil, plants and debris sliding downslope.

One new study in northern Siberia found that the disturbed land surfaces increased over 300% over the past two decades. Similar studies in northern and northwestern Canada found slumping there also accelerated with warmer and wetter summers. 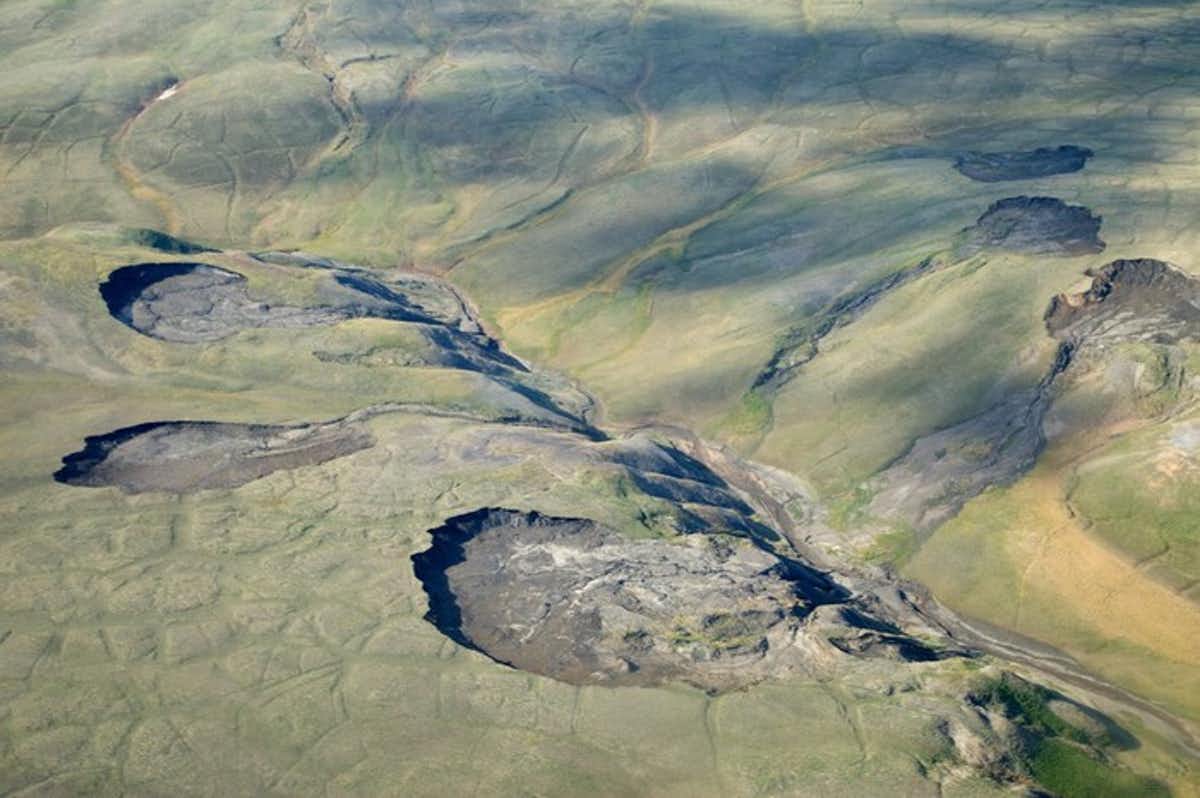 In flat terrain, ice wedges are able to develop, creating unusual geometric patterns and changes across the land.

Over decades to centuries, melting snow seeps into cracks in the soil, building up wedges of ice. These wedges cause troughs in the ground above them, creating the edges of polygons. Polygonal features naturally form as a result of the freezing and thawing process in a way similar to that seen at the bottom of drying mud flats. As ice wedges melt, the ground above collapses.

Even in extremely cold high Arctic environments, the impacts of only a few uncommonly warm summers can dramatically change the surface of the landscape, transitioning previously flat terrain into undulating as the surface begins to sink into depressions with the melting of ice in the soil below. Overall rates of ice wedge thawing have increased in response to climate warming. 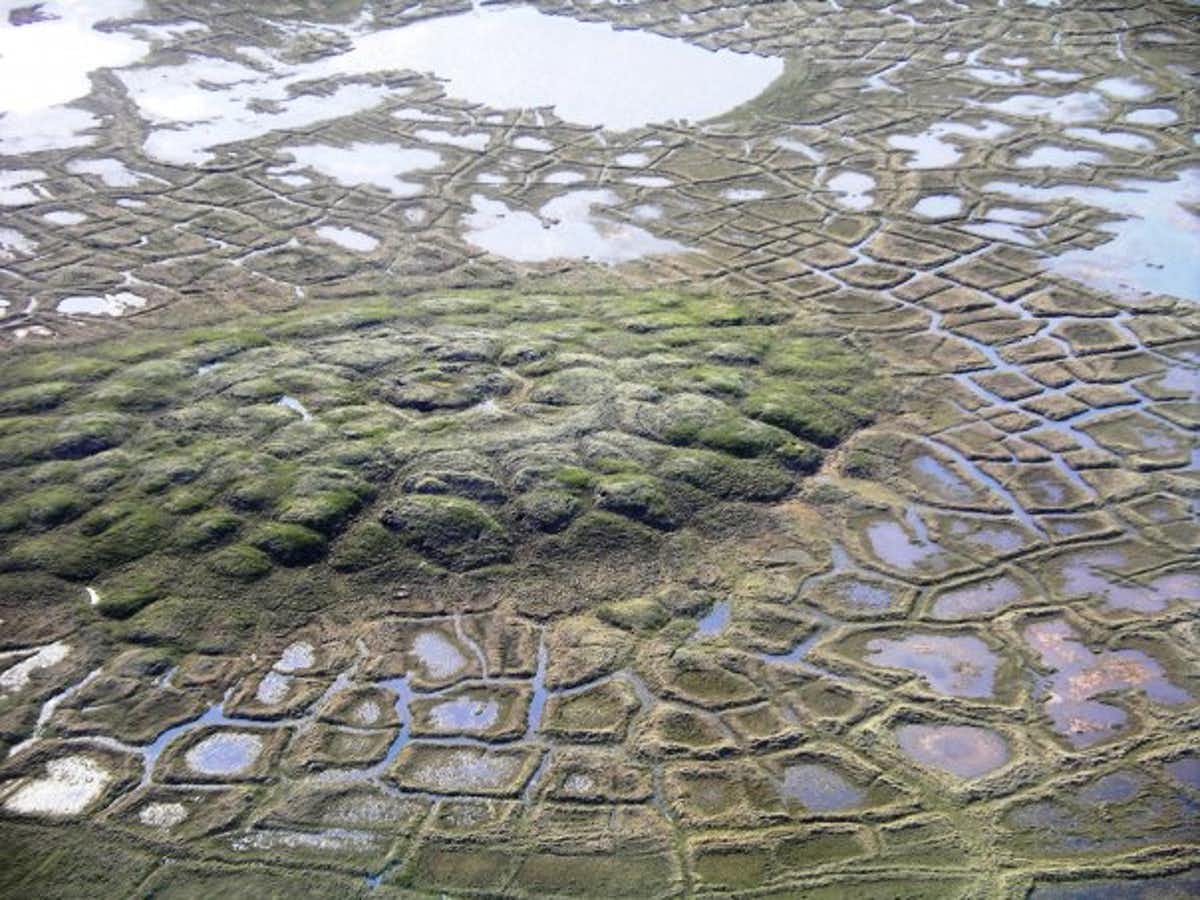 Across many Arctic regions, this thawing has also been hastened by wildfire. In a recent study, colleagues and I found that wildfires in Arctic permafrost regions increased the rate of thaw and vertical collapse of the frozen terrain for up to eight decades after fire. Because both climate warming and wildfire disturbanceare projected to increase in the future, they may increase the rate of change in northern landscapes.

The impact of recent climate and environmental change have also been felt at lower latitudes in the lowland boreal forest. There, ice-rich permafrost plateaus – elevated permafrost islands heaved above adjacent wetlands – have rapidly degraded across Alaska, Canada and Scandinavia. They can look like cargo ships filled with sedges, shrubs, and trees sinking into wetlands.

Why Does It Matter?

Frigid temperatures and short growing seasons have long limited the decomposition of dead plants and organic matter in northern ecosystems. Because of this, nearly 50% of global soil organic carbon is stored in these frozen soils.

The abrupt transitions we’re seeing today – lakes becoming drained basins, shrub tundra turning into ponds, lowland boreal forests becoming wetlands – will not only hasten the decomposition of buried permafrost carbon, but also the decomposition of above-ground vegetation as it collapses into water-saturated environments. 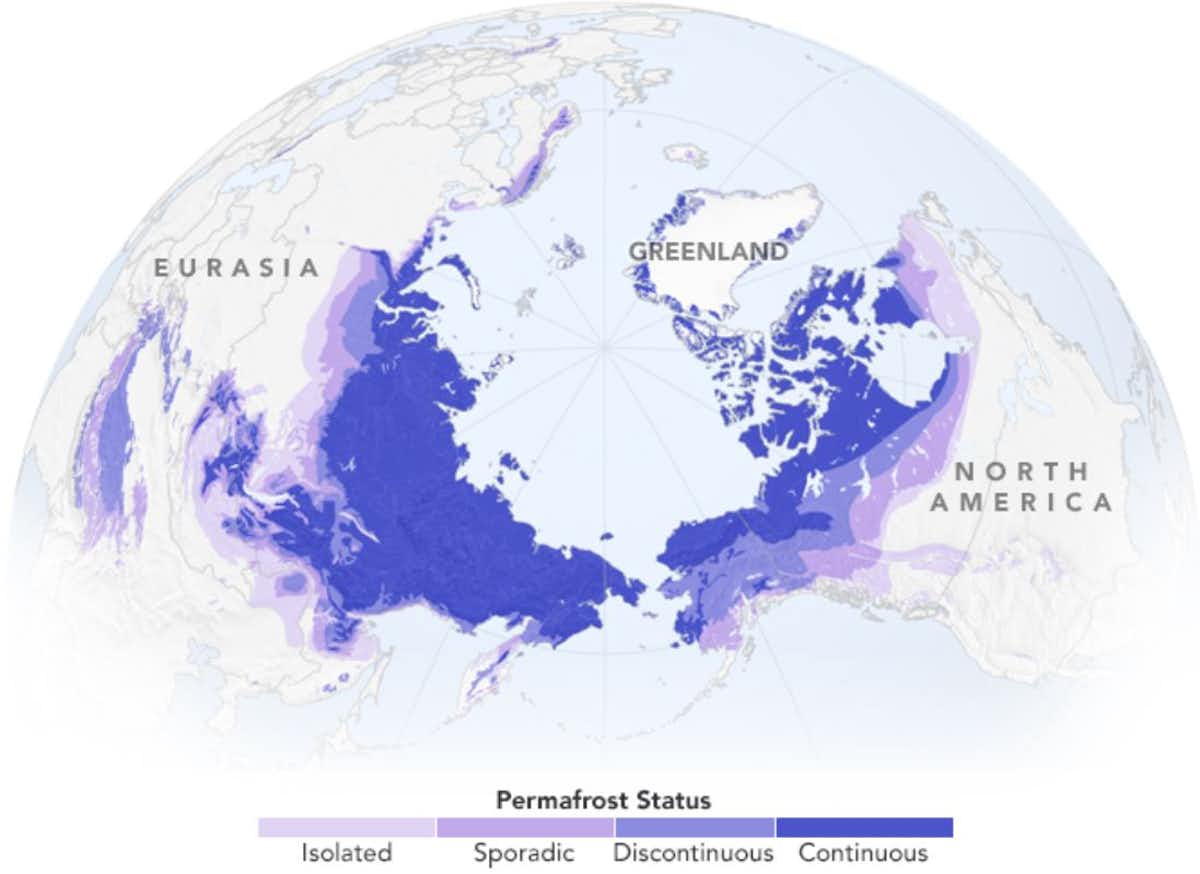 Climate models suggest the impacts of such transitions could be dire. For example, a recent modeling study published in Nature Communications suggested permafrost degradation and associated landscape collapse could result in a 12-fold increase in carbon losses in a scenario of strong warming by the end of the century.

This is particularly important because permafrost is estimated to hold twice as much carbon as the atmosphere today. Permafrost depths vary widely, exceeding 3,000 feet in parts of Siberia and 2,000 feet in northern Alaska, and rapidly decrease moving south. Fairbanks, Alaska, averages around 300 feet (90 meters). Studies have suggested that much of the shallow permafrost, 10 feet (3 meters) deep or less, would likely thaw if the world remains on its current warming trajectory.

To add insult to injury, in water-logged environments lacking oxygen, microbes produce methane, a potent greenhouse gas 30 times more effective at warming the planet than carbon dioxide, though it doesn’t stay in the atmosphere as long. 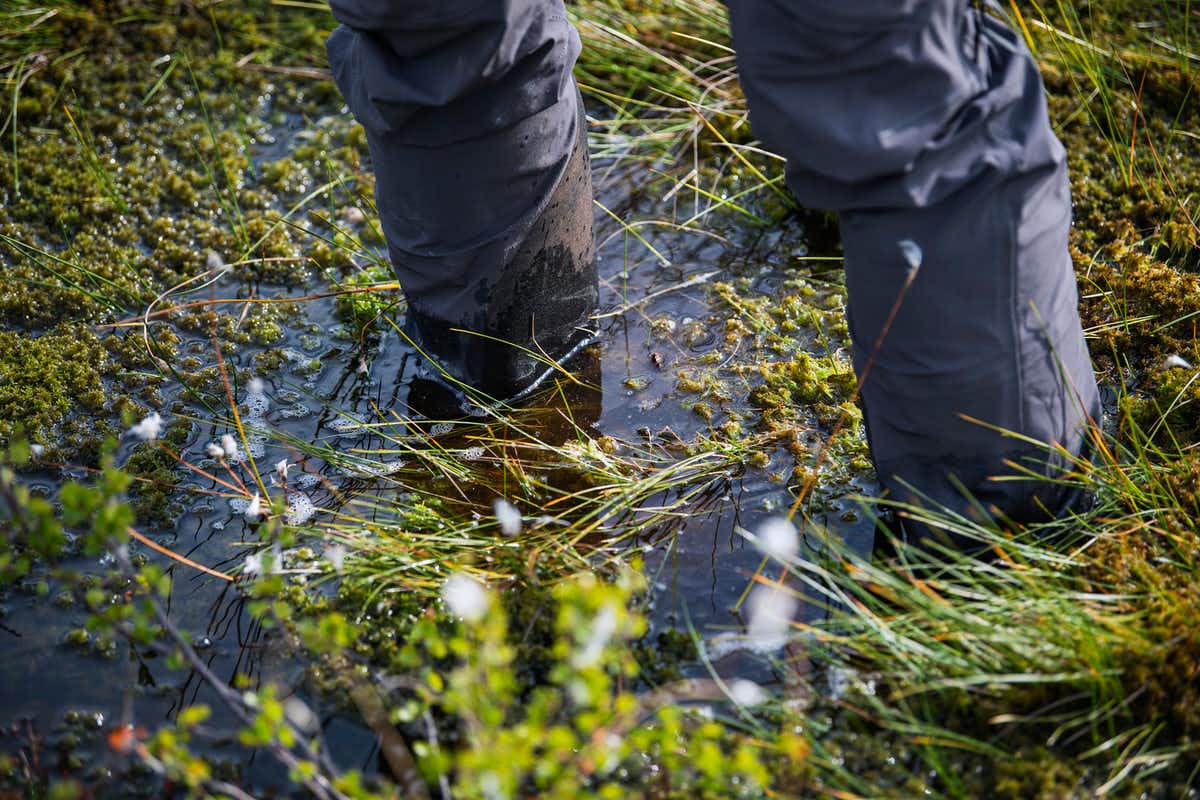 How big of a problem thawing permafrost is likely to become for the climate is an open question. We know it is releasing greenhouse gases now. But the causes and consequences of permafrost thaw and associated landscape transitions are active research frontiers.

One thing is certain: The thawing of previously frozen landscapes will continue to change the face of high-latitude ecosystems for years to come. For people living in these areas, slumping land and destabilizing soil will mean living with the risks and costs, including buckling roads and sinking buildings.