Yves here. It’s not hard to shed crocodile tears for retailers suffering from an inflation induced profit squeeze. Retail is a cyclical business; that’s why historically many owned their own stores. That would lower their fixed costs and help them ride out bad times.

And even though retailers have thin margins compared to many other industries, it is also true that corporate profit share as a percent of GDP has been at extremely high levels compared to long-standing norms in recent years. So seeing companies have to refrain from passing on all price increases and seeing profit levels take a hit is an overdue development. It’s just too bad to see it not (yet) happening more broadly.

And if you think things are bad on the inflation front, there’s plenty of room for it to get worse. During the 1970s inflation, analysts and investors found it increasingly difficult to interpret and trust corporate financial statements. First, different line items were inflating at different rates, and second, any asset heavy business was not getting an adequate depreciation tax shield, so their financial statements were almost certainly overstating their true condition. Not being sure the financials are presenting an accurate picture creates even more leeriness about owning stocks.

When analysts start caring about the choice of LIFO versus FIFO for inventory accounting, you’ll know the that the underlying economics are in doubt.

Target reported today that its revenues, at $25.2 billion in Q1, beat by 4% the mega-stimulus-miracle Q1 last year when consumers, awash in government stimulus cash, had gone hog-wild. This was similar to Walmart, which had reported yesterday that its total revenues too beat that stimulus-miracle quarter last year by 2.4%. That’s pretty good when you think about that buy-everything craziness that reigned a year ago in the most ridiculously overstimulated economy ever.

But both retailers reported that their costs surged – product costs, transportation costs, labor costs, and other costs. Target reported that its product costs jumped by 10.4%, and that selling and administration expenses rose by 5.6%; and that therefore operating income plunged by 43%, and that its operating margin (operating income divided by revenues) was only 5.3%, down from 9.9% a year ago, which was a shocker, and it blew out the fuse.

Turns out, inflation is eating up retailers’ profit margins. “Throughout the quarter, we faced unexpectedly high costs, driven by a number of factors, resulting in profitability that came in well below our expectations, and well below where we expect to operate over time,” the earnings release said. Shares kathoomphed 25% during the day and afterhours to $161.61, and were down 38.8% from the peak last August: 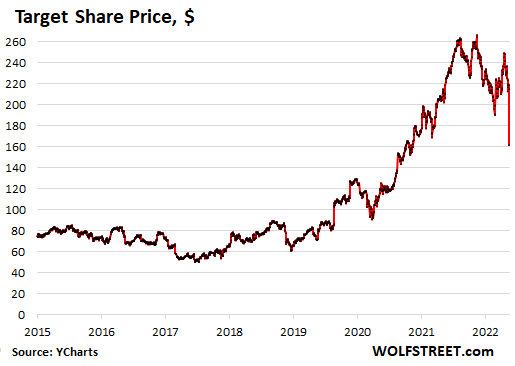 Target slashed its projection of its operating margin for the full year, squeezed further by inflation and cost increases and the supply chain chaos. It recognized that it wouldn’t be able to pass on all the cost increases it’s facing, though it would be trying.

But wait… That plunge only took the share price back where it had been in May 2020 as the stimulus checks were hailing down on consumers. It just shows to what ridiculous highs these shares have been whipped and that even for viable big companies, the regression back to normal, wherever that may be, is going to be rough.

Walmart reported yesterday that its gross profit decline due to “elevated supply chain costs and product mix,” with some customers shifting to lower-end products. And it said that operating expenses increased “primarily due to increased wage costs in Walmart U.S.”

Revenues rose 2.4% over the stimulus-miracle Q1 last year, and that was pretty decent considering the craziness a year ago.

Retail is a low-margin business, and small cost increases can wipe out much of the margin. Walmart’s cost of sales rose 3.5% and operating, selling, and administrative expenses rose 4.5%. And therefore, operating income plunged 23%, and net income plunged by 25%.

Walmart’s shares dove 18% since it reported earnings yesterday and 24% since their peak on April 21.

Target and Walmart are part of the retailer category “general merchandise stores,” where retail sales in April – that would the final month in most retailers’ Q1 – were very high, but were up by less than 1% from the historic stimulus-miracle April a year ago (from my report about retailers by category). Note the three giant spikes during the months when the three stimulus checks went out: 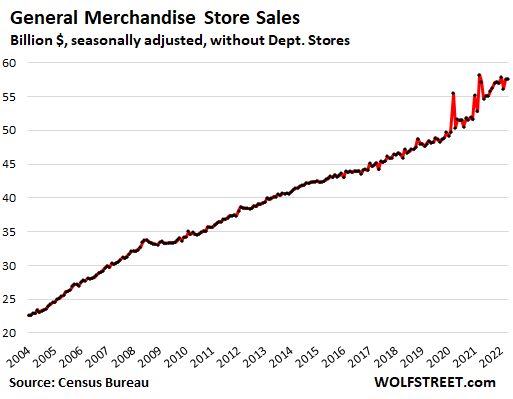 The hot retailer categories. Retail sales were hot in April and the prior months at “eating and drinking places” (+20% year-over-year) and at “miscellaneous stores,” which include cannabis stores where business is booming (+19% year-over-year). 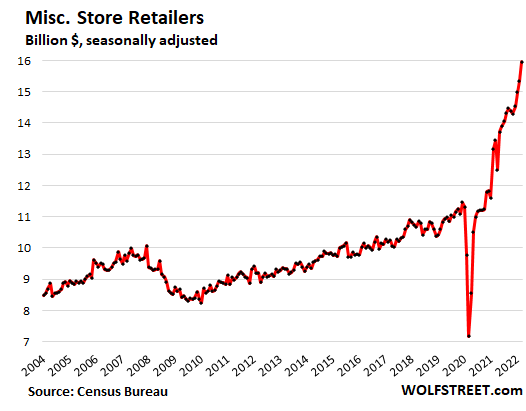 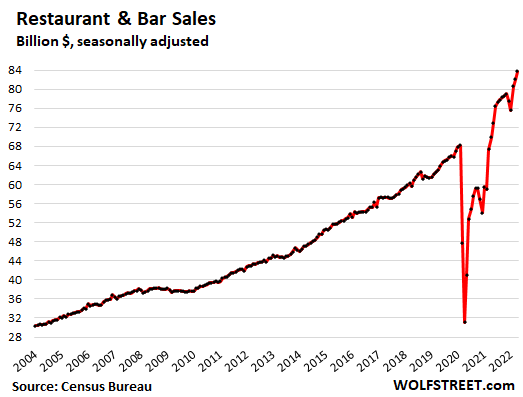 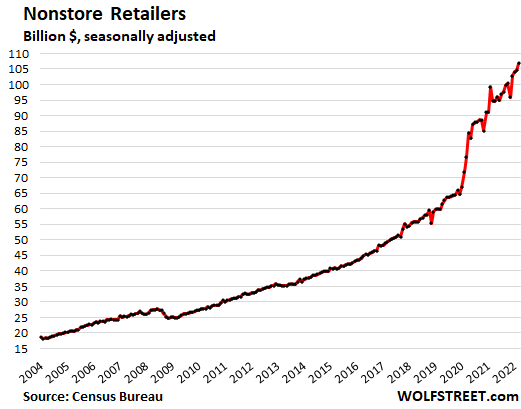 Amazon [AMZN] had waylaid investors with its Q1 report on April 28. Total revenues grew “only” 7%, which would have been great for Target and Walmart, but it was Amazon’s slowest growth rate since the dotcom bust. In addition to a huge loss on its stake in Rivian, it also included all kinds of warnings about soaring expenses in its retail division. The whole thing was a mess. And its stock plunged.

Wayfair [W], the online furniture retailer, had reported a huge loss on May 5, and its revenues actually fell 14% from the stimulus-miracle-Q1, and its shares have gotten shookalacked, including today (-14% during regular trading and afterhours), and are down 87% from their peak in March 2021 and are where they’d been in 2017. Because raging inflation, at some point, is no one’s friend. 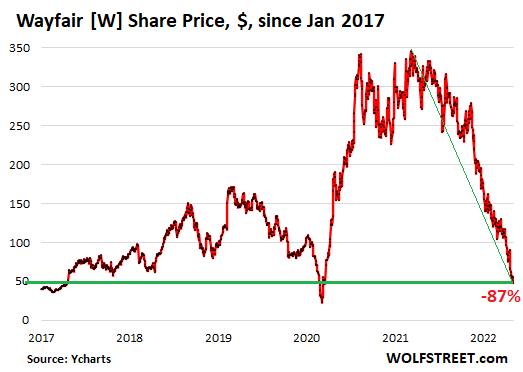