By M.R. O’Connor, who writes about the politics and ethics of science, technology, and conservation. She is the author of “Resurrection Science: Conservation, De-Extinction and the Precarious Future of Wild Things” and “Wayfinding: The Science and Mystery of How Humans Navigate the Earth.” Originally published at Undark

The first peer-reviewed map of the world’s megaforests was the result of an improbable collaboration between the Swedish furniture maker Ikea and the environmental activist organization Greenpeace. They were thrust together following the collapse of the Soviet Union, when Russia’s forests — including a mature and verdant demilitarized zone knows as the Green Belt of Fennoscandia — were opened up to European timber companies. Roads and logging began to eat away at the landscape until environmentalists began to protest. Ikea wanted wood and Greenpeace wanted to protect special parts of the forest, places of extraordinarily complex webs of organisms.

To find out where their interests aligned, they needed a map. In the following years, an international group of scientists assembled one, but went beyond Russia, searching for major forests on all continents, eventually encompassing the globe’s tropical and boreal regions. In 2008, they released a cartographic marvel: a map of 5 million square miles of intact forest making up 2.6 percent of the planet’s land area. It required 150 billion pixels. 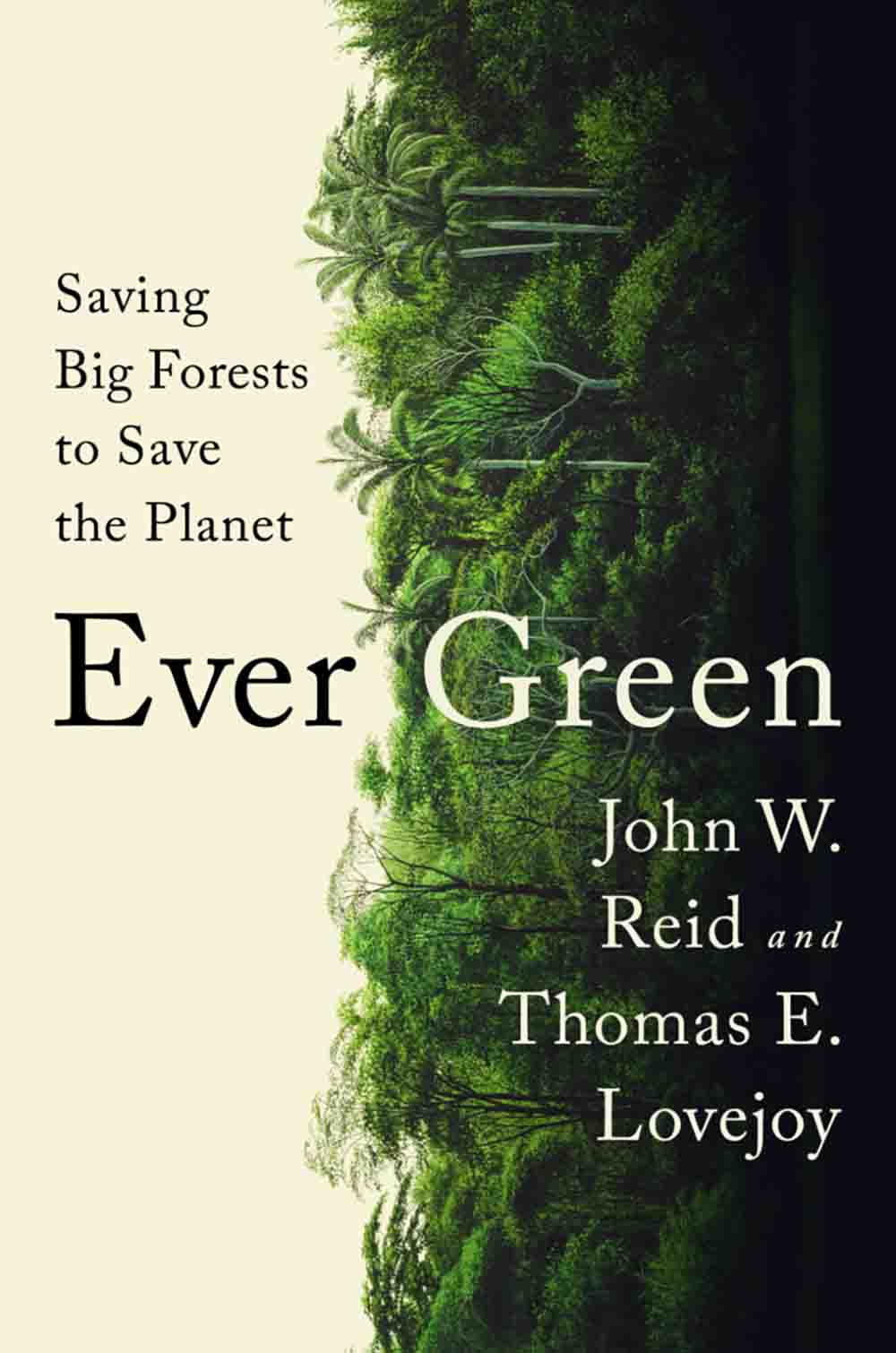 In “Ever Green: Saving Big Forests to Save the Planet,” John W. Reid and Thomas E. Lovejoy, who died last yearat the age of 80, explain that the map — and the concept of intact forests it illustrates — shows us “where the magic is still happening — where there are massive fully functional forest cores, which the planet needs to keep working.”

The authors’ passionate argument is that the current focus on reducing coal and gas consumption or switching to electric vehicles to prevent global warming from exceeding 1.5 degrees centigrade overlooks an essential reality: Humans need to keep carbon in the ground.

As they point out, the boreal forests alone hold 1.8 trillion metric tons of carbon, the equivalent of an astonishing 190 years’worth of worldwide emissions at 2019 levels. Limiting emissions is important, of course, but if we lose our forests, it won’t matter much. “The math of keeping our world livable doesn’t add up without caring for our planet’s biology in general and keeping our big forests in particular,” they write.

Lovejoy and Reid focus on the world’s five remaining megaforests — New Guinea, the Congo, the Amazon, the North American boreal zone, and the Russian taiga — and they make a real effort to persuade readers of their arguments by avoiding a book that reads as a dressed up International Panel on Climate Change report.

They vividly describe their boots-on-the-ground reporting around the world and their many conversations with people who live and work in the forest. The places they visit are described richly: In Russia, amur tigers and leopards roam woods abounding with autumn foliage. In the Amazon, tapirs with droopy trunks and watery eyes step “mincingly” along riverbanks, and blue morpho butterflies the size of postcards careen “reckless and beautiful” through their camp.

In the past, scientists and conservationists have described such forests with a bewildering number of different terms: frontier, primary, pristine, virgin, deep, natural, ancient. Reid, an economist and conservationist, and Lovejoy, who coined the term “biological diversity,” refer to them as megaforests, or simply big forests.

Their choice to move toward a new vocabulary reflects their belief that previous names were misleading. Since its inception over a century ago, the conservation movement has been plagued by a conviction that “real” nature possesses a kind of “prehuman purity,” they write. Reid and Lovejoy refute this idea: “People have been dwelling in the world’s forests for tens of thousands of years, and they are still there.”

They make a crucial distinction that what defines megaforests is not that they are devoid of humans but they have not yet been compromised by modern industrial development. As botanist Alexey Yaroshenko tells the authors, “They are the last remnants of forest that were in equilibrium with an old type of human influence.” The Green Belt of Fennoscandia, for instance, is not just a landscape of elk and whooper swans — it is the home of the Indigenous Sámi, whose traditional knowledge of plants, animals, and geography is encyclopedic.

The chapters describing the human influence on forests are where “Ever Green”sings in its human-centric argument for conservation, one that is both compassionate and convincing. Megaforests, they explain, are places of wondrous biodiversity and a locus of human diversity.

Forests “reveal the full spectacle of human inventiveness” that have spawned thousands of cultures. For example, the world’s forests contain over a quarter of the Earth’s languages. In the Maybrat language of New Guinea, the words for “forest” include toof, which when spoken “feels like clearing water out of a snorkel” and refers to the forest that people touch everyday through hunting and collecting and gardening.Moss, on the other hand, is reserved for “secret, sacred forest places.”

Each forest culture, they write, has “its own unique way of perceiving reality, processing information, and making it into verbal expression. Each, in other words, with its own way of being in the world.” 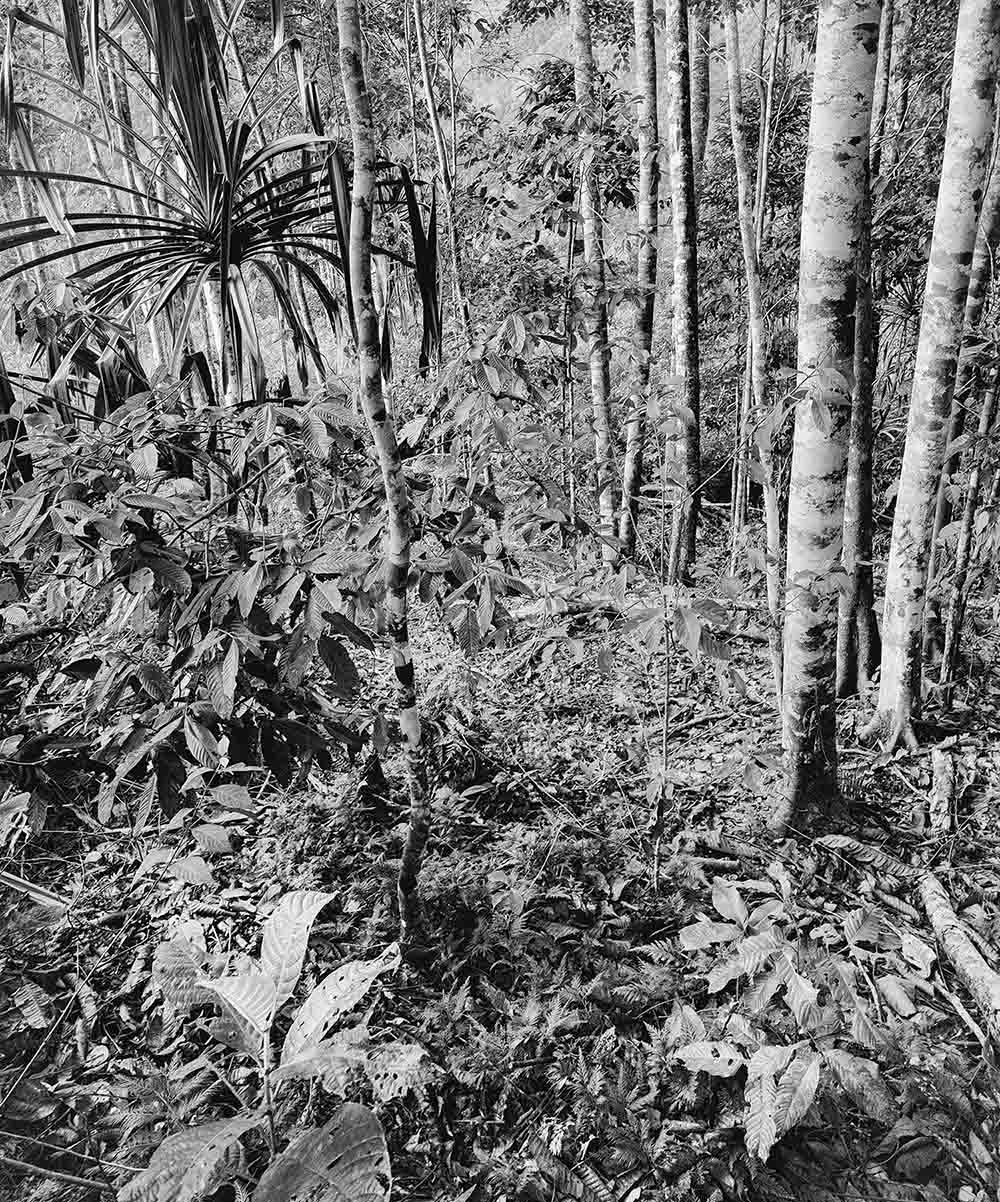 This area of forest in West Papua used to be a farm plot. A native pandanus tree, which are cultivated for their leaves and fruit, can be seen at left. Visual: John W. Reid

Incredibly, anthropologists have found that the greatest predictor of language diversity has little to do with physical, geographical barriers but the amount of annual rainfall. The more consistent the rainfall, the more able a community is to be self-sufficient and therefore isolated. “These ecosystems where languages and cultures multiply are also those where the vegetation thickens and grows tall — forests,” write Reid and Lovejoy.

“Ever Green” goes into depth on the topic of deforestation but avoids a standard narrative of environmental tragedy. (“The most shocking thing” one scientist “has to say about deforestation in the Congo,” they write, “is that he’s never seen any.”) They argue that logging does not necessarily have to spell doom for forests, and that tree-planting campaigns like those put forth by billionaire Marc Benioff are unhelpful distractions from real solutions.

They emphasize that one of the most effective ways to protect forest landscapes is carbon finance — paying heavily forested countries to keep stored carbon in the ground — an idea with enormous potential. They also recommend severely limiting road building, and ensuring that Indigenous people are not sidelined but at the center of forest conservation policy.

For this reason, “Ever Green”is a surprisingly hopeful book. In the final chapter, the authors report that the most common message they heard from forest people to their readers was: “Tell them to come!” They encourage readers to consider their choices as consumers in the context of forest health but mostly to go see a big forest in person or, if that is impossible, to view a small forest where they can encounter the rest of creation. “Step outside anywhere and find a leaf and permit it to blow your mind,” they write.

Unlike so many other smaller ecosystems, our scientific understanding of the significance of the world’s forests and the will to preserve them may have overlapped in time to help slow their destruction. One finishes the book believing that it is possible for these beautiful, mysterious places where humans and trees and animals coexist to be saved, and more determined to support policies that preserve those relationships.