Even though your humble blogger is not shy about having an opinion, even in the best of times, the economy is overly dynamic, and if anything it is more so than usual. That is why, as the cliche has it, “If you must forecast, forecast often.” And Mark Thoma, retired proprietor of the well-regarded blog, Economist’s View, who taught macroeconomic modeling, said they were no good at predicting more than six months out. Ergo, even though we’re going to talk about a pressing issue for households all over the world, inflation, it’s not as if anyone has a very good vantage.

A year ago, the #Fed was confident about #inflation, asserting that it would be back around 2% by the end of 2021.
Today, inflation is 3-4 times that level and likely to remain high into 2023.
Today's Fed, it is confident about a "softish landing."
Let's hope so. A lot at stake.

Nevertheless, the Twitterverse has more than usual wrangling on this topic because Jeff Bezos whinged that Biden should quit touting taxing rich corps more as an inflation treatment:

You know what is more regressive than inflation? Not having a child allowance, paid family and sick leave, pre-K, free community college, etc https://t.co/9m7TbZA851

Needless to say, you can be sure that Bezos is more concerned about the impact of Fed interest rate hikes on his portfolio than he is on the financial wellbeing of ordinary Americans.

Bear in mind that rising interest rates are also hitting homebuyers, although higher interest rates have yet to (much) dent housing prices. I’m shocked at how much Zestimate thinks the house I need to sell has gone up from Feb to now, so not all markets have been affected. However, the Wall Street tonight describes how buyers of newly built homes are getting hammered:

People who agreed to buy homes under construction but haven’t yet closed are facing mortgage-interest rates that could be nearly double what they anticipated when they paid their deposits.

New-home buyers are confronting multiple obstacles this year, from surging mortgage rates to home construction that is taking longer than usual due to supply-chain and labor constraints.

Many home buyers who signed contracts for new homes in 2021 or early this year calculated monthly payments based on near-record-low mortgage rates of around 3% or less. But average mortgage rates have climbed this spring to 5.3%, according to Freddie Mac, as the Federal Reserve started raising short-term interest rates.

Unfortunately, the two categories that are in the public’s face the most, fuel and food prices, are not pretty. As you know all too well, prices at the pump are at new high levels. Diesel is even worse. It’s telling when a supposedly current story is behind the state of play. Kevin W sent us a link to Russia Diesel Exports Drop Sharply In April in OilPrice which included:

“I’ve started to use the term diesel ‘crisis,’ Tom Kloza, head of global energy research at OPIS, told CNBC in late April. “It clearly is a crisis that’s happening before our eyes. I wouldn’t rule out lines, shortages or $6 [price] in places beyond California. I wouldn’t say it’s a shortage yet. Europe, I think they’re headed for a shortage,” he said.

One has to wonder why OilPrice relied on a dated quote. Resilc, in Vermont, wrote the day before: “Diesel $6.50???????? I almost stroked out today.”

And food…we have the US chicken cull thanks to avian flu. Cooking oil prices are high. Corn prices reached a nine-year high last month. Wheat harvests are expected to be poor everywhere but Russia, leading the EU to whine that Russia might “weaponize” food. Gee, wasn’t it the US that was supposed to be the breadbasket of the world? And maybe it would have been a good idea to look at Russia’s position in key commodities before attempting to sanction them into the Stone Age? Oh, and Russia has a key position in fertilizer inputs, when fertilizer has been in short supply in recent years and even more so now.

Things are even less pretty in Europe:

And from a new Bloomberg story:

A gathering storm of renewed energy price-spikes, surging food costs and corresponding social and economic dangers is focusing the minds of Brussels officials who worry of multiple shocks cascading through the European Union from Russia’s war in Ukraine….

An initial crystallization of views on the economy will emerge on Monday, as the commission releases forecasts likely to acknowledge a significant slowdown in economic growth, according to a draft of the outlook seen by Bloomberg.

What Bloomberg Economics Says…
“The impact of the war in Ukraine could still be significantly bigger than either markets or the ECB expect and there remains scope for escalation. Severe energy disruption could easily tip the eurozone into recession.” 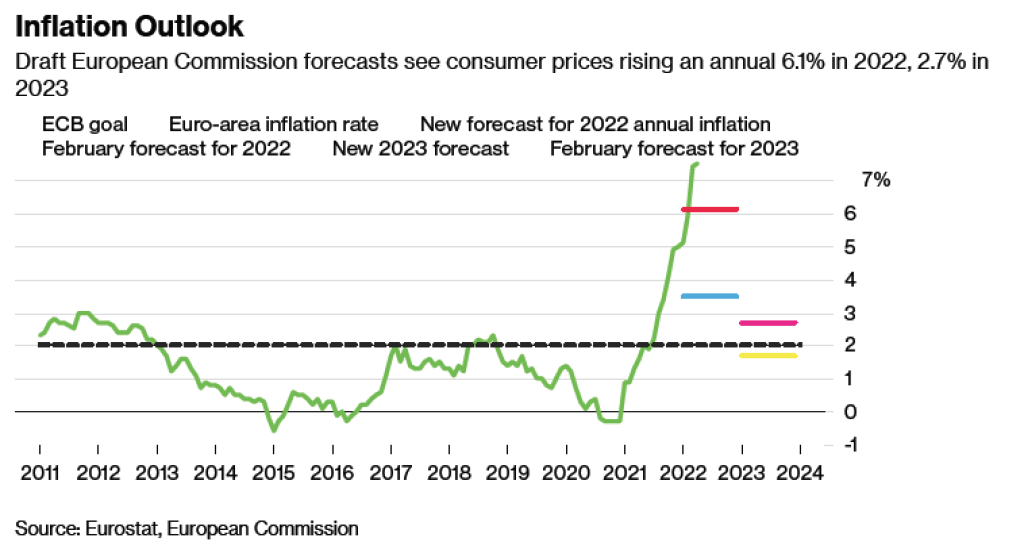 Apologies for talking around the inflation issue, so let’s step back a bit. The origin was Covid-induced supply chain disruptions. Despite people like Jeff Bezos trying to act as if the current inflation is due mainly to government overstimulus, that’s largely incorrect. The issue is that many areas of the economy suffered and still suffer from diminished productive capacity. Hospitals are short-staffed. Restaurants and grocery stores and even NYC bank branches are having trouble hiring. The probate court here in Alabama has a big backlog due to Covid which if anything is getting worse due to the impact of new Covid cases.

Now if you listen to CEOs and macroeconomists, the supply chain disruptions are getting better. But we have the China lockdowns hitting their output, so I’m not so sure. And as indicated above, many businesses in the US are still short handed. I’ve read a lot of theorizing and anecdata, but I don’t recall anyone doing a study on why workers are not taking up job opportunities when we aren’t yet back to pre-Covid levels of labor force participation (as in there are workers who could work but aren’t). 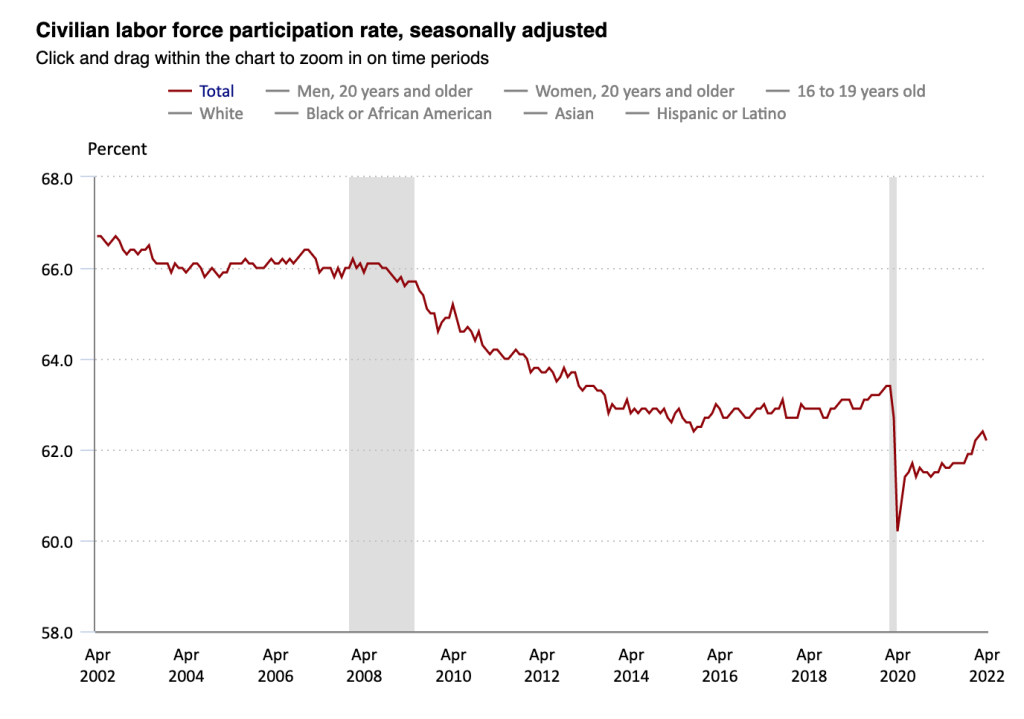 Is it long Covid? Is it households figured out a way to really get their costs down during the lockdowns and decided they’d rather have more free time? Is it early retirements? This is too important a topic for policy not to have a better idea. The reports on this topic all have a blind man and the elephant feel: they may describe one component very accurately, but we still lack a good big picture.

So given the diminished capacity of the economy, which is still continuing in quite a few sectors, it actually may not be entirely wrong to suggest that the Trump/Biden stimuluses were excessive (or perhaps too much too fast), or at least not well enough targeted to increasing productive output. Two factoids support that view. The first is the chip shortage, which resulted from demand for cars crashing, chip makers moving output over to consumer electronics (where demand remained strong) and then not being able to supply automakers very well when the stimulus led auto orders to rebound. The second was the runup in fuel prices, which resulted from economic activity rebounding faster than oil producers could (or wanted to) rev up output (they didn’t want to be caught again with an oil price demand if they ginned up production and the global economy went into reverse due to another bad Covid wave). Mind you, I’m not saying that level of spending was necessarily wrong, but it was targeted almost entirely at supporting demand, when output was a problem too.

Here the contrast with Russia is striking. They had a big inflation shock due to the loss of imports, particularly from Europe, and Russia’s economic team is very much focused on import substitution, with creating/increasing domestic capacity the preferred solution. Admittedly this may be a positive holdover from the old central planning days, but their meeting notes show they are trying to figure out how to alleviate bottlenecks in particular sectors, something our top brass never seems willing or able to do (the politically toxic baby formula shortage is a case study).

So a big and continuing contributor to inflation is extended supply chains plus widespread just in time inventory practices. They create lot of points of failure, and failure means production shortfalls pronto, which translate into scarcity and/or rationing by higher prices.

And the general high prices are not going away soon because OPEC+ is not about to cut anyone else a break. They have a schedule for increasing output, and they are not going to move faster just because everyone else wants them to. High energy prices propagate through the economy.

And the collective West is not helping matters by shooting itself in the foot so it can’t buy shoes from Russia. Hungary and some other less noisy allies have managed to stop the EU from launching a wildly impractical embargo of Russian oil, which would have resulted in a lot of laundering getting pretty much the same oil to Europe at much higher prices. But some countries may still try self-sanctioning, to the detriment of their industry and voters’ standard of living.

And the West is exposed to lower supplies of and higher prices for other Russian commodities, due to being barred from dealing with sanctioned Russian entities and/or Russia implementing more counter-sanctions in retaliation for property heists.

So this inflation is due largely, if not entirely, to the supply side. But all the Fed knows how to do is kill demand via interest rate hikes:

There are good reasons to think inflation, after diminishing, will stay around 4% or even drift higher.

That'd be unacceptable to the Fed and opens the door to higher rates than markets now expect, more market carnage and a weaker economy https://t.co/HlvYPGF84h

However, it’s possible that consumers are so shell shocked that they will clamp down on spending. They might not eat less or more cheaply but they can cut back on other spending categories: travel, entertainment, clothes. Goldman’s Lloyd Blankfein is talking his own book tonight in saying the US is at “very very high” risk of recession, since an economic downturn would get the Fed to back off interest rate increases. But that does not necessarily mean he is wrong. Readers?