Yves here. Michael Hudson has graciously allowed us to publish the forward to his new book The Destiny of Civilizations. Professor Wen Teijun, Executive Dean, Institute of Rural Reconstruction of China, explains how Hudson looks at America’s finance-led hegemony contains the seeds of its own destruction, and is separately suffering from conflict with China’s very different political-economic system, which draws on an industrial capitalism model and seeks to check rentier activities.

For those interested in buying Hudson’s book, you can get a better price and avoid enriching Amazon by procuring it through exlibris. 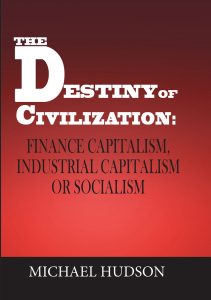 The most important factor affecting the global economy is the increasing strain caused by U.S. hegemony. Its diplomacy has shaped the economic and trading rules enforced by the IMF, World Bank and other international institutions in America’s favor after World War II. U.S. leadership reached its peak with its Cold War victory over the Soviet Union in 1991, consolidated by increasingly aggressive military diplomacy over the next twenty years. But since 2008 this U.S. diplomacy has become so aggressive that it is now self-destructive, driving other nations out of the U.S. orbit, leading America’s international influence to fall increasingly short of its ambition to siphon off the world’s income and wealth for itself despite its own weakening economic power.

The principal conflict in today’s world is between the United States and China. This book by Professor Hudson explains this conflict as a process of international transformation, above all in the sphere of economic systems and policy. He explains why the U.S.-China conflict cannot simply be regarded as market competition between two industrial rivals. It is a broader conflict between different political-economic systems – not only between capitalism and socialism as such, but between the logic of an industrial economy and that of a financialized rentiereconomy increasingly dependent on foreign subsidy and exploitation as its own domestic economy shrivels.

Professor Hudson endeavours to revive classical political economy in order to reverse the neoclassical counter-revolution. The essence of 19th-century political economy was its conceptual framework of value, price and rent theory. Its idea of a free market was one free from economic rent – defined as the excess of market price over intrinsic cost-value, and hence unearned income. The classical aim was to free markets from landlords, monopolies and creditors. Yet the reverse has occurred in the West, particularly since the globalization of neoliberal policies in the 1980s.

Historically, the way for industrial nations to gain wealth and power was to make their government strong enough to prevent a landlord class from dominating, and indeed to suppress the rentiersector as a whole. To promote industrial prosperity, governments provided public services to reduce the costs of living and doing business. Basic services were provided at subsidized prices that would have been replaced by exploitative monopoly prices if key public infrastructure were turned over to private owners.

Economically, the most important service that all economies need to function smoothly is the provision of money and bank credit. When privatized, it becomes a rent-extracting choke point. That is why 19th-century economists developing the logic of industrial capitalism concluded that money and banking needed to be a public utility, so as to minimize financial overhead unnecessary for industrial production.

Today’s anti-classical economics regards financial charges as income earned productively by providing a “service,” which is categorized as output and hence part of Gross Domestic Product (GDP). That statistical methodology treats financial profits, along with other forms of economic rent, as additions to GDP, not as an overhead burden. This produces an illusion that the real economy is growing. But what actually is growing is the rentiersector, which does not create real economic value, but merely transfers income from debtors, renters and consumers to creditors, landlords and monopolists. This rentiertakeover is achieved by privatizing the public sector to create rent-extracting means for monopoly capital, organized mainly by the financial sector.

This book by Professor Hudson is based on the lecture series on finance capitalism that he presented for the Global University for Sustainability. The series is directed towards the Chinese audience because he believes that China’s mixed economy with its classical industrial policy has best succeeded in avoiding the neoliberal American disease. These lectures explain why the U.S. and other Western economies have lost their former momentum: A narrow rentierclass has gained control and become the new central planner, using its power to drain income from increasingly indebted and high-cost labor and industry. The American disease of de-industrialization has resulted from the costs of industrial production being inflated by the economic rents extracted by this class under the system of financialized monopoly capitalism that now prevails throughout the West.

The policy question for China is how it can best maintain its advantage and indeed, avoid falling prey to American ideological and diplomatic pressure. Professor Hudson summarizes his prescription as follows: First, national statistics should distinguish the productive sectors that create real value from the financialrentiersectors that merely transfer income from the rest of the economy to themselves. A transfer payment is not production. Second, all successful economies have been mixed economies. Money and credit, land, public services and natural resources should be controlled by the government so that they can be provided at cost or on a subsidized basis, thereby lowering the cost of living and doing business in the private sector. Third, the way to prevent unproductive debt overhead is to tax away economic rent so that it will not be financialized and paid out to banks as interest by speculators and buyers of rent-extracting opportunities.

A central point of Professor Hudson’s analysis is that U.S. diplomacy is an extension of the neoliberal ideology sponsored by its rentieroligarchy. “U.S. exceptionalism” means that the United States can ignore international laws, dictate the policies of other countries, and demand that they relinquish control of potential rent-yielding assets (banking, mineral-resource extraction rights, and high-technology monopolies) to U.S. multinational corporations and those of U.S. economic satellites.

For nearly the entire 75 years since World War II, pro-creditor laws have been imposed on all nations within the U.S. diplomatic orbit. This U.S. drive has imposed austerity on Global South countries when they have not been able to pay their dollarized debts, sacrificing their domestic economy and the well-being of their people to pay foreign bondholders.

What is ironic is that the United States itself is by far the world’s largest international debtor. It has turned the dollarized system of international payments into a way to make other countries finance its global military spending by making the foreign reserves of the world’s central banks take the form of loans to the U.S. Treasury – holdings of U.S. Treasury securities, U.S. bank deposits and other dollar-denominated assets. That is the buttress of today’s debt-based Dollar Hegemony. To break out of this dollar trap, China should stand with other independent nations to develop a new system of international payments and formulate new principles of international law for trade and investment relations. These principles require an overall economic and political doctrine along the lines described in this book.

What I find strange is that despite the West’s economic, political, social and cultural problems stemming from its neoliberal anti-classical ideology being obvious for many years, many people in China still look to Western schools and leaders for guidance, as if their own native institutions, civilization and even their own race are inferior. The defeat of a country starts with the defeat of the people’s self-confidence in its institutions. Yet as an American scholar, Professor Hudson, who has studied U.S. finance his entire life and worked on Wall Street for decades, recognizes China’s institutional advantages. As long as we have the scientific spirit to continue self-reflection, self-correction and self-enhancement, there is no reason not to believe that China’s social organization and its ideology of Common Prosperity can lead its society toward a higher form of civilization. The key is to pursue our institutional advantage and abandon the shortcomings of the post-industrial Western rentiereconomies, not follow the Western neoliberal path and fall into dependency on the U.S. hegemony and ideology that has ground prosperity to a halt in most Western economies, subjected as they are to debt-ridden austerity.

Behind today’s finance-capitalist crisis is thus a profound civilizational crisis. The world is at a crossroad in which all humanity now shares a common prospect: Barbarism or Ecological Civilization.