Yves here. I am a bit surprised to see the assertion in this piece, that there has been relatively little work done on the political effects of financial crises. I recall reading and being told more than once after 2008 that the typical response, in the absence of government action to alleviate the pain, is a strong shift to the right, which we’ve seen in Europe and the US.

Financial crises have severe economic costs. This column shows that they also entail major political costs. It argues that the global financial crisis, and associated Great Recession, represents a watershed for populism in Europe, changing people’s views and the rhetoric of all parties. The crisis brought economic insecurity to the middle classes, which had largely remained untouched by the globalisation and immigration shocks. Disillusionment with the status quo prompted parties to enter the political arena on populist platforms.

Financial crises are a recurrent phenomenon in the history of emerging markets and advanced economies alike. However, there has not been much research into their consequences outside the realm of economic variables. Generally, there is still limited knowledge on the political economy of financial crises – exceptions include the contributions by Fernandez-Villaverde et al. (2013a, 2013b), McCarthy et al. (2013), and Mian et al. (2010a, 2010b, 2012, 2014).

In a recent paper (Guiso et al. 2022), we argue that the 2008 financial crisis and the associated Great Recession were a major factor in the spread of populism in Europe in the 21st century.

Much has been written about the role played by the onset of globalisation and automation which, by causing job losses mostly in low-skilled sectors, created disillusion in voters in liberal democracies, gradually changing in the demand for policies. For instance, Rodrik (2018) traces the origin of today’s populism to the globalisation shock, while Autor (2020, and references therein), Colantone and Stanig (2018a, 2018b), and Jensen and Bang (2017) are clear examples of well-identified effects of the China shock on specific manifestations such as Brexit.

In these studies, the financial crisis is treated as another factor that further enhanced voters’ appetite for populist policies, without focusing much on the exact mechanism and on which segment of society was most affected by it – see, for instance, the review by Dani Rodrik here on Vox (Rodrick 2019).

Financial Crises Are Fundamentally Different from Globalisation and Automation Shocks

While globalisation and automation create losers, there is no doubt that there are also winners. Furthermore, global trade has meant not only job destruction and lower wages for blue-collar workers in firms hit by foreign competition, but also lower prices for the final goods entering consumers’ consumption bundle (and firms’ intermediate inputs). This is not true for financial crises. Recessions induced by a financial crisis largely lack beneficial effects – most people, across the spectrum of the voting population, lose. Income losses tend to be deep and universal. Hence, the discontent fostered by the ensuing economic insecurity tends to be more pervasive and thus politically relevant.

Figure 1 plots a measure of the evolution of average economic insecurity in the 28 European countries covered by the European Social Survey (ESS), setting its level at one in 2002 (the first sample year). While economic insecurity had already increased in the years before the financial crisis when globalisation was unfolding, it spikes in the years of the Great Recession and the European sovereign debt crisis, but then drops sharply after the crisis in 2014. Globalisation and robotisation, which are secular trends not business cycle phenomena, cannot explain this drop. 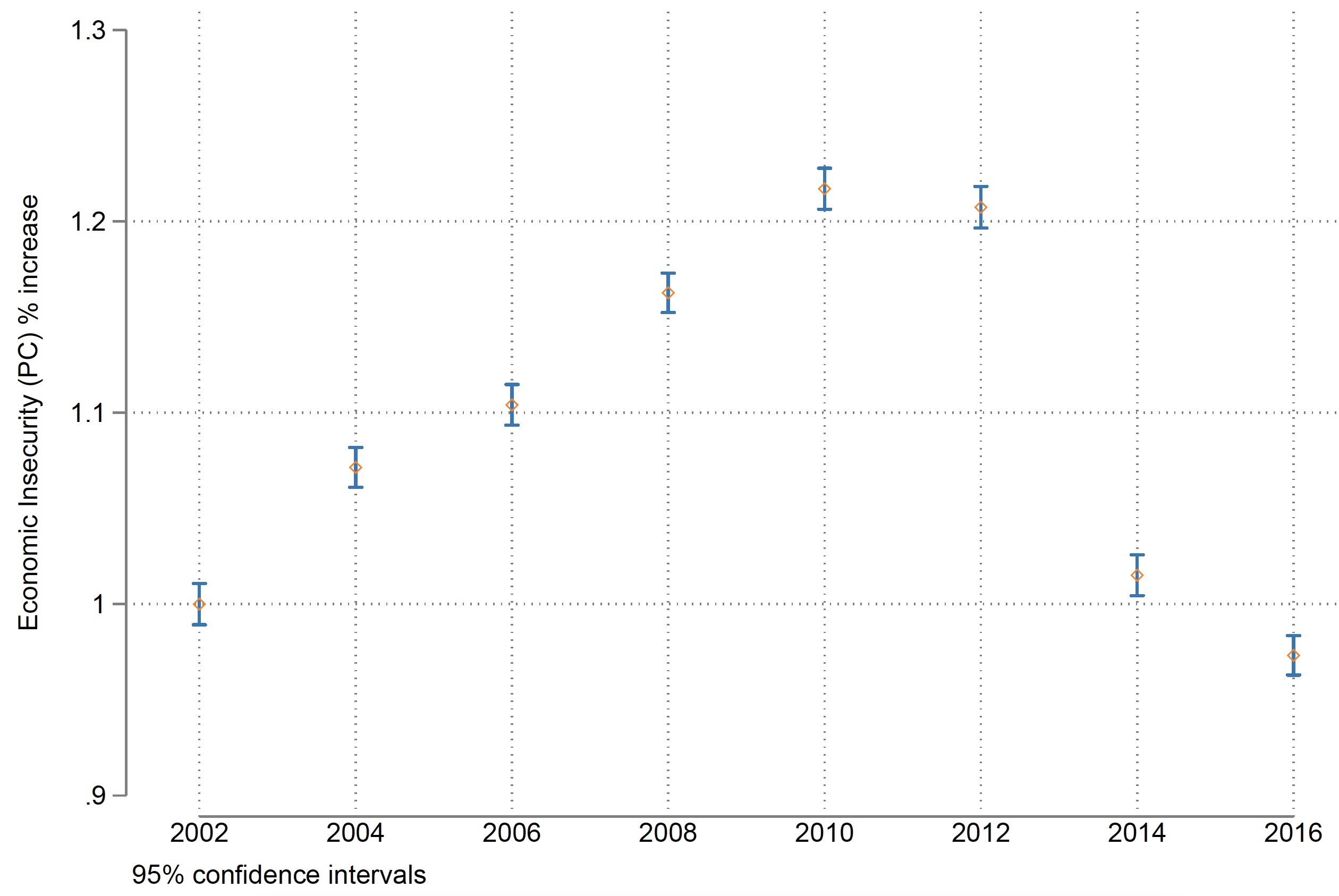 Notes: The graph plots the evolution of a measure of average economic insecurity (and its 95% confidence interval) in the 28 European countries covered by the European Social Survey. Its level is set to one in 2002.

Effect on the Middle Class

The composition of those suffering serious insecurity also changed after the onset of the crisis in 2008 and extended to segments of the population that were less hit by the globalisation shock. Figure 2, Panel A shows the share of blue and non-blue collars in the top quartile of economic insecurity in each year of our sample. Prior to the financial crisis, in the years of the globalisation wave, the incidence of blue-collar workers among those experiencing high insecurity is dominant (66% on average); in the years after 2008, the share of non-blue-collar workers increases substantially, by more than eight percentage points compared to the pre-financial crisis years. Panel B shows that the financial crisis injected economic insecurity in the middle class as well (defined as people in the middle 50% of the income distribution of income in each country-wave). The share of middle-class voters suffering serious insecurity (i.e. in the top quartile of insecurity) climbs rapidly in the years of the Great Recession. Thus, the financial crisis not only increased insecurity among social strata that were already distressed by globalisation and the like prior to the crisis (typically blue collars and low-skill workers at the bottom of the income distribution), but also extended insecurity to segments of the population that had been more sheltered from globalisation. Notes: Panel A plots the share of blue and non-blue collars in the top quartile of economic insecurity in the years of our sample. Panel B shows the share of people in the middle 50% of the distribution of income in each country-wave.

Importantly for economies like those of the advanced Western countries where both firms and households are heavily dependent on finance, financial collapses are particularly hard to cope with. One important mechanism to buffer income shocks in these economies – borrowing in the market – is hampered by crisis, as financial markets stop working smoothly and financial constraints become more binding. In addition, the fall in asset prices caused by the crises impoverishes any precautionary savings workers may have accumulated, limiting their capacity to deal with economic insecurity.

Our main point is that the European financial crisis created new classes of disillusioned voters. The economic insecurity triggered by the financial crisis had a causal effect on voters’ trust in political parties, on turnout, and on voting choices. We also document an increase in abstention especially among those who had not already been hit hard by globalisation.

Financial crises are most damaging for people that depend more on borrowing to buffer income shocks and thus to manage economic insecurity. Financial shocks hamper the ability to borrow of people dependent on credit. These are often individuals that also belong to segments of the middle class, thereby significantly enlarging the pool of voters who seek protection and doubt that the status quo governance of the economy can deliver it. In turn, dependence on borrowing varies across individuals as a function of the steepness of their age-earnings profile: people with a steeper profile must rely more on borrowing to smooth consumption, which makes them more vulnerable to financial shocks.

Our analysis suggests that the financial crisis broadened the pool of disappointed voters, prompting, on the supply side, political parties to enter the political arena with platforms giving the disillusioned voters a new hope for simple and monitorable protection. Indeed, the moment of maximum entry and transformation of parties in Europe is in this period. 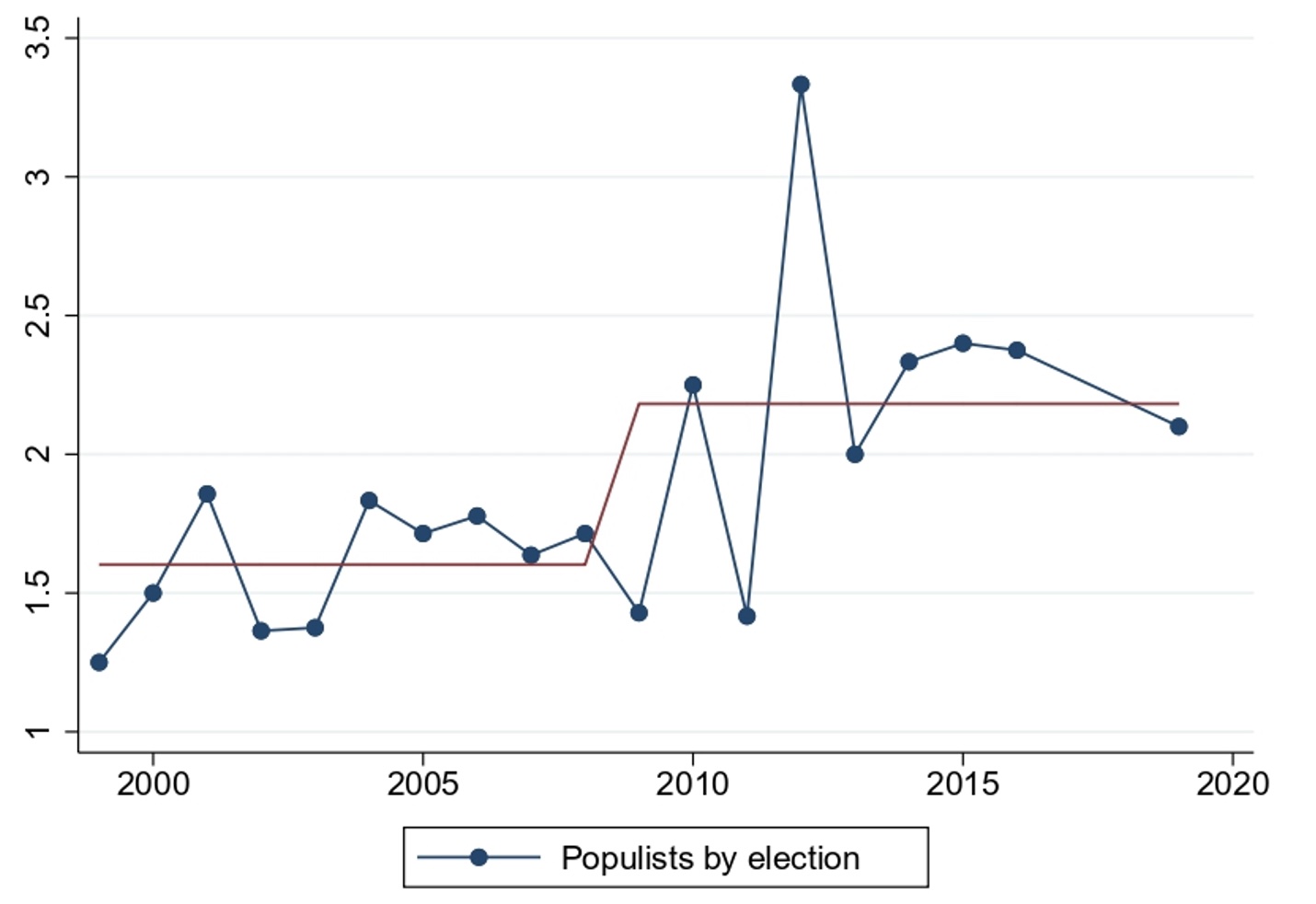 A novel analysis of the dynamics of the supply of populism in Europe, looking at the manifestos for all European parties and distinguishing long-lived parties (present both before and after the financial crisis) from parties that died or were born with the crisis, confirms that much of the exit of old parties and entry of new populist parties, as well as much of the transformation of platforms of parties that became populist but were not counted as such before, happened after the financial crisis.

We argue that the financial crisis was a tipping point that has transformed politics in Europe, on the demand as well as on the supply side. The fact that since the crisis (i.e. after 2014), populism has persisted in Europe suggests that it created a structural break – a tipping point which is hard to recover from – by changing people’s views and the rhetoric of all parties. It remains to be seen whether this wave of populism will transform politics in Europe permanently – a possibility that studies of past historical episodes suggest cannot be ruled out (Funke et al. 2021).