Fourth of July weekend no doubt seems a weird time to appeal to readers to help someone in distress. But adversity has no respect for calendars. If you are fortunate enough to be having a pleasant holiday weekend I hope you’ll be generous and go to Betty-Jo’s Go Fund Me page right now. Any amount, even $5 would be appreciated, but if you can give $25 or $50 or $250, even better.

Since I’ve come to the South and hired aides for my mother, I’ve seen more of the hardships that the working poor face, and they seem to be much worse than in New York, where social safety nets are better. So as much as the US needs fundamental reforms, in the meantime we have pressing cases in the here and now. 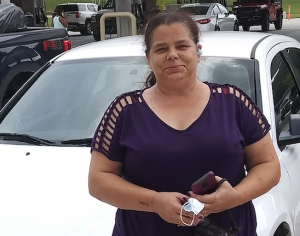 Despite her Southern-sounding name, Betty-Jo is from the northeast, of Blackfoot and French stock. Her past life includes working in her mother’s home cleaning business, driving a taxi in New York City and later in Birmingham, working at Dollar General and making deliveries for Dominos Pizza.

Betty-Jo was my deceased mother’s best aide, always cheerful and a hard worker. She’d come in most mornings to get my mother out of bed and take care of her during the day, even though my mother was wheelchair bound and it would take muscle to transfer her, while Betty-Jo has a rod her lower back and walks with a limp.1

Betty-Jo was proactive, anticipating my mother’s needs and taking it upon herself to perform additional tasks, like diagnose and sometimes even treat car issues (she and her deceased husband had a yard care business and three-bay car repair shop). She was also the only aide to press and sometimes succeed with getting my self-professed couch potato mother to perform her physical therapy exercises. Betty-Jo never missed a session, coming even when she had migraines (my mother would send her home early then) or when her back was bothering her.

I’ve continued to employ Betty-Jo, at even higher rates since she is task focused on my estate-related duties, while caretaking involves some idle time. Betty-Jo would try not to talk about her health and financial problems but they’ve become too pressing to ignore. She had brain cancer 11 years ago that had metastasized. She had an operation and then chemo and radiation therapy. Even though her treatment did get the cancer, the radiation therapy damaged her liver. She was also left with medical debt which she kept paying even after the statute of limitations has expired (Betty-Jo is very skilled about mechanical matters but is unsophisticated about the law).2 Low income people are already in a precarious position and debt puts them on a treadmill. They often wind up incurring new debt or get behind on expenses to meet other obligations.

Betty-Jo has had a run of bad luck. Her old car had failed but she was able to use unemployment money to buy a not terribly expensive used car. But she didn’t buy comprehensive coverage. The car was hit within two months of her buying it by drunks with no insurance, expired drivers’ licenses, and even expired car tags. She needed a car for her aide and taxi work and had to buy again when used car prices had jumped sharply due to Covid. Her purchase was a borderline lemon and has needed more repairs than it ought to.

Betty-Jo has also not been able to afford her liver shots on a consistent basis. That plus stress due to her partner of six years leaving her to go back to Atlanta3 (the emotional blow, the having to move, the obstacles to her getting a lease) crashed her white cell count. Her soon-to-be-ex found her passed out on the floor; she’d apparently been there for four hours. He took her to the hospital. The hospital tossed her out after one night, saying they would have kept her longer if she had health insurance.

Betty-Jo has been in terrible shape for three weeks, unable to keep down one of the medications and having intermittent migraines.4 Nevertheless, her white cell count is getting better and her energy level has improved, so she is on the mend. But the loss of income and the incoming medical bills have made her bad situation much worse. And the added stress isn’t helping her recovery.

Without my help, she would be living in her car at the end of July. But what I can give her isn’t enough to pay for her medical emergency, her treatment going forward, and get her head enough above water that she can put down a big enough deposit to rent a studio.

Please help. She’s become important to me. I hate seeing someone who has no malice and is industrious and conscientious wind up in such a desperate state due to how our medical system places profit over people. Go to GoFundMe. Your gift will make a difference.

One reader told a story from his childhood, when he went with his father to the beach. They saw newly-hatched turtles trying to get to the sea. The boy exclaimed, “Dad, they won’t make it. They will die.” His father said, “Not this one,” as he carried it to the water.

Update: It’s 5:30 AM and we already have donations coming in! Thanks SO MUCH!

1 Betty-Jo’s late-teens boyfriend ran over her because she hadn’t gotten back from an errand for him fast enough, snapping her spine just below her rib cage. She said there were tire marks on the dress she was wearing. She was paralyzed below her waist and told she would never walk again. Three years after the assault, she had the back surgery that enabled her to use her lower body again.

2 You might ask why she did not declare bankruptcy. That costs money and she came from a circle where no one does that, I suspect it never occurred to her. And she never would have been able to work for Dollar General had she done so, and that position did give her health insurance and a not-bad income before they fired a lot of staff during Covid.

3 Far more detail than you want to know, but short version is the pretext is to take care of his mother, but his mother and his relatives have made clear they are not happy about how he is treating Betty-Jo.

4 IM Doc says liver meds can do that. I’m getting the name of what she is taking.