We — I’ll use the royal “we” here — at NC have long been aware that analysis and coverage of Russia’s tactics and strategy in Ukraine that is not dictated by organs of state security here in the United States is an inverted pyramid resting on a very small point: A small group of dissidents willing to go on the record with their views. These dissidents — Mercouris, Military Summary, Martynov, Moon of Alabama, Lira, New Atlas, and Ritter, among others — are all variously monetized and have been marginalized in one way or another, and their analysis rests in turn on an even narrower point: Telegram accounts and Russian/Ukrainian sources that are not available to us. But now we have evidence that the dissidents are not alone, and analysis parallel to their own has been taking place.

It was with a sense of relief and amazement that I noticed the following outraged Tweet occur on my timeline: 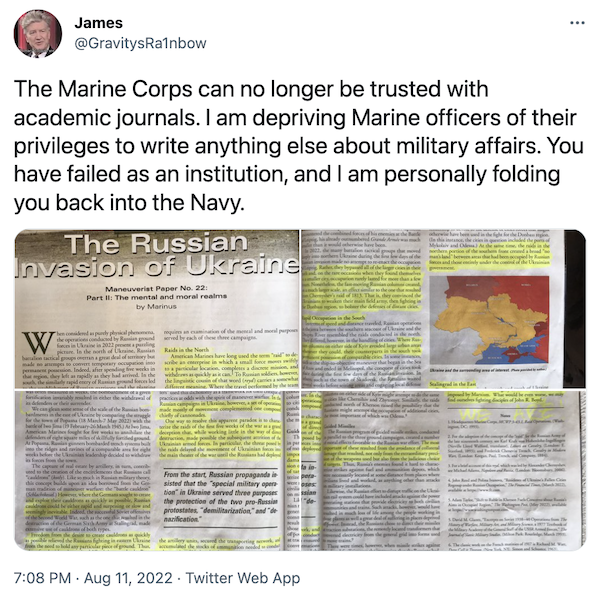 (I’m not including the actual tweet because it contains readable images of the entire article I am about to example, which I think goes beyond fair use, but here is a link to the tweet, which is sadly not in the Internet Archive.)

Hmm, I said. “The Russian Invasion of Ukraine.” In a thing called “Marine Corps Gazette” (MCG). I’d better go find it, I thought. First, I encountered the MCG paywall. A search on the author, “Marinus,” yielded nothing useful. Next, I searched for the subhead: 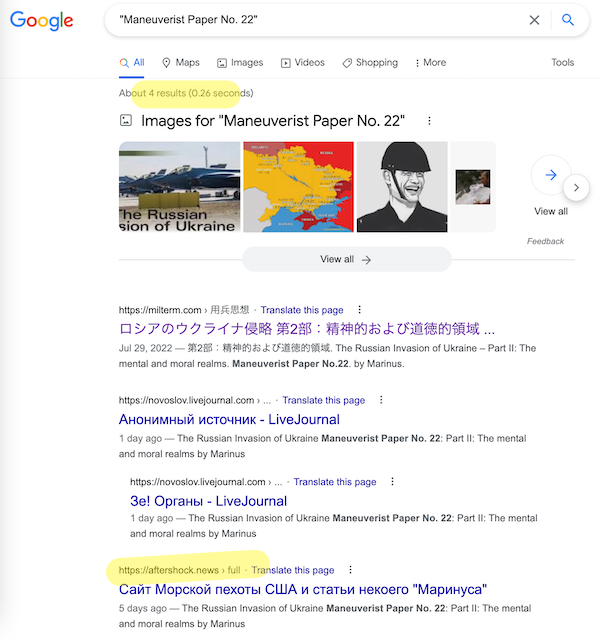 Four hits, one in Japanese, three in Russian. Not very promising! So I went another hop out to the article in Aftershock (fourth on the results list), a Russian-language aggregator, and read the comments thread, where I found a quotation from the article in English, which gave me a string to search on (“The most important of these resulted from the avoidance of collateral damage”), giving me some hope that I could find a full text version of the article. Here are the results: 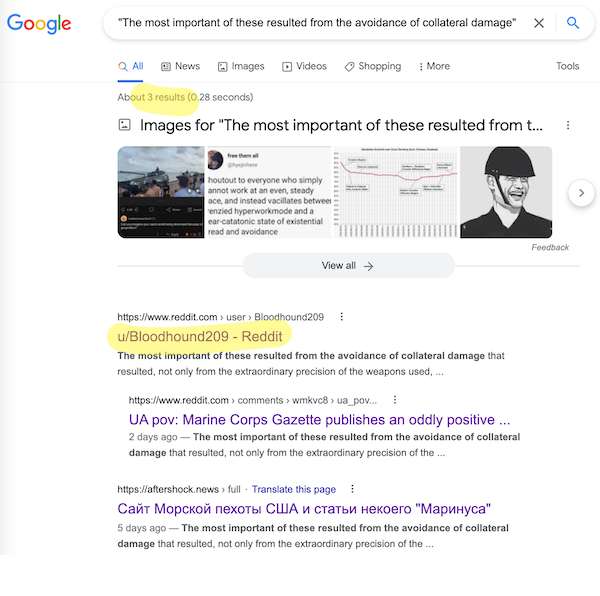 Two from Reddit (August 12), and the known article at Aftershock (August 9). The Reddit article does not include a full text version, but does include an eBook-like reader where you can click through each of the four pages, along with a not very illuminating discussion.

So, let’s back up and ask ourselves what the Marine Corps Gazette is. From Small Wars Journal:

Marine Corps Gazette is a professional journal for U.S. Marines founded in 1916 at Marine Corps Base Quantico for members of the United States Marine Corps. Begun by then Col John A. Lejeune as the vehicle to launch the Marine Corps Association (MCA), the journal is known as “The Professional Journal of U.S. Marines”. Today the MCA continues to publish the Gazette….

And the Marine Corps Association (MCA):

The Marine Corps Association (often abbreviated MCA) is the professional organization for members of the United States Marine Corps and friends of the Corps.

This is August 14. “Marinus”‘s article in the August issue of MCG has been available since July 29 at the latest, the first hit at the Japanese source. The second hit appears on August 9, in a Russian-language aggregator. The third appears August 12, on Reddit. It’s been two weeks, and the media, collectively, have a ravenous news hole. So where is the coverage the Times? Where is the Washington Post? Where is Foreign Policy? Where is Foreign Affairs? Where is The Atlantic? Where is the Council on Foreign Relations? Where is the Institute for the Study of War? Where, further afield, is Defense One? The Drive? They are all silent. And yet what we have, as the quote in the headline to this post alone shows, is a significant break from orthodoxy on Ukraine and Russian capabilities generally in the professional magazine of the United States Marine Corps. Odd, very odd!

The rest of this post will be very simple. I’m going to fair-use slabs of the text as graphics, and not necessarily in order. (An enthusiastic reader, not me, has done a lot of highlighting.) Most, if not all, of the points made by “Marinus” will be familiar to readers, whether from Yves’ posts or from comments. I’m not going to give any hat tips, for reasons that I assume are obvious from the current climate of opinion. People may, of course, choose to do their own happy dances in comments (ideally with links). I also encourage readers to comment on the substance of the piece!

First, the avoidance of collateral damage: 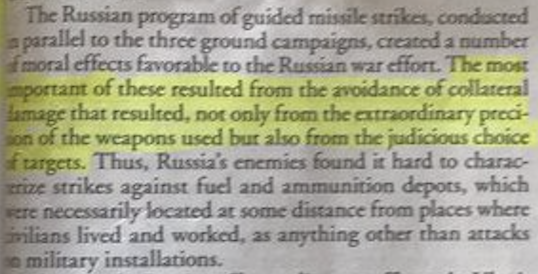 Second, the relatively gentle treatment of the rail system:

I’ve always been a little non-plussed with all the claims of Russian brutality — beyond the brutality of war itself — when the trains are still running, the electrical power grid is still on, the Internet functions, and there’s potable water. Very different from, say, Fallujah. (Granted, the Russians want to integrate the Zaporizhzhia power plant into their own grid, but that’s consistent with their policy of making outcomes more stringent the longer the war goes on.)

Third, artillery really is “the king of battles”[1]:

(Sorry for the ugly join, there.)

Fourth, Kiev really was a “feint” (or “raid,” as “Marinus” characterizes it). 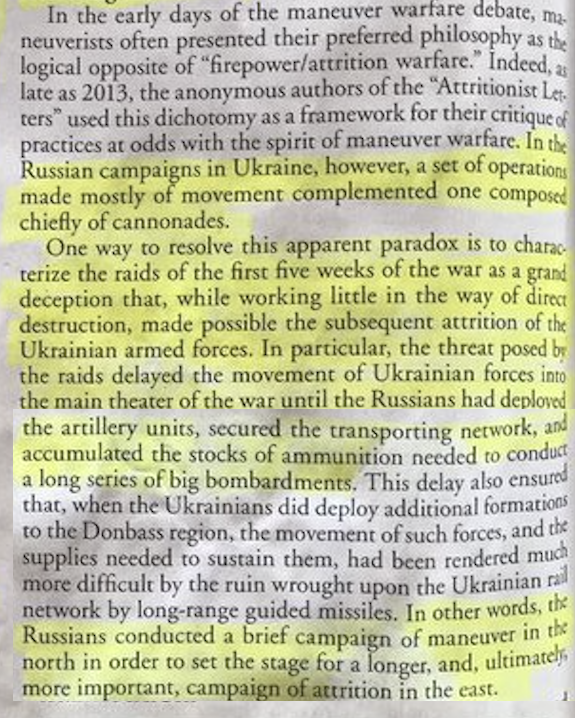 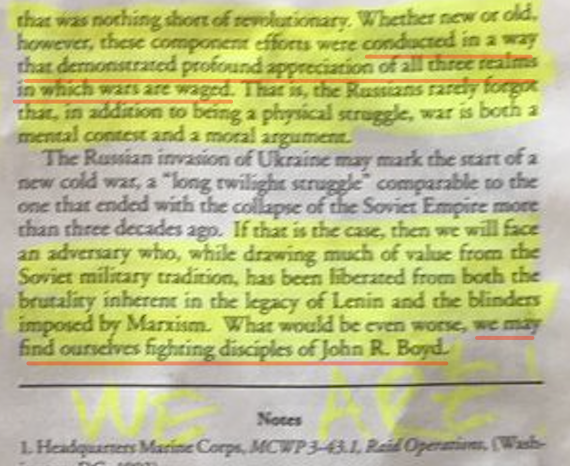 I wonder who “Marinus” is. Probably another Colonel or Lieutenant-Colonel who couldn’t, or couldn’t bear to, climb the greasy pole to become one of the loser Generals (Iraq, Afghanistan) at the Pentagon. I encourage you to read the whole piece, which you can do either at the original tweet or on Reddit. It contains a more sophisticated argument on Russian doctrine than I have been able to include here.