Before those of you who are in “I’ve got mine” mode about the widely anticipated announcement that Biden will be forgiving $10,000 of student loans for every borrower making less than $125,000 a year: your humble blogger has for many many years advocated debt relief along with fundamental reforms of the student loan program.

This Biden scheme doesn’t even rise to the level of a band-aid over a gunshot wound. It leaves the system that has grotesquely inflated the cost of higher education. For any child not born of affluent parents (or say getting a very hefty scholarship), the choice is foregoing college or taking on a lot of debt. Long gone are the days when kids could earn enough to go to a pretty to very good state school by working over the summer. Why not direct less money to debt relief, particularly as we’ll discuss soon, it is mainly a subsidy to the better-off, and start giving more Federal support to state colleges and universities?

And this grotesque system, of loading up young people with debt even before they’ve made key life decisions, like where to live, whether to get married and have kids, has created a new rentier class, in the form of a greatly enlarged and overpaid cohort of administrators…who have a very strong propensity to vote Democrat. So Biden has kept the subsidies to this voter block very much intact by refusing to do anything about out of control, unsupervised lending.

Remember: nothing, not a single thing, is being demanded of banks who made questionable student loans or the schools who gave students unrealistic information about their future earning prospects. One would think it would be a no-brainer to impose automatic penalties on lenders and schools whose borrowers had delinquency rates over a certain level, and inspected the next tier and imposed fines for bad practices.

So what are we going to do, keep throwing money at a bloated, elitist higher educational complex, and then pretend that this isn’t as grotesque a system as it appears to be by large scale writeoffs every decade or so? Doesn’t the magnitude of the debt cancellation say the time is overdue for root and branch reform? But oh noes, can’t break those rice bowls.

Or how about, as we and many other proposed, having student loans be dischargable in bankruptcy, as they were before the 2005 bankruptcy “reform” that Biden, as Senator from MBNA (a major credit card lender) helped push through? Businesses that make bad decisions get to restructure their debts and carry on. Individuals who have a run of bad luck (big medical bills, job loss, divorce) can also either write off their debts or enter into a court-supervised repayment plan…except for student debt. It’s perverse to have this one type of lending be carved out as sacrosanct.

Even though the Biden scheme is means-tested, it isn’t all that much, with the result that the program mainly benefits higher-income borrowers. Biden is expected to announce debt relief of up to $10,000 to borrowers earning up to $125,000, as well as extending the debt payment freeze that started in March 2020 another four months.

One can take the cynical view that capping the amount of debt cancellation was designed to favor more affluent borowers. For starters, the relief could have been means tested more strictly, with the $10,000 stopping at $80,000, and allowing even higher loan cancellation amounts to lower income borrowers. Instead, as the Tokenist notes:

For several months, Democratic lawmakers, labor leaders, and civil rights organizations have pressured the White House to cancel more than $10,000 in student debt. They allege that black or lower-income students are disproportionately carrying greater debt loads. The model estimates that households in the top 60% of the US income distribution would get between 69% and 73% of any debt forgiveness…. 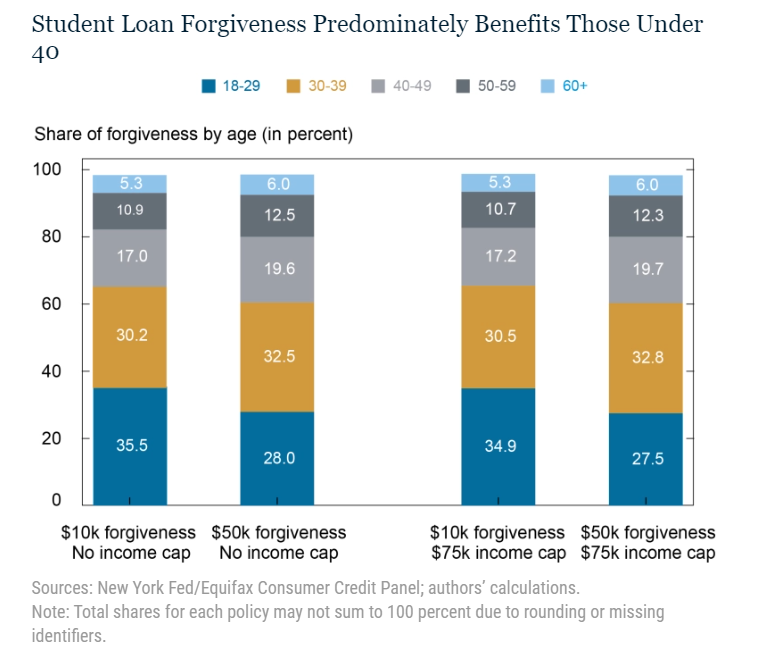 According to the New York Federal Reserve, Americans aged 25 to 34 are most likely to have student debt. The chart above also shows that only 57% of student loan debt is held by borrowers under 40, although 67% are under that age. This indicates that individuals with higher balances are more likely to be older.

How about the politics? This measure sure looks like it intended to boost Democratic party fortunes in the runup to the midterms. But how much of a difference will it make? The college-educated skew to Democrats already. Conversely, the young tend not to be big on turning out to vote at midterms. If they do, the trigger is more likely to be abortions, particularly in “purple” states where attorney general, district attorney, and state legislature elections will be seen as important.

Some Republicans argue that the debt cancellation could trigger a backlash; a contact in Ohio say that non-college educated workers in Youngstown see this as a reminder than their needs don’t count. A new CNBC poll found that 30% of voters believe student debt should never be forgiven. We’ve seen some of our readers get very upset because they did pay off their student loans in full and don’t see the justification for selective relief.

But one widely believed canard is that this debt break will be inflationary. The aforementioned CNBC poll found that 59% were concerned. If student borrowers were paying on a current basis, that could be the case. But remember, what matters most for inflation is what happens in the next 6-12 months, since the Fed is determined to kill the economy stone cold dead and may succeed. And even if not, we’ve shown how this inflation is not the result of too much demand, but supply factors like high energy prices, supply chain breaks, and many workers still staying out of the labor market.

Remember, student loan borrowers have had their payments on hold since March 2020. So this payment cancellation will not add to their present spending power, but prevent a charge from resuming. And if the Biden Administration hadn’t cancelled some debt, it would likely have extended the payment moratorium longer or ended it gradually.

If we have protracted inflation, and it looks like too much demand is becoming a driver, then yes, this debt break could make a difference. But those conditions are not now operative and they may not become operative.

In the meantime, the politics bear watching. Republicans will try to stoke jealousy. And they might succeed.