If we only had eyes to see Times Literary Supplement

DRIED UP: Lakes Mead and Powell are at the epicenter of the biggest Western drought in history The Hill

This 17-Year-Old Designed a Motor That Could Potentially Transform the Electric Car Industry Smithsonian. “His winnings from [Regeneron International Science and Engineering Fair] will go toward college tuition.” All this, and brutal gatekeeping, too!

Summary of Guidance for Minimizing the Impact of COVID-19 on Individual Persons, Communities, and Health Care Systems — United States, August 2022 CDC. Handy chart, which I have helpfully annotated: 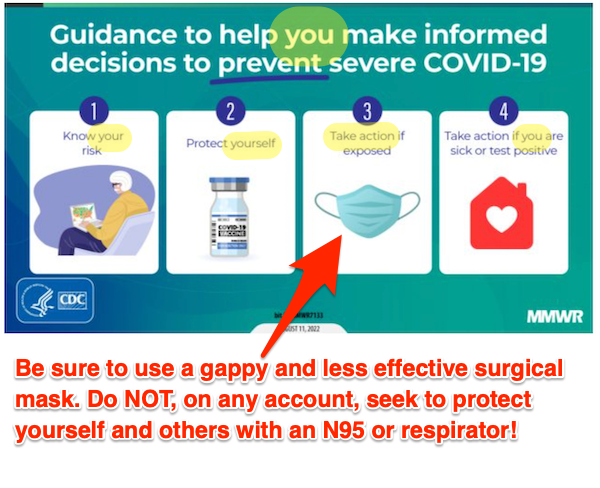 You, you, you, you, you. Nothing about protecting others (let alone the “public”). The “Center for Disease” continues to grovel before the sociopathic libertarians of the Great Barrington Declaration.

CDC loosens coronavirus guidance, signaling strategic shift WaPo. “Signal,” a good Beltway word. “The new recommendations signal that the Biden administration and its medical advisers have decided that the lower fatality rate from covid-19 in a heavily vaccinated population permits a less demanding set of guidelines.” And by “lower fatality rate”, they mean the existing fatality (and infection) rate — remorselessly chronicled in Water Cooler — which — tinfoil hat time! — they wish to preserve. Equally, they wish to weaken all forms of non-pharmaceutical intervention in preparation for the next surge, a pattern we have seen over and over again [bangs head on desk].

Covid isn’t done with us, whatever the CDC says NBC

Genomic epidemiology of the first two waves of SARS-CoV-2 in Canada eLife. From the Abstract: “We investigated the effectiveness of international travel restrictions at reducing SARS-CoV-2 importations and transmission in Canada in the first two waves of 2020 and early 2021…. Of the sublineages seeded during the first wave, 49% (46–52%) originated from the USA and were primarily introduced into Quebec (39%) and Ontario (36%), while in the second wave, the USA was still the predominant source (43%), alongside a larger contribution from India (16%) and the UK (7%). Following implementation of restrictions on the entry of foreign nationals on 21 March 2020, importations declined from 58.5 (50.4–66.5) sublineages per week to 10.3-fold (8.3–15.0) lower within 4 weeks. Despite the drastic reduction in viral importations following travel restrictions, newly seeded sublineages in summer and fall 2020 contributed to the persistence of COVID-19 cases in the second wave, highlighting the importance of sustained interventions to reduce transmission.” So the obvious policy implication, in which the United States has deservedly taken a global leadership position, is to eliminate travel bans and minimize non-pharmaceutical interventions. Well done, all.

SARS-CoV-2 evolution and patient immunological history shape the breadth and potency of antibody-mediated immunity (accepted manuscript) The Journal of Infectious Diseases. n = 41,000 serum samples. From the Abstract: “We show that the breadth and potency of the antibody-mediated response is influenced by the number, the variant, and the nature (infection or vaccination) of exposures, and that individuals with mixed immunity acquired by vaccination and natural exposure exhibit the broadest and most potent responses. Our results suggest that the interplay between host immunity and SARS-CoV-2 evolution will shape the antigenicity and subsequent transmission dynamics of SARS-CoV-2, with important implications for future vaccine design.” Remember when mRNA was just like software, and we’d roll out new versions rapidly? Good times.

Persistent capillary rarefication in long COVID syndrome Angiogenesis. Observational study, n = 58, controls n = 16. From the Abstract: “Recent studies have highlighted Coronavirus disease 2019 (COVID-19) as a multisystemic vascular disease. Up to 60% of the patients suffer from long-term sequelae and persistent symptoms even 6 months after the initial infection…. A newly developed version of Glycocheck™ software was used to quantify vascular density…. A µm-precise analysis showed a significant decrease of vascular density, that exclusively affected very small capillaries… Our current data strongly suggest that COVID-19 leaves a persistent capillary rarefication even 18 months after infection. Whether, to what extent, and when the observed damage might be reversible remains unclear.” A vascular disease that presents as respiratory?

Looks like some movement on Bharat’s nasal vaccine, BBV154:

Here’s what I have so far. Wipro leadership is tweeting about BBV154, who’s been involved in healthcare deals before. A Wipro Rep meeting w/ IMBC for several months including a pharma visit. We also have the big honcho @RishadPremji followed by Dr. Ella since she added Ocugen. pic.twitter.com/u6qWJWk9Pv

Asymptomatic monkeypox virus infections among male sexual health clinic attendees in Belgium (preprint) medRxiv. From the Abstract: “In stored samples from 224 men, we identified three cases with a positive anorectal monkeypox PCR. All three men denied having had any symptoms in the weeks before and after the sample was taken. None of them reported exposure to a diagnosed monkeypox case, nor did any of their contacts develop clinical monkeypox…. The existence of asymptomatic monkeypox infection indicates that the virus might be transmitted to close contacts in the absence of symptoms. Our findings suggest that identification and isolation of symptomatic individuals may not suffice to contain the outbreak.” Oh, good.

Xi Sought to Send Message to Biden on Taiwan: Now Is No Time for a Crisis WSJ

The Inside Story of Carlos Ghosn’s Brazen Escape From Japan WSJ. Musical interlude.

Lady’s Slipper Orchid: The Meghalayan Orchid That Was Popular With The English Madras Courier (J-LS).

AMLO’s way Africa is a Country

In the Ukraine war, a battle for the nation’s mineral and energy wealth WaPo. “Ukraine harbors some of the world’s largest reserves of titanium and iron ore, fields of untapped lithium and massive deposits of coal. Collectively, they are worth tens of trillions of dollars.”

Ukraine and Russia Trade Blame After Rockets Hit Near Nuclear Site NYT. So Russia is shelling a power plant it wants to connect to its own grid?

The VKS has a bad habit of leaving piles of munitions next to parked aircraft, including ones that are fuelled and armed. My working theory is that Ukrainian loitering munitions or saboteurs caused an initial fuel fire that engulfed either piles of bombs or armed aircraft..
(3/4) pic.twitter.com/GwFlZ3TXKG

(Note the source is from the Royal United Services Institute, which wrote that very good piece on industrial warfare.) Tossed cigarette, BOOM!!!!! #StupidThingsGuysDo is, amazingly, not a hashtag on the Twitter.

The Beginning of History (not paywalled) Foreign Affairs

“Well he would, wouldn’t he?” —Mandy Rice-Davies. But what is the worth of a heuristic that applies to all the players?

Eric Trump reveals HE told Donald FBI raided Mar-a-Lago: Ex-President’s son claims agents ‘ransacked his dad’s office’ and that safe was EMPTY – and says all D.C. wants to do is ‘attack Biden’s greatest threat’ Daily Mail. If the safe really was empty, whatever was in it becomes the MacGuffin. So awesome.

Trump says he will not oppose release of documents from FBI Mar-a-Lago raid. That would include search warrant, inventory of items seized, and underlying affidavit. The Justice Dept wants to release the first two; the last, which would be most informative, it will keep secret. pic.twitter.com/H3RpGk0o7P

Garland Moves to Release Details on Search of Trump’s Home NYT. “Minutes before Mr. Garland took the podium, a top official in the Justice Department’s national security division filed a motion to unseal the search warrant and an inventory of items retrieved in the search on Monday.” Here is the motion (PDF). What about the affidavit(s)?

FBI searched Trump’s home to look for nuclear documents and other items, sources say WaPo. Sources in the lead: “people familiar with the investigation.”

Using the Nuclear Pretext to Attack Donald Trump Larry Johnson, A Son of the American Revolution. Never steal what you can’t fence.

Mar-A-Lago Assistant Manager Wondering If Anyone Coming To Collect Nuclear Briefcase From Lost And Found The Onion. March 27, 2017 (!).

So Far As I Can Make Out Patrick Lawrence, ScheerPost

Ready or not, the supply chain transformation is underway The Hill. The author is from… McKinsey, who stands ready to help you through the “transformation”….

The whole store walked out in protest.

This video has over 17 million views on TikTok. pic.twitter.com/WgObqa2ZAN

This librarian made a catalogue out of all the notes readers left behind in books CBC. 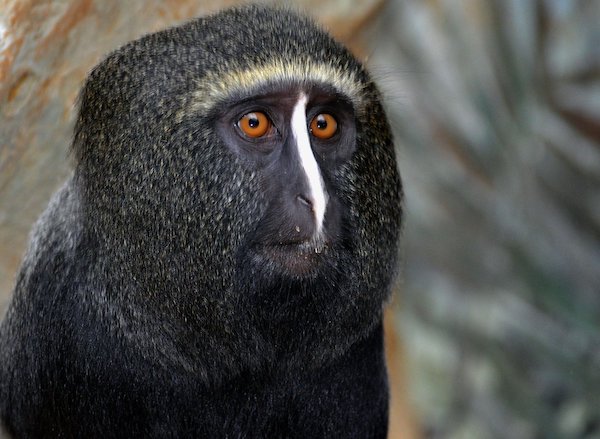