Yves here. Rajiv Sethi focuses on the likelihood that PredictIt will have to wind down operations, and the messiness and gaming opportunities that will result from having to close out contracts that expire after PredictIt ends operations. He mentions only in passing that this event would also shutter the last significant on-line election prediction market. There’s a lot of enthusiasm for prediction markets as soothsayers, but that may be as much due to the disastrous state of polls as the supposed virtues of prediction markets (pollsters have a great deal of difficulty getting anyone to answer questions, and their calling lists are skewed towards landlines, as in old farts).

Prediction markets work best when they represent the electorate well. The reason the Brexit betting markets were so wrong (they predicted a Remain win by 6 points the night before the vote) is that in gambling, the “votes” are weighted by dollars, or here pounds, as the total wagered for each side. But the actual number of bettors favoring Brexit was much larger than Remain bettors!

Over the years, I have been critical of prediction and futures markets. In particular, the specific ways certain parties misuse them (i.e., politics).

However, I am a big believer that markets can generate valuable economic and investing data that can be quite helpful when handled appropriately…

In each of these cases, we are relying on markets that are deep, diverse and trading in dollar volumes measured in trillions. This is part of my criticism about future markets: They are thin, trading volumes are anemic, the dollar amounts at risk are pitifully small. Thus, these markets are subject to failure at times.

Indeed, the excuse making for the failure of the futures market began almost as soon as the New Hampshire primary ended (see Why the Online Prediction Markets Blew New Hampshire, Prediction markets are forecasting tools of convenience that feed on advanced indicators, etc.)

None of these really looked at what makes futures markets work, how they can fail, and what their strengths and weaknesses are. This morning, I want to delve into some the problems these markets can have, why they fail, and what value they do offer.

First, Let’s start by reviewing some of the more spectacular prediction market failures:

• Iowa Primary 2004 (Howard Dean vs everyone else)

In the area of politics, I am in agreement with Dan Gross, who wrote “these are less futures markets than immediate-past markets.” In other words, bettors essentially aggregate polling data that is already out — rather than forecasting the unknown future.

When it comes to politics, its not as if the Iowa electronic market or Intrade gamblers have any special insight or inside knowledge. They don’t “know” anything — as individuals or collectively — that the rest of the public (insiders included) don’t already know. They’re all reading the same newspapers, blogs, polls, etc., and responding to whatever broad narrative happens to be coming out that day or week. They respond just as any other focus group would, off of the same information the electorate has.

I sometimes think of the political futures markets as a focus group unto themselves. Here’s where things get really interesting: When the group is something less representative of the target market, they get it wrong with alarming frequency. Indeed, the closer the traders are as a group to the target decision makers/voters, the better their track record.

The prediction market PredictIt has been operating under a no-action letter from the CFTC since 2014. This permission has now been withdrawn, and the exchange has been ordered to liquidate all open positions by February 15 of next year:

The Commodity Futures Trading Commission’s Division of Market Oversight (DMO) today announced it is withdrawing CFTC Letter No. 14-130 effective immediately. When DMO issued the letter on October 29, 2014, it took a no-action position with respect to the operation of a not-for-profit market for certain event contracts and the offering of such contracts to U.S. persons by Victoria University of Wellington, New Zealand… DMO has determined that Victoria University has not operated its market in compliance with the terms of the letter and as a result has withdrawn it… all related and remaining listed contracts and positions comprising all associated open interest in such market should be closed out and/or liquidated no later than 11:59 p.m. (EDT) on February 15, 2023.

Permission to operate was based on the satisfaction of nine conditions, one or more of which the CFTC alleges have been violated. It’s not clear what the precise nature of the violation was, but the conditions for continued operation were the following:

DMO granted the relief based upon the representations of the University that the proposed event contract market would:

PredictIt maintains that it violated none of these conditions. In an email to traders, the exchange argues that it “disagrees with the Commission’s decision and maintains that all active markets are not only within the terms of the No-Action letter but are also consistent with Commission interpretations conveyed to us over the past eight years.”

If the exchange really is to shut down in a few months, an important unresolved question concerns the resolution of markets that reference events beyond February 2023. There are many of these, with very active trading in the presidential nomination markets for the two major parties, and the outcome of the 2024 presidential election.

As an example, consider the market for the Democratic nomination, where Gavin Newsom (for some reason) is trading at 20 cents to the dollar, behind Joe Biden but ahead of Kamala Harris. The market is effectively assigning to him a likelihood of one-in-five of being the nominee. Here is the history of prices in this contract over the past 90 days: 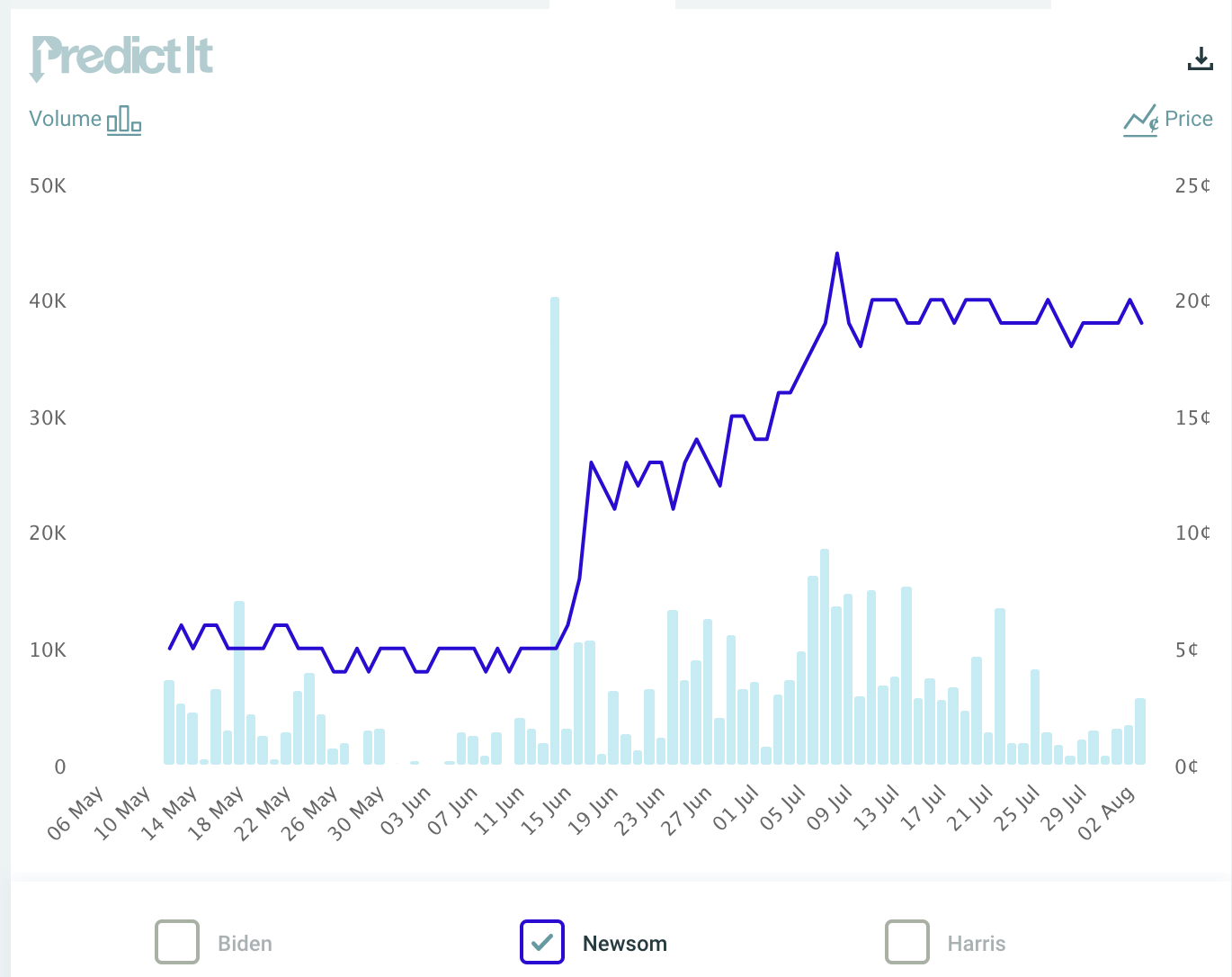 There was a huge spike in trading on June 14, with about 40,000 contracts changing hands at a price of 5 cents apiece. Someone who bought 10,000 contracts on that date paid $500, and these contracts are now worth $2,000. But since the event will not be resolved by February 2023, what is to become of this position?

The exchange will have to figure out some way of liquidating these contracts ahead of the listed termination date. One possibility that can be ruled out right away is the reversal of all transactions in such markets. Such reversal would essentially undo all trades, so the (hypothetical) trader in question would get a $500 refund and the contracts would vanish from their account. This is not possible—for example, this trader could well have sold off all contracts at various prices in the interim, withdrawn all funds, and closed out their account.

So what could the exchange do? It could halt trading at some point (with or without notice) and liquidate all contracts at the price of last trade. But there are two problems with this. It could result in people trying to manipulate the price of the last trade in ways that would result in more favorable resolution for them. And it could result in some very strange prices—for example the sum of all contracts in the nomination markets could greatly exceed 100 cents to the dollar. This happens anyway from time to time, due to the fee structure on the exchange, but the effect would be amplified dramatically as people try to game the system in their favor. The usual arbitrage-based mechanisms that keep prices roughly consistent with probabilities would be weakened since there is no guarantee that eventual resolution will satisfy the laws of probability.

So there’s a real problem here, and it’s not clear how the exchange will deal with it. Given the uncertainty, I expect that there will be a surge of withdrawals, and people with notional profits will liquidate now and cash out. But others might see an opportunity in the midst of frantic and chaotic trading. When Intrade shut down suddenly nine years ago, accounts were frozen and withdrawals halted. I expect that this time the closure will be more orderly.

But here the thing—with PredictIt gone there will be no comprehensive market-based forecasting system for elections in the United States. Kalshi is CFTC approved and regulated but hasn’t yet entered this space. The pioneering Iowa Electronic Marketsare still in operation but with very limited volume and coverage. Model-based forecasters such as FiveThirtyEight are around, of course, but it will be a bit harder to evaluate their performance relative to markets. So if there’s a good rationale for shutting down this exchange, I hope the CFTC will make it explicit at some point.

In an earlier post, I made the point that prediction markets are unusual among online platforms in facilitating viewpoint diversity, by creating strong incentives for people who disagree with each other to interact:

People actively seek information that largely confirms their existing beliefs, and social media platforms accommodate and intensify this demand. Prediction markets play an interesting and usual role in this environment. They encourage people with opposing worldviews to interact with each other in anonymous, credible, and non-violent ways. In a sense, they are the opposite of echo chambers. A market with homogeneous beliefs would have no trading volume, or would attract those with different opinions who are drawn by what they perceive to be mispriced contracts.

While most online platforms facilitate and deepen ideological segregation, prediction markets do exactly the opposite. They provide monetary reinforcement to those who get it right, and force others to question their assumptions and predispositions. While best known as mechanisms for generating forecasts through the wisdom of crowds, they also bring opposing worldviews into direct and consequential contact with each other. This is a useful function in an increasingly segregated digital ecosystem.

In fact, there is a real sense in which PredictIt gave us advance warning about January 6. Almost a month after the 2020 election, after a decisive number of states had certified their vote totals, the exchange was still giving the incumbent a one-in-eight chance of winning reelection. A common interpretation at the time was that markets had gone haywire. The truth is that there was information out there, unseen by most of us, that there was a major surprise in store.