This is Naked Capitalism fundraising week. 238 donors have already invested in our efforts to combat corruption and predatory conduct, particularly in the financial realm. Please join us and participate via our donation page, which shows how to give via check, credit card, debit card, or PayPal. Read about why we’re doing this fundraiser, what we’ve accomplished in the last year,, and our current goal, supporting the commentariat.

It is extremely hard to understand the mass psychosis at work among European leadership. A huge energy crisis, driven by the great reduction in Russia gas supplies (to become 100% if the EU proceeds with its idea of a gas price cap) and set to be compounded by the G7 bright idea, which they are refusing to drop, of a cap on the price of Russian oil. To the extent that idea works, it will work in reverse. For instance:

The planned enforcement mechanism is for UK and EU insurers to be barred from insuring Russia oil. Recall that the UK currently dominates maritime insurance. That won’t last with respect to oil. Aside from the fact that the incumbents do not want to be enforcers/inspectors, Russia, China, and other countries are perfectly able to step up. Bye bye London market share.

As we and other have mentioned, and now the mainstream media is confirming, Russian oil was already being laundered either by going through various ports and ship before getting to the EU, and also by going to places like India to be refined and then sold on. Everybody gets fat and happy at Europe’s and to a lesser degree, the US’s expense

OPEC will not let the G7 break its cartel. OPEC just announced a modest reduction of output in light of softening prices. Mr. Market took it worse than it should have given that OPEC signaled it would likely tighten and the output cut was modest. But OPEC is quite capable of turning the pain dial up if it needs to to make a point

As much as I am not a fan of trying to put officials on the couch, one way to think about the problem facing Europe is the speed of propagation of the energy crisis versus not one but three constraints: the reaction time of businessmen, the time it would take to make short term adaptions, and the time for any more meaningful remedies. Again, as we stressed in the global financial crisis, the timelines are badly mismatched.

European leaders are refusing and/or unable to recognize the severity and speed of decay There is simply no fix that will meaningfully alleviate the loss of access to so much cheap energy so quickly. It doesn’t matter what combination of subsidies and prohibitions the EU tries to implement. The economy can’t absorb electricity and gas prices at their expected levels. Yes, the shock is made worse by an EU spot pricing regime, which likely facilitates some Enron-esque gaming.

But charitably assume this picture is distorted a full 3x by bad market structure. You still have a 10X increase. By contrast, the US oil shock was only a 4x increase:

With EDF’s announcement today, French power prices for 2023 are trading €900/MWH with winter prices above €1.500/MWH (or an eye-popping 30X the 5-yr average price). I’m surprised this isn’t front-page news all over the west. #France ⁦@SullyCNBC⁩ ⁦⁦@SquawkCNBC⁩ pic.twitter.com/hwSyOSRcDB

Let us again be clear. First, this is a massive inflationary shock in economies already suffering high rates of inflation. It doesn’t matter what experts do. The actions they can take will only somewhat effect whose ox gets gored most badly.

Second, the currencies will get weaker….which will also only make the energy and import terms of trade worse.

Third, ultimately the end for higher energy prices is that they do kill demand. But to kill demand enough to lower energy use to available supply will kill most of these economies stone cold dead.

Again, the only way to prevent devastation is to make up with Russia, which the pols, press and pundits have made impossible soon enough to prevent terrible outcomes. If we are to stoop to psychological models, the most apt might be Elizabeth Kubler-Ross’ five stages of grief. Western officials are in either the denial or anger phase, which is a long way from acceptance of loss, which here is loss of US/European dominance as well as their personal reputations.

It seems at best that these officials are grasping at straws like one widely circulated but analytically rotten analysis claiming the Russian economy is on the verge of collapse1.

The only solution would be to make some sort of peace with Russia, and the current crop of officials are simply too deeply invested, emotionally and politically, in Russia/Putin demonization to do that. The UK and EU economies will be bleeding out before voters can turf out this self-serving bunch.

And mind you, it is already become too late to stop damage. Most of you have seen images, either in news stories or on Twitter, of UK and European small business proprietors showing photos of massive increases in their power bills. Many are saying they will have to shutter if this keeps up. There’s no reason for them to think it won’t. Consider this sighting from DJG, Reality Czar, from northern Italy:

First:
I go to a bakery each morning for a cornetto (croissant) or slice of focaccia (an excellent way to start a day, lots of olive oil). The bakery is well known, is very serious about bread, and has many regulars. I am a regular, and they have decided that my name is James. (That’s what the J in DJG stands for.)

They posted their bill in the window (seems to be part of a protest by middle-sized and artisan businesses):

A bakery cannot survive skyrocketing energy costs. I will check for more such signs as I make my daily rounds.

Second:
Reported in Fatto Quotidiano this morning. Assoutenti, which is a consumer-advocate group whose mission includes utilities, has created a stir: The association announced that in fact the stocks of gas that the government claims to have in place can last only 45 days. So chaos is forecast for January. This 45-period of provisioning is something that Yves Smith pointed out the other day. So we are going to hear much more about 45.

Even though the EU is having an emergency meeting on September 9, any action on energy subsidies will have to take place at the national level. Those schemes will have to be designed and then almost certainly voted through, and implemented. Households and “essential” businesses will come first. But how will that be defined?

Many energy-intensive businesses, such as aluminum smelters, stainless steel foundries, and a lot of Dutch greenhouses, have already “suspended” operations. They aren’t going to reopen at anything like full capacity until energy costs fall way back…which will be a very long time. It might be possible to mothball plant safely, but those jobs will be lost. If the workers are skilled, restarting will be easier said than done. And in the meantime, households will suffer and could slip into poverty, tax receipts will fall, mortgages and rents may go into arrears…a whole cascading down cycle.

And if you don’t use market prices to ration, you need physical rationing instead. I would assume the EU will go about that in the worst possible way, with unplanned or at best rolling blackouts. That also can be devastating…for instance, to continuous process manufacturers like papermakers who run 24/7/365 except for scheduled maintenance, and individual who rely on power to run a CPAP machine at night.

Aside from the difficulty of devising subsidy and rationing schemes on an emergency timetable which will at best only slightly blunt and forestall economic pain, there’s also the wee problem of the European electricity pricing scheme. I have yet to give it a hard look, much the less master it, but a new INET paper, Navigating the crises in European energy by Michael Grubb, has informative data and suggests some remedies. It also does a good job of unpacking the marginal v. average price/cost issue, which is a fundamental in how to think about pricing, not just in energy markets but industry generally. For instance: 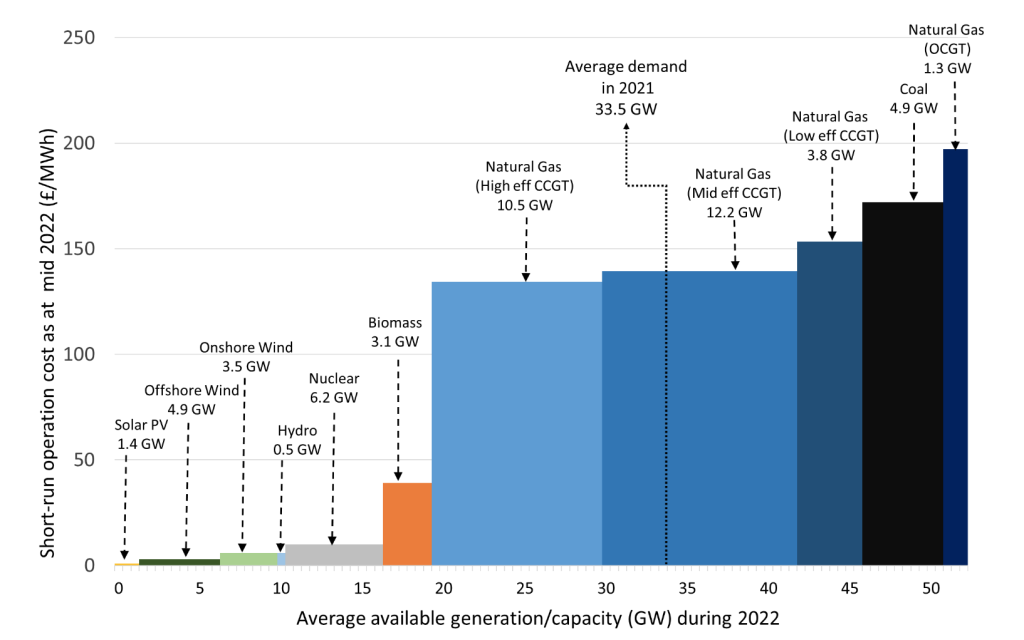 Mind you, UK gas includes gas from the North Sea. But this serves to illustrate, if nothing else, that renewables can’t come close to filling energy needs. From the paper:

Expressed in term of power, the average annual demand of 33.5 GW far exceeds the average available output of low-carbon electricity sources, so gas plants are essential to meet demand for almost all the year – and, consequently, set the wholesale price, then at around £150/MWh. In theory, the operating profits for all the non-fossil plants, to the left in the Figure, are intended to cover their higher investment cost.

But the bigger issue is this paper offers supposed remedies for the European energy crisis. The word Russia (actually “Russian”) appears only once, in an in-passing mention of the conflict.

None of these solutions can be implemented before a lot of European businesses have died. For instance, the one that ought to be the easiest would be to reform the EU electricity pricing mechanisms so that among other things, participants didn’t have incentives (or good reason, depending on your point of view) to bid up future contracts as much as they have. But any such change would require debate over alternatives, negotiation with incumbents, and changes in IT to implement the new approach. The IT issues alone means that two years would be heroically fast, and that’s clearly not even remotely fast enough.

So don’t bet on happy or even not too bad outcomes.

1 Yes, I should name and shred it but my going after it won’t change the belief in it of anyone who counts and the effort might get me on more of the sort of list that we really don’t want to be on these days. Suffice it to say that plenty of economists aren’t buying it either. I mentioned the paper to someone who is the head of economic research at a major institution and he snorted as soon as I mentioned the name.