Expectations of euro-area growth and inflation have deteriorated steadily since Russia’s invasion of Ukraine. Figure 1 shows the euro area’s slide towards expected stagflation. The European Central Bank now projects 2023 inflation at 5.5%, up from 3.5% in its June 2022 projections. Forecasts from the Organisation for Economic Co-operation and Development and the International Monetary Fund put it even higher, at around 6%. The ECB and IMF (and Consensus Forecasts) also foresee only barely positive growth in 2023, while scenarios in which the Russian gas supply to the European Union is cut completely indicate a recession with a 1% GDP decline in 2023. Since most of this supply cut has now happened, 2023 developments can be expected to be closer to the recession scenario than to the institutions’ baseline forecasts. 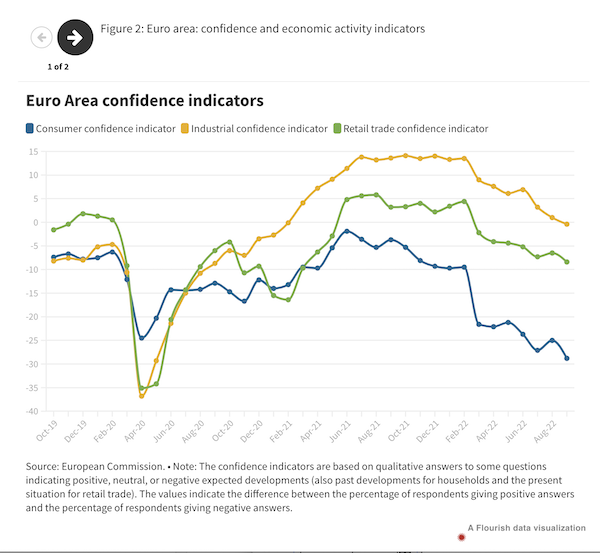 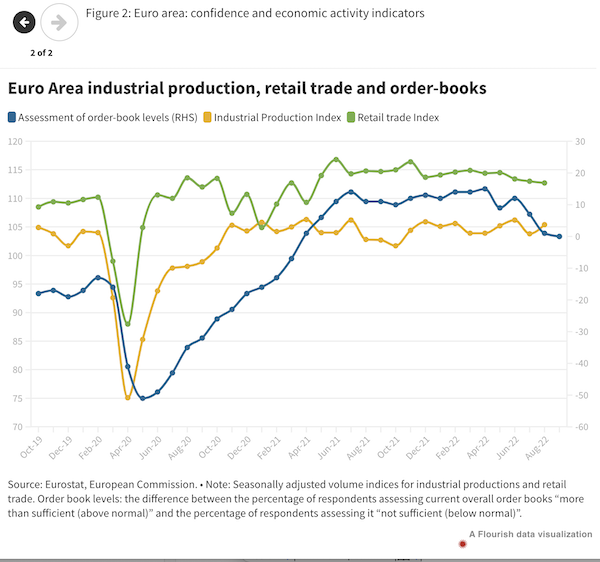 The sense that a recession is all but inevitable is driven by two factors. First, the energy price shock has been very large. Firms have faced a three-fold energy-price increase over the last year. As of August, industrial production had not started to decline, but the shock can be seen propagating through the economy in the form of lower orders, collapsing business and consumer confidence, and lower retail sales (Figure 2).

Second, monetary conditions remain accommodative, with nominal rates well below their estimated ‘neutral’ rates. But the ECB has started raising interest rates and appears set to continue, even in the face of weakening aggregate demand and falling real wages, until both actual inflation and short-term inflation expectations start falling. The full effect of the current monetary tightening will be felt in the next 12 to 18 months.

Given these expectations, can the EU only brace for recessionary outcomes, as might be caused by winter energy rationing. To the extent that there are any upside risks, can EU policymakers have any control over them? We argue they have one important tool at their disposal: the ability to influence energy prices by cooperatively increasing energy supply and reducing demand in a growth-friendly manner.

To get a sense of the macroeconomic impact if the EU energy crisis is managed successfully, we first defined some plausible scenarios for near-term energy price developments that could be influenced by policy. Second, we estimated how consumer price inflation in 2023 would react to these scenarios (see the Annex for technical explanations).

The first step is exceptionally difficult. It is not possible to provide reliable energy price projections even in normal times, let alone in the current uncertain environment related to the war, looming recession and oil producers’ efforts to keep oil prices high. We thus resorted to a sensitivity analysis (Figure 3). Scenario 1 assumes a further rise in average domestic producer energy prices in the euro area to a level 10% higher than the peak they reached in August 2022, and about 20% higher than in September 2022. In scenario 2, prices also rise, but only back to the level seen in August 2022. In scenario 3 prices are assumed to decline slightly from current levels, back to the level of July 2022. Scenario 4 sees prices drop back to the average of February-July 2022, and in scenario 5, they decline to the level of February 2022, just before Russia’s invasion of Ukraine.

These scenarios reflect a combination of luck and policies.

Bad luck would mean a complete stop of EU imports of both Russian gas and oil by the end of the year, and/or higher than average winter temperatures (some estimates suggest that a one-degree lower average temperature increases winter gas consumption by 4%).

Bad policies would mean that EU countries fail to reduce their gas and electricity demand as pledged at EU level (10% gross electricity reduction and 15% gas reduction) and fail to make use of possibilities to increase supply. In the worst case, they would restrict gas and electricity flows among themselves in an attempt to safeguard domestic security of supply, resulting in market fragmentation. That would leave countries with energy supply constraints facing much higher energy prices than even scenario 1, and deeper economic contractions.

Good policies mean the opposite. The best case would be a grand energy bargain in which all EU countries work to reduce demand by incentivising both industrial and household gas users to reduce consumption and by minimising gas use in power generation, while increasing supply from new sources, keeping cross-border flows open, and engaging as a bloc with friendly suppliers including Norway and the United States.

When we estimated the empirical relationship between energy prices and consumer prices for 2000-2022 (see the Annex), we found that if energy producer prices increase by 1% over 12 months, household energy prices also go up by 0.4% and household non-energy prices by 0.04%, on average in the euro area (though there are significant differences between euro-area countries). By combining these two estimates (and also taking into account the likely increase in the weight of energy in the consumer-price inflation index as a result of higher energy prices), we estimated the total impact of a 1% increase in energy producer prices on total consumer prices at 0.08% over 12 months.

Assuming that the ECB’s forecast of 5.5% inflation in 2023 corresponds to our scenario 3, in which energy prices stay roughly unchanged from September, estimates can be made for 2023 inflation under each scenario. Scenario 1 would result in markedly higher consumer price inflation of 7.4% – very close to the 7.6% adverse inflation scenario in the OECD’s September 2022 Economic Outlook. In scenario 2, 2023 inflation would be 6.6%, while in scenarios 4 and 5 it would be 4.7% and 3.9% respectively. Compared to the baseline, the last two scenarios would allow an earlier return to the ECB’s 2% target, require less monetary tightening and hence enable a faster economic recovery.

The extent to which EU countries implement a strong and united policy response to the energy crisis will define the continent’s macroeconomic outlook for 2023. Should EU countries slip into energy nationalism, they will get higher energy prices and thus even higher inflation, higher interest rates and lower economic growth. In contrast, good policies in the form of an EU energy grand bargain would contain the direct impact of the energy crisis on households and firms and would stabilise inflation, reducing the need for further interest rate hikes and allowing an earlier recovery. Though avoiding recession is unlikely, making the right policy decisions will give Europe significant control over its short-term economic destiny.

While data on the 2022 weight of energy used by Eurostat is available (since this was determined on the basis of 2021 consumption data), the data on the relative price of energy in the full year of 2022 will be available only in January 2023. The September 2022 data shows that the relative price of energy in HICP went up by 31 percentage points (measured as the 12-month moving average rate of change), while an extrapolation up to the end of 2022 suggests that the full-year relative energy price increase could be 34 percentage points. This price effect will increase the weight of energy in HICP. Most likely, households will consume less energy in 2022 than in the year before – this quantity effect (by itself) will reduce the weight of energy in HICP. Forecasts for 2022 quantities are not available. 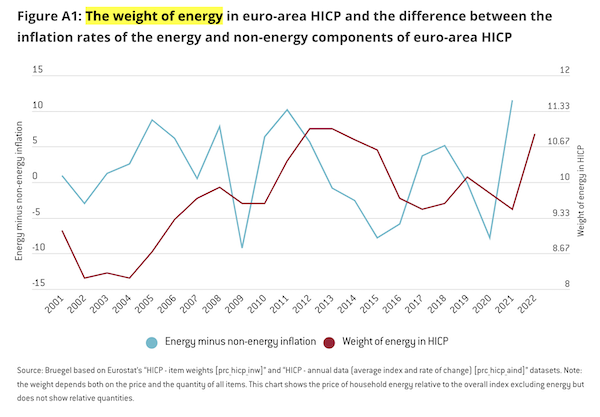 We estimated two vector-autoregressive (VAR) models looking at the pass-through of energy PPI on HICP. The first model identifies the direct effect by looking at the energy component of HICP, and the second model identifies the indirect effect by looking at the non-energy component of HICP. In both models, we controlled for demand, because higher energy prices could reduce spending on non-energy goods and services and thereby reduce inflation. To proxy demand conditions, we used either the unemployment rate or retail sales volume.

As a baseline, we estimated the models on the log-level of prices, the log-level of retail sales volume, and the untransformed unemployment rate. Such a specification results in consistent estimates irrespective of whether there is a cointegration relationship among the variables. We also tried a specification in which we differenced the variables and found that our results were robust.

We estimated the generalised impulse response function developed by Pesaran and Shin (1998), which achieves uncorrelated residuals irrespective of the ordering of the variables, in contrast to the frequently used Cholesky decomposition. Shocks identified by the Pesaran and Shin (1998) methodology can be interpreted as shocks to the variables on the left-hand side of the VAR, but these shocks are not structurally identified in the sense of being derived from a particular theoretical framework. We studied the impacts of a shock on energy PPI. Since an initial energy PPI shock also impacts the future values of energy PPI, while in our scenarios for energy PPI we assumed that energy PPI stabilises at an unchanged value, we calculated the impact of an energy PPI shock on HICP relative to energy PPI over 12 months and used this magnitude to derive scenarios for HICP based on scenarios for energy PPI.

As a baseline, we used the January 2000-August 2022 sample period for estimation. Notably, energy prices have increased much more since 2021 than in the past. The sample period since 2021 is too short to make reliable estimates. The impact of energy PPI on HICP can be non-linear and thus results for the outlying recent period might be different from the preceding longer period when energy prices did not fluctuate that much. Additionally, government interventions in household energy prices could dampen the impact. These caveats should be kept in mind when assessing our results.

Once our scenarios for energy PPI were established, we converted these scenarios to total HICP. To this end, we assumed our scenario 3 is consistent with the ECB’s baseline forecast made in September 2022. The ECB reports quarterly inflation rate projections under its baseline scenario: we assumed that a forecast quarterly inflation rate applies to all three months of the particular quarter. By using these monthly forecast inflation rates, we calculated the level of the monthly HICP index (measured as 2015=100), starting from its September 2022 actual value up to December 2023. We then calculated the annual inflation rate as the average of the forecast monthly price level in 2023 divided by the average monthly price level in 2022.