Yves here. This post mentions that the Big Four grain companies use a “just in time system” without explaining how that operates in practice. But they suggest that it is lacking in structural buffers or other protections like being regionally compartmentalized. The US may be hit with diesel shortages in the coming months, which could impede truck and train deliveries. I hope knowledgeable readers can discuss what if any impact that would have on retail food supply in Europe and the US/

By Pat Mooney, an expert on agricultural development expert, a member of the independent International Panel of Experts on Sustainable Food Systems (IPES-Food) and the co-founder and executive director of the civil society ETC Group. Originally published at openDemocracy

An estimated 345 million people may now be in acute food insecurity, compared with 135 million before the pandemic. Vulnerable populations face destitution in poorer food-importing countries such as Lebanon, Yemen, Sudan and Somalia. Poor consumers in rich countries are struggling to put food on the table.

Supply shocks caused by the COVID-19 pandemic and Russia’s invasion of Ukraine have been the spark for this inferno of hunger. But the kindling for the fire was already stoked: the severe, underlying weaknesses in our food system.

These include many countries’ heavy reliance on food imports, entrenched production systems, financial speculation, and cycles of poverty and debt. Dysfunctional grain markets and the record bonanza enjoyed by grain traders are symptoms of these flaws.

For decades, four companies dominated the global grain trade and at least 70% of the market. They are collectively known as ABCD (Archer-Daniels-Midland Company, Bunge, Cargill and Louis Dreyfus). China’s state-owned COFCO and a couple of other contenders in Asia are now joining the ABCD to share in booming profits. Cargill reported a 23% increase in revenues to a record $165bn by mid-2022. And during the second quarter of the year, Archer-Daniels-Midland had its highest profits ever.

As food prices skyrocket and hunger rises, and with the prospect of still more supply shortages, such profiteering is clearly unjust and a sign of abject market failure. The price spikes have happened despite abundant public and private reserves of grain. There is no correlation between the grain traders’ outsize profits and what they are delivering in terms of food security or sustainability. The ABCD have failed to meet their basic functions of ensuring food gets to the people who need it, and does so at a stable price. 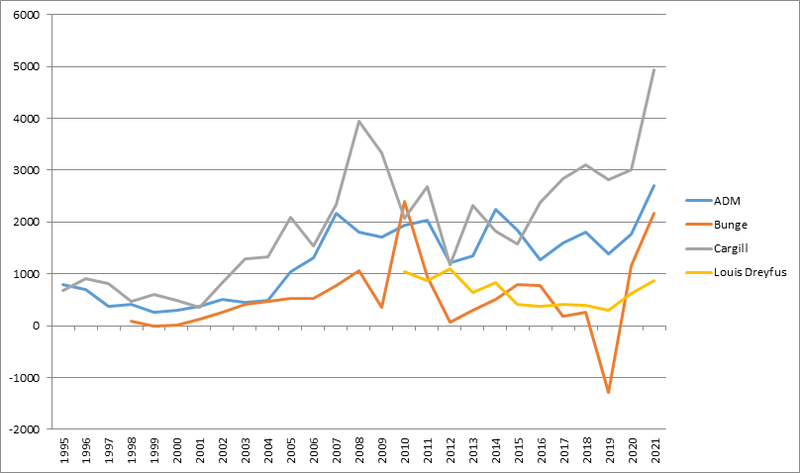 There is a lack of transparency about the ABCDs’ grain stocks. There is also no way to ensure they are released in a timely way. Instead, the grain giants have an incentive to hold stocks back in the hope of higher prices.

But while these companies are posting high profits, others are feeling the effects of the food system they helped design. The globalised, just-in-time food distribution system can quickly be disrupted at a single point. The system is highly specialised, linear and designed to optimise high-volume flows, on the assumption that conditions will be stable. It is efficient for the ABCD to handle just a handful of crops – standardised varieties from specialised production regions that travel along centralised shipping routes. But when the system suffers a shock, it can be shattering. The true test of any system is how it performs under stress and in unexpected conditions. When it comes to securing the world’s food chains, resilience is fundamental – all the more so in a world faced with increasingly extreme weather.

The level of monopoly in the grain markets is also contributing to their failure. The global grain markets are more concentrated than the energy sector and even less transparent. The grain giants wield such influence over markets and government policy development, there are no incentives to change or divest their power. This is a characteristic shared with many other parts of the ‘agrifood’ chain, from seed and agrochemical monopolies to farm machinery and meat production, as documented in a new ETC Group report. And all of them are substantially owned by the same set of asset management firms: State Street, Vanguard and Blackrock.

What Is To Be Done?

More transparency over grain markets is key. The case has never been stronger for the UN’s agricultural markets information system (AMIS) to incorporate food stocks and trading data from large cereal traders, to reduce speculation and the risk of economic bubbles.

The just-in-time model also needs to be overhauled. Food systems should have spare capacity as a buffer against disruption of production or trade. Toyota pioneered just-in-time manufacturing in the 1960s and it was to be imitated by every other industry. But unlike its rival carmakers, Toyota always made sure its supply chain was diversified and manufacturing hubs localised. Thus, it made itself more shock-proof. For food systems, this would mean back-up networks of regional grain reserves jointly controlled by different governments, and regionalised networks of more diverse foods, crop varieties, seeds, trade routes, companies and producers. Climate change gives added urgency to the task of spreading the risk by prioritising diversity of crops, producers and supply routes.

Ultimately, the ABCDs of this world are the wrong guys to get us out of the multiple crises faced by the food system. The world’s indigenous and small-scale producers have domesticated over 7,000 crops. That’s 6,988 more than are regularly traded by the ABCD. Their crops and non-globalised food webs are the true diversity and resilience we need to supplant our insecure dependency on the ABCD.