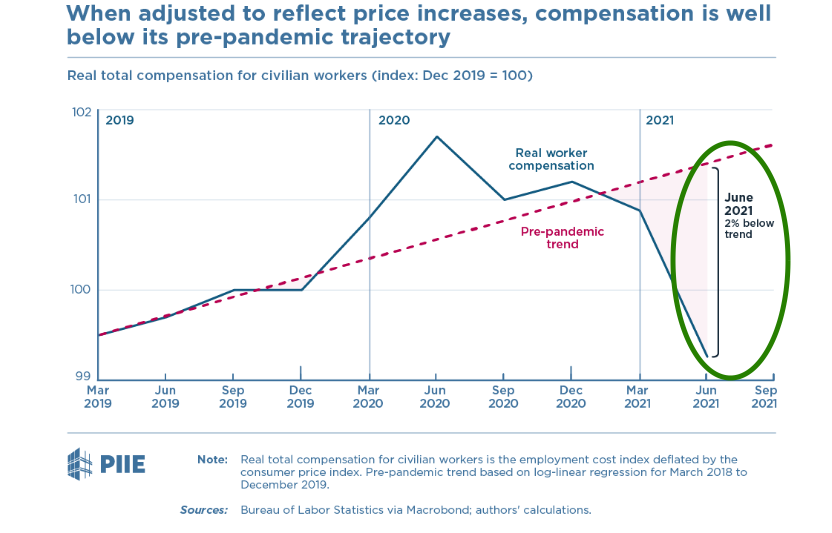 “I can always choose, but I ought to know that if I do not choose, I am still choosing. … Man is condemned to be free.”
― Jean-Paul Sartre, Existentialism and Human Emotions

“The beatings will stop when billionaires are rich enough.”
—Yours truly

The Corporate War on Wages

As we emerge from the Covid crisis, the whole U.S. economy, it seems, is determined to destroy wage growth (or more properly, “wage recovery”). Covid crisis stressed many industries — for example, the airlines, causing the government to find ways to give them money.

Yet as soon as companies received this largess, they found other uses for it, uses that don’t involve paying employees:

American Airlines received almost $7 billion in PPP loans, their CEO made almost $11 million, yet they still laid off 30,000 of their employees during the pandemic.

Can you guess why most of those 30,000 people don’t want to get their old jobs at American Airlines back? https://t.co/HvvENLfbmU

CEOs did find ways to enrich themselves, however. From the Guardian:

Few industries were hit as hard as airlines when the coronavirus pandemic hit the US last year. To stop what looked like the imminent collapse of a major employer, the government stepped in with $15bn in support.

“We thank Congress and the administration for quickly passing legislation to protect the paychecks of tens of thousands of United Airlinesemployees,” said Frank Benenati, the United Airlines spokesperson.

A year on, the $5bn United Airlines received from the $2.2tn Coronavirus Aid, Relief, and Economic Security Act (Cares Act) has helped the airline hand back billions to shareholders and millions to executives. But for 2,500 United catering workers who struggled through the pandemic, it’s a different story. The company is now weighing plans to outsource their jobs to a contractor. [emphasis added]

The Guardian article makes it clear that the outsourcing is a result of pro-union efforts by catering workers.

When it came time to hire workers back, most companies balked, attributing their under-staffing to “no workers available,” when in fact the real cause was, “We refuse to increase wages, customers be damned.”

Eventually even the Fed joined the “War on Wages” bandwagon:

The chairman of the U.S. Federal Reserve, Jerome Powell, said his goal is “to get wages down.” …

According to a transcript of the presser published by the Wall Street Journal, Powell blamed this inflation crisis, which is global, not on the proxy war in Ukraine and Western sanctions on Russia, but rather on U.S. workers supposedly making too much money.

“Employers are having difficulties filling job openings, and wages are rising at the fastest pace in many years,” Powell complained.

The Fed could have added supply chain issues to the reasons for inflation. But they didn’t. You don’t need to think very hard to understand why.

The War on Wages has expressed itself in a wonderful variety of ways, including retroactively reducing an employee’s total compensation after she quits. The tool to do that — charge her, as she walks out the door, for the training she received they day they welcomed her in:

WASHINGTON, Oct 17 (Reuters) – When a Washington state beauty salon charged Simran Bal $1,900 for training after she quit, she was shocked.

Not only was Bal a licensed esthetician with no need for instruction, she argued that the trainings were specific to the shop and low quality.

Bal’s story mirrors that of dozens of people and advocates in healthcare, trucking, retail and other industries who complained recently to U.S. regulators that some companies charge employees who quit large sums of money for training.

Nearly 10% of American workers surveyed in 2020 were covered by a training repayment agreement, said the Cornell Survey Research Institute.

Training Repayment Agreement Provisions are appropriately called TRAPs, because they are.

All of which leads to a larger observation. We live among predators, lions and tigers and bears, each determined to eat what they can of us before another predator takes a bite first. 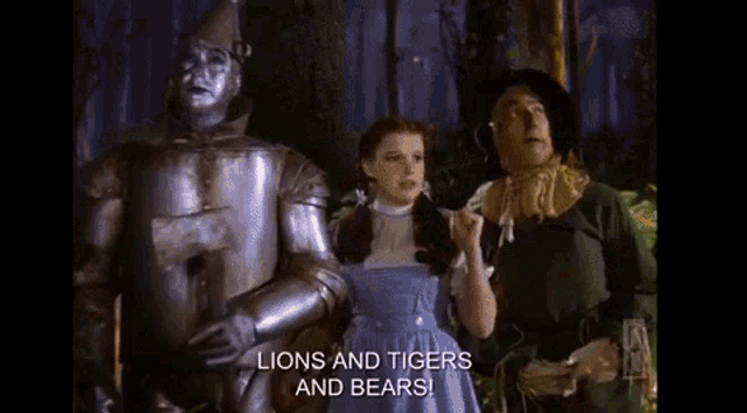 Our monetary flesh is rendered off our bones, inch by inch, by those who surround us. Unlike our ancient ancestors, however, whose predators were beasts, our present predators are fellow human beings, creatures identical to ourselves in all but intent.

Which means our use of the term “predator” is off by a lot. An animal that preys on humans is a predator. But a human who preys on humans is more than that. He’s also a psychopath. And we have permitted our society to structure itself so that our most successful psychopaths, our apex predators … are also our rulers.

No wonder ours is a pre-revolutionary nation. And given that, it’s bad for us all that Democratic Party, for the most venal of reasons, vehemently opposes revolutionary leaders who hail from the left of the Right:

[I]n 2020 [the Democratic Party] saw its biggest priority not as beating the man they cynically pretended they thought was a fascist, but as stopping Bernie Sanders. Democratic elites were not just ideologically hostile to the Sanders project, but materially threatened by it. After all, they could live and even thrive under another four years of Trump; the previous four years was proof of that. But if Sanders actually managed to take over the party, it was an open question how long it would be before the corporate largesse ran dry. [emphasis added]

As it stands, we have no good choices. Just degrees of bad ones. 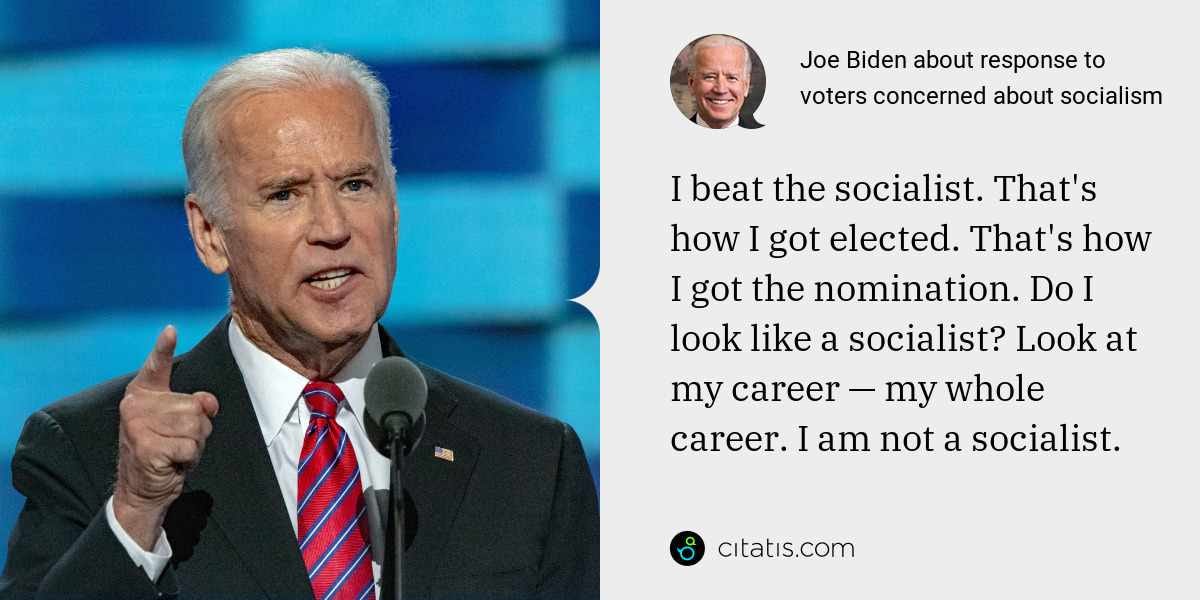 All of the revolutionary energy in the country — which could be called “anti-predator defense” by an impartial observer — is being channeled by both political parties toward right-wing demagogues, who will certainly do us harm, will destroy rather than heal.

A Future No One Wants

It’s a sorry situation. And it’s not a stable one, as Chris Hedges observes:

The reconfiguration of society under neoliberalism to exclusively benefit the billionaire class, the slashing and privatization of public services, including schools, hospitals and utilities, along with deindustrialization, the profligate pouring of state funds and resources into the war industry, at the expense of the nation’s infrastructure and social services, and the building of the world’s largest prison system and militarization of police, have predictable results.

We’re watching those “predictable results” right now, and nothing on offer will mitigate them.

The beatings will stop when billionaires are rich enough, and not before. In other words, never, unless the our billionaire-serving rulers are replaced.

Seems impossible? Not so. Not for an existentialist. Even in the face of a gun aimed at our head, there’s always a choice.