Yves here. I’ve taken the liberty of changing the title of this Kaiser Health New from A Family Death During the Holidays Prompts Questions and Reflection. The piece pulls its punches, perhaps because the health care journalist author Judith Graham, who regularly writes about aging, is hesitant to come off as an advocate and/or potentially alienate future sources. But you can see she is clearly not happy with the caliber of care her father-in-law received in his final days.

I’ve heard similar stories from readers and I saw it first hand with my mother, who like Graham’s father died at 94. I would be curious if practices are better or worse with the moderately and very old in other countries, particularly in Asia. The two times my mother was hospitalized in her final year, the care was horrid. And it wasn’t as if the staff was overburdened due to Covid. My mother’s aides would call for help, and after >10 minutes of getting no answer, would then go to the nurses’ station to find them doing their nails and watching TV. They also failed to keep her well hydrated and bruised her horribly.

Similarly, when she went to the hospital on Christmas Eve, it was not crowded since surgeries are not scheduled for that week. Despite a Covid surge, hardly anyone on staff was wearing masks. I nearly lost it when an MD pulled his surgical mask below his chin to talk to my mother. It took over 20 minutes of hounding staff to get her some water (there were no cups in her room, otherwise I would have handled it).

They couldn’t even be bothered to diagnose her properly. After conferring with IM Doc, it was very clear she had a pulmonary embolism, so her prospects were not good. But I was hoping to get her back home to see a fire and have a nice dinner. Instead, the MDs, against evidence (very sudden crash in blood oxygen, clear lungs on an Xray and no congested sound to her breathing) maintained she had pneumonia. They insisted on subjecting her to a second chest Xray, on what IM Doc said is a bogus theory, that somehow her lung tissue would fluff up and the pneumonia would become visible. That second Xray killed her. All the handling and exertion debilitated her. She died within 2 hours of coming back to her room.

But more broadly, an anti-aged attitude was evident. No one seemed willing to work that hard to save an old woman, or even help her have a more dignified death, particularly since she didn’t look that swell. Thanks to Covid, her hair and nails hadn’t been done for over a year and she came to the hospital in flannel pajamas. Notice the photos of the father in law below. Despite the upscale sweater, watch and glass frames, I suspect his very aged skin was held against him.

BTW, according to the Social Security life expectancy table, an average women my mother’s age typically would have lived another 3.8 years. So to hell with the bigots on staff.

And this sorry picture is set to get worse with Covid, with repeat infections reducing health baselines generally and resulting in more demands on doctors, nurses and hospitals that have no ability to increase capacity in less than many years. A sicker population will also produce more prejudice against older patients, even if they are robust and have managed to stay Covid-free.

By Judith Graham, a contributing columnist who writes the “Navigating Aging” column for Kaiser Health News. Prior to that, she was an investigative reporter, national correspondent and senior health reporter at the Chicago Tribune and a regular contributor to The New York Times’ New Old Age blog. Originally published at Kaiser Health News 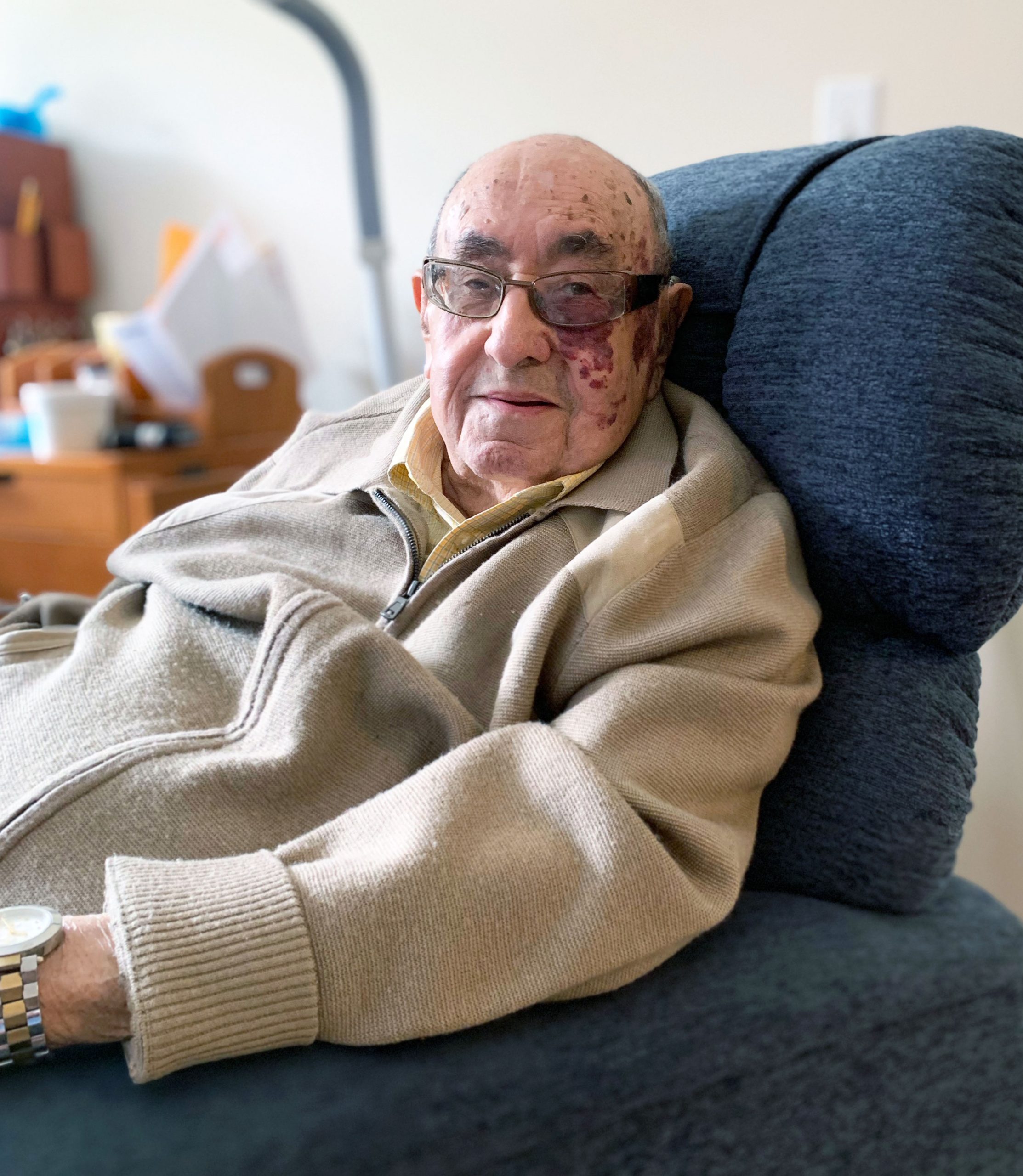 Melvin Zax was a distinguished psychologist who worked until age 90, even as end-stage kidney disease sapped his strength. His death a few days before Thanksgiving left his family grieving but resolved to celebrate life, as he did, in the new year. (Jacob Zax)

It wasn’t the Thanksgiving holiday any of us had expected.

Two weeks before, my 94-year-old father-in-law, Melvin Zax, suffered a stroke after receiving dialysis and was rushed to a hospital near his residence in western New York.

There, he underwent a series of tests over the course of several days. With each test, Mel became more agitated. His hearing aids weren’t working right, and he didn’t understand what was happening.

Amid the hubbub of a busy hospital, Mel wasn’t sleeping at night. He became delirious, a frightening and all-too-common experience for older adults who are hospitalized.

For two days, Mel was housed in the emergency department; the hospital had no regular rooms available. Similar scenarios are playing out across the country, as hospitals stagger under a surge in respiratory illnesses and covid-19-fueled cases alongside acute staffing shortages. Older Americans are at particular risk: About 1 in 5 emergency department visits are made by people 60 and older.

An ongoing crisis in long-term care options has contributed to the bottleneck. Some seniors are occupying hospital rooms longer than necessary because there’s no place else for them to go. Many nursing homes and home care agencies aren’t accepting new patients because they simply don’t have enough workers.

Staffing issues at my father-in-law’s hospital were apparent. My husband, who was at a conference in Montreal when his dad was first hospitalized, called repeatedly but couldn’t get through to a nurse or a doctor for hours. As far as we knew, Mel’s stroke was tended to promptly, but the lack of clear communication left us with lingering doubts. How often did nurses check on him in the subsequent hours and days? How were decisions about testing made, and what consideration was given to Mel’s advanced age?

Mel was a distinguished psychologist who’d worked part time until age 90 and remained mentally sharp. But he’d had diabetes for decades and since September 2020 had been getting dialysis three times a week, a grueling therapy for kidney failure. “I’m a wreck,” he would tell my husband over the phone after returning from a session.

I’d written about dialysis for the elderly, and I knew the statistics: Patients 85 and older live, on average, two years after beginning treatment. Mel had already beaten the odds by surviving 26 months. Did the hospital staff realize how frail he was and adjust their treatment and testing regimens accordingly?

“Ask for a geriatrician consultation,” I advised my husband, who has legal and medical power of attorney for his father and was now at his side.

I worried that nothing being done at the hospital — electrocardiograms, CT scans, an attempted MRI scan (Mel couldn’t tolerate that), an order to wear a heart monitor — would change Mel’s prospects. And he was increasingly agitated, groaning and throwing his arms out in seeming distress.

Some of what hospital doctors suggested simply didn’t make sense. Mel had been taken off statins for high cholesterol in the past year; a hospital physician put him back on the medication, citing the risk of another stroke. Was there any chance it would really make a difference? (Statin therapy is not recommended for people near the end of life.)

Six days after his stroke, Mel was discharged to the nursing home where he’d been living for four months following a previous hospitalization. It’s part of a well-run senior living complex with a top-notch geriatrician who oversees medical care.

That geriatrician was the first to acknowledge that Mel might be dying. Gently, he told my husband that Mel had been depleted by all the interventions he’d received in the hospital and recommended that dialysis be stopped. Compassionately, he explained that Mel would probably pass within a week or two of ending the therapy.

Mel was barely conscious and unable to express what he wanted at this critical juncture. But my husband knew the ferocity of his father’s desire to live. “Let’s try one more session of dialysis and see what happens,” he told the doctor.

It didn’t work: Mel’s circulatory system was too compromised for dialysis to proceed. Over the next few days, Mel’s six grandchildren and three sons and their wives traveled to be at his side.

My husband realized it was time to arrange hospice care, and a social worker met with us to describe what that would entail. An aide would visit Mel several times a week, she explained, but that would take a few days to set up because of staffing issues. Meanwhile, a nurse would visit in the following days and we could call the hospice 24/7 for help.

As it turned out, an aide never arrived, but access to the hospice’s medical staff proved essential. As he lay in bed, Mel’s breathing became ragged and his chest heaved. With our encouragement, a nurse at the home called hospice, and orders were given to administer morphine every hour.

The next day, Mel seemed peaceful but more distant. There was a quiet in the room that hadn’t been there the day before. The hospice nurse arrived and observed that Mel’s breathing was halting for several seconds. Watch for these pauses and their lengthening, she told us. A few hours later, four of us sat at Mel’s side as his breathing slowed and then stopped.

That was four days before Thanksgiving.

How does one go on with a holiday under these circumstances? On the one hand, the entire family was together for the first time in many years. And there was lots to do: host a funeral, arrange for the weeklong Jewish mourning period, and prepare food for various occasions. Including Thanksgiving.

On the other hand, there was little time to think about what we’d just witnessed or process our emotions.

That’s what we’re doing now, as Christmas decorations go up in our neighborhoods and holiday songs fill the airwaves. Remembering Mel. Feeling sad. Noticing the shadow of death just behind us. And resolving to live well in the new year, knowing this is what Mel would want.