Yves here. Today we turn to an important element of the nature v. nurture question, that of education, and how that plays into inequality.

A cross-post yesterday on the promotion of “race science” provided a revealing set of comments, not necessarily in a good way. I should have posted this section from an article in Sapiens as a prophylactic:

A friend of mine with Central American, Southern European, and West African ancestry is lactose intolerant. Drinking milk products upsets her stomach, and so she avoids them. About a decade ago, because of her low dairy intake, she feared that she might not be getting enough calcium, so she asked her doctor for a bone density test. He responded that she didn’t need one because “blacks do not get osteoporosis.”

My friend is not alone. The view that black people don’t need a bone density test is a longstanding and common myth. A 2006 study in North Carolina found that out of 531 African American and Euro-American women screened for bone mineral density, only 15 percent were African American women—despite the fact that African American women made up almost half of that clinical population. A health fair in Albany, New York, in 2000, turned into a ruckus when black women were refused free osteoporosis screening. The situation hasn’t changed much in more recent years.

Meanwhile, FRAX, a widely used calculator that estimates one’s risk of osteoporotic fractures, is based on bone density combined with age, sex, and, yes, “race.” Race, even though it is never defined or demarcated, is baked into the fracture risk algorithms.

Let’s break down the problem.

First, presumably based on appearances, doctors placed my friend and others into a socially defined race box called “black,” which is a tenuous way to classify anyone.

Race is a highly flexible way in which societies lump people into groups based on appearance that is assumed to be indicative of deeper biological or cultural connections. As a cultural category, the definitions and descriptions of races vary. “Color” lines based on skin tone can shift, which makes sense, but the categories are problematic for making any sort of scientific pronouncements.

Second, these medical professionals assumed that there was a firm genetic basis behind this racial classification, which there isn’t.

Third, they assumed that this purported racially defined genetic difference would protect these women from osteoporosis and fractures.

Some studies suggest that African American women—meaning women whose ancestry ties back to Africa—may indeed reach greater bone density than other women, which could be protective against osteoporosis. But that does not mean “being black”—that is, possessing an outward appearance that is socially defined as “black”—prevents someone from getting osteoporosis or bone fractures. Indeed, this same research also reports that African American women are more likely to die after a hip fracture. The link between osteoporosis risk and certain racial populations may be due to lived differences such as nutrition and activity levels, both of which affect bone density.

But more important: Geographic ancestry is not the same thing as race. African ancestry, for instance, does not tidily map onto being “black” (or vice versa). In fact, a 2016 study found wide variation in osteoporosis risk among women living in different regions within Africa. Their genetic risks have nothing to do with their socially defined race.

When medical professionals or researchers look for a genetic correlate to “race,” they are falling into a trap: They assume that geographic ancestry, which does indeed matter to genetics, can be conflated with race, which does not. Sure, different human populations living in distinct places may statistically have different genetic traits—such as sickle cell trait (discussed below)—but such variation is about local populations (people in a specific region), not race.

This post describes an important aspect of the nature versus nurture question, which is the role of formal education and the advantage the more affluent have in paying for their children to have more and better quality instruction.

In modern economies, people’s livelihoods are based in large part on skills acquired through education. Unequal education therefore drives both inequality in the labour market and low social mobility across generations. This column reviews the evidence on how family background shapes differences in educational outcomes, mechanisms, and the potential role of policy. The implications of educational inequality are pertinent given the COVID-19 pandemic, in which widespread school closures have created new challenges to learning that put children from low-income families at a particular disadvantage.

Educational inequality is vast. Figure 1 compares average scores from the 2015 wave of the OECD’s Programme for International Student Assessment (PISA) by country to the average scores for children from families in the top and bottom quarter of a measure of socioeconomic status. The socioeconomic gap in test scores amounts to almost a standard deviation. Even in the best-performing countries, the scores of students from disadvantaged backgrounds are below the OECD average. 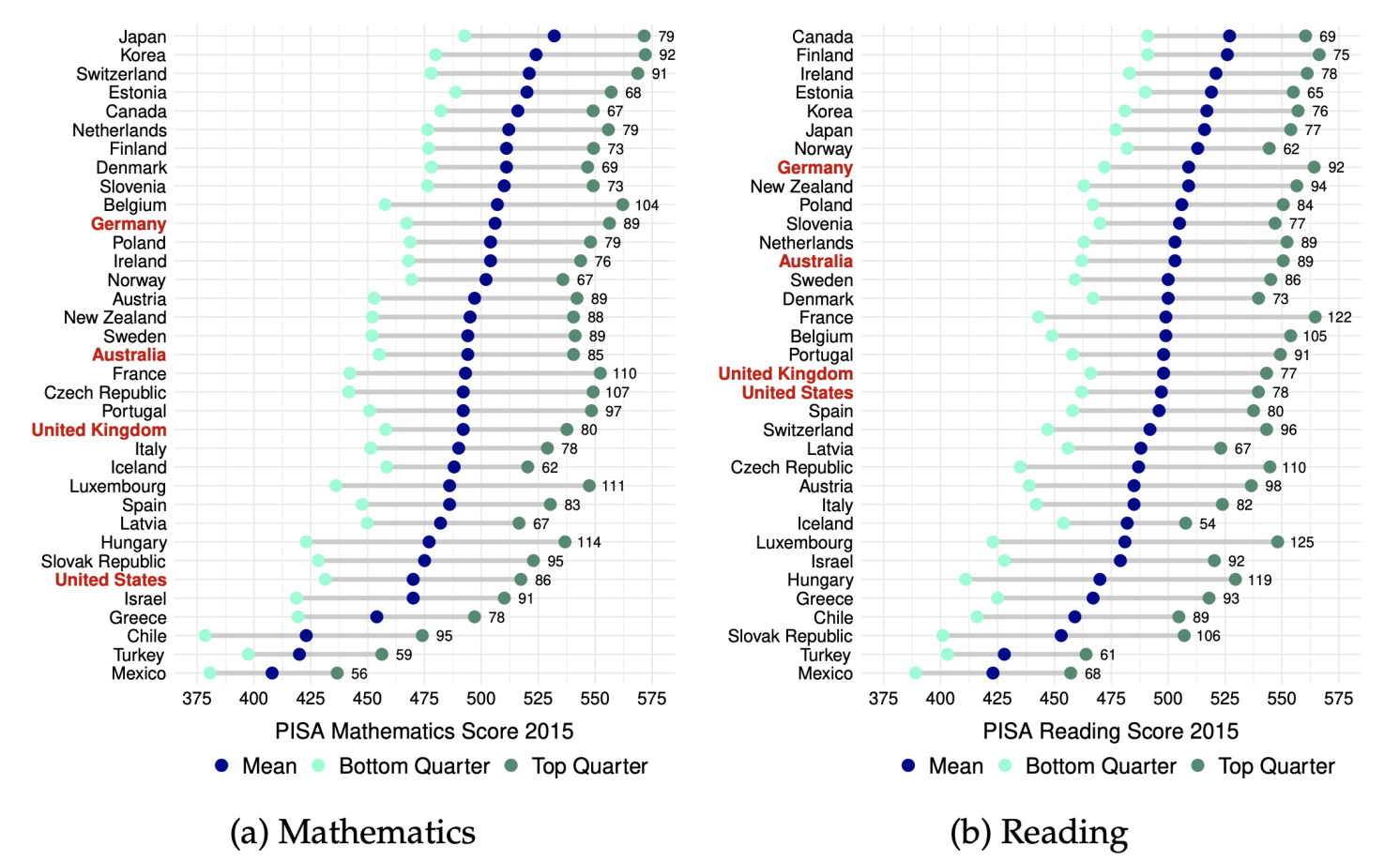 Indeed, the ‘Great Gatsby Curve’ shows that countries with more income inequality also tend to have lower income mobility (Corak 2013, Blanden 2013), and a similar association is observed across regions within country (Chetty et al. 2014, Güell et al. 2018). This pattern is also reason to be concerned about future social mobility. Income inequality has been rising in many countries, and the Great Gatsby Curve suggests that this might result in lower social mobility and in an economically divided society in the future. But how likely is such an outcome of ever-lower social mobility?

Indeed, there is evidence for rising socio-economic gaps in parental investments in recent decades (Doepke and Zilibotti 2019). In the US, upper-middle-class parents have increased their time and money investments in children compared to less fortunate families. However, even though gaps in inputs have risen, the evidence for gaps in outputs is less clear. For example, socioeconomic gaps in tests scores in the US appear to have been broadly stable over the past few decades (Hanushek et al. 2019, 2020).

This tension motivates us to look for evidence of an ‘educational’ Great Gatsby Curve. In a new chapter for the Handbook of Economics of Education(Blanden et al. 2022), we assess whether more unequal countries also display greater educational inequality. In terms of educational attainment (e.g. years of schooling), there is indeed a clear relationship: as shown in the right panel in Figure 2, more unequal countries have lower intergenerational mobility in terms of years of schooling, in both developing and high-income economies. But the relationship between income inequality and test scores is less clear: as shown in the left panel of Figure 2, more inequality is not systematically related to larger socio-economic gaps in test scores. 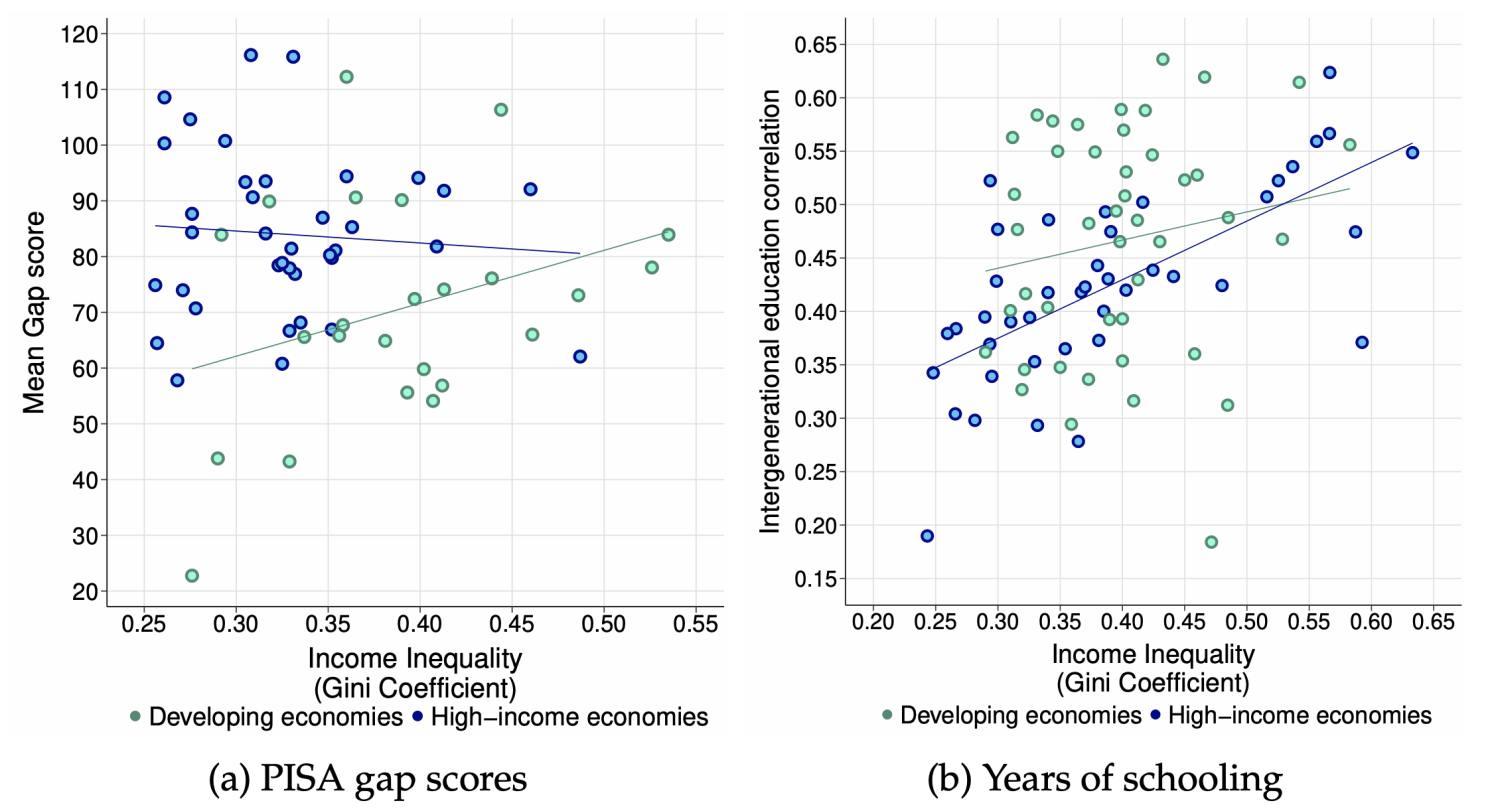 Notes: Scatter plot of the 2012 World Bank Gini (or nearest available year) against the gap in average 2015 PISA scores in reading and mathematics between the top and bottom quarters of socio-economic background (Source: OECD 2016) in Panel (a) and of the intergenerational correlation in parents’ highest and child’s years of schooling (Source: Global Database on Intergenerational Mobility, The World Bank 2018) in Panel (b).

One way to reconcile these trends is that investments of well-off parents run into strongly diminishing returns, while the investments of less fortunate parents are highly productive. Then, rising investment gaps are consistent with stable achievement gaps. But even for given achievement, well-off parents may find other ways to give their children a leg up – and hence, the Great Gatsby Curve in educational attainment. From this point of view, there is indeed reason to be concerned about the future of social mobility, even if the test score gaps remain stable.

Amplifying this concern is that simple summary statistics such as the parent-child correlation in schooling may understate the true persistence of educational advantages from one generation to the next. Years of schooling is only a coarse measure of learning, which abstracts from achievement gaps between students attending the same grade and from horizontal segregation in institutional quality (Chetty et al. 2017) or field of study (Hällsten and Thaning 2018).

Educational Inequality in the Long Run

Indeed, recent studies tracking multiple generations imply that persistence is higher than indicated by conventional parent-child correlations in years of schooling. One way to show this is to note that the outcome of other ancestors remain predictive of child education, even after conditioning on parent education (e.g. Lindahl et al. 2015, Braun and Stuhler 2018, Anderson et al. 2018, Adermon et al. 2021).

That parent-child correlations may understate the role of family background is also consistent with earlier evidence from sibling correlations (Björklund and Salvanes 2011, Björklund and Jäntti 2012) or recent studies of regression to the mean on the surname level (Clark 2014a, 2014b and Barone and Mocetti 2016, 2020).

While educational inequality might therefore be quite persistent, the literature is also clear about the fact that policy matters. None of these patterns and trends are unchangeable laws of nature, but they are contingent on policy choices for early childhood education, schooling and higher education, and family support.

This does not mean, however, that it is straightforward to design simple policies that comprehensively counteract educational inequality. Some of the most obvious policy instruments, such as increasing school funding or instruction hours, appear to have only modest effects (e.g. Jackson and Mackevicius 2021). Other inputs such as teacher quality appear more important, but are also less directly malleable by policy.

Given the role of economic inequality, our chapter also revisits the different ways that financial constraints affect attendance in higher education. One important insight is that student loans cannot fully eliminate the investment gap between children from families with more and less resources.

Educational Inequality in the COVID-19 Pandemic

The final part of our chapter addresses the impacts of the COVID-19 pandemic on educational inequality. Of the world’s student population, 94% was affected by school closures in the spring of 2020 (UNESCO), which often lasted for months and, in some cases, for more than a year. Such school closures are likely to impact children from different socioeconomic backgrounds differentially.

First, the incidence of school closures themselves varied by social background, for instance when public schools close while private schools attended by richer families stay open. Second, children from disadvantaged backgrounds might experience greater learning loss if their school closes, as the ability of parents or peers to compensate is likely to differ across families. In particular, the ability of low-income parents to respond is hampered by the fact they are much less likely to have jobs that can be done from home.

The evidence so far indeed shows that pandemic school closures have increased educational inequality. For example, Engzell et al. (2020, 2021) find that in the Netherlands, eight weeks of online rather than in-person learning led to 0.08 of a standard deviation lower test scores for students aged eight to 11. The impact is 40% larger among those in the least educated homes, suggesting that the pandemic not only increased educational inequality, but that disadvantaged children’s skills actually deteriorated.

Given that the consequences of the pandemic are ongoing, the empirical literature has so far been able to quantify only a subset of the potential channels via which it will affect educational inequality. However, learning is a cumulative process, where learning losses at one life stage may be difficult to compensate for later in life. To examine the potential long-run repercussions of the crisis, recent studies draw on structural modelling that is disciplined by both current and pre-pandemic data (Jang and Yum 2020, Fuchs-Schündeln et al. 2021, and Agostinelli et al. 2022). These studies suggest that unless there is a strong policy response, the pandemic loss of human capital will be reflected in lower lifetime earnings at the individual level, lower national income at the aggregate level, and higher educational inequality for decades to come.