Yves here. While this post is a helpful first pass at a thorny topic, there are a lot more layers to the question of the role of population reduction as part of a consumption reduction strategy. And yes, we do have to reduce consumption of material resources to prevent catastrophic outcomes; that is why yours truly keeps harping on radical conservation.

First, the article oddly skips over the fact that what we really need to do is kill all the squillionaires or at least get them to consume only like (at most) garden variety middle class people. The rich and particularly the super rich are resource hogs. Having the billion poorest people in the world all die off would probably not have a huge impact on climate change.

Second, the assertion that population decline can only be linear is abjectly false. The Mayan civilization disappeared after seven years of drought. The inhabitants of Chaco Canyon died out after a longer period of poor harvests, with cannibalism in the end stages. I would not call the estimate 1/3 fall in the population of Europe over the few years of the Black Death linear either.

Third, the author seems to regard population growth as the natural state of affairs. In fact, globally it was pretty static until the Industrial Revolution. Sanitation and indoor plumbing, with the resulting reduction of disease, increased lifespans.

Covid is in the process of starting to shrink the population. An MD reader sent a copy of a lead story from a local paper, which pointed out that in state, for the first time ever, the birth rate was lower than the death rate. His comments:

The article is a very cleaned up version of what we as physicians were all told yesterday.

The freak out time has now officially arrived here. This has NEVER even begun to closely happen in this state. They have reliable numbers back to 1922 – and semi-reliable numbers dating back to the 1860s. Nothing like this has ever happened before. And not even close.

As the states are now compiling their end of year vital statistics numbers, things are beginning to really look ugly. In the article it states that 23 states are having similar numbers for deaths and births. Not exactly how it was presented yesterday – “so far 24 states have reported their numbers – and EVERY SINGLE REPORTED STATE so far is having the same thing – the birth rate is down – and the all cause mortality is very much up.”…

What is concerning to the epidemiologist that was talking to us yesterday is that the actual relative rate in each state of both deaths and births is right about the same number in all reporting states. This would not be expected in any kind of infectious disease problem – or at least it has never happened in history – they tend to have a lot more scatter. No – this is something else – something exogenous.

As I have been telling you all for months – there are significant issues with young women – and with miscarriages – finally, the numbers are coming in to make me realize that I am not losing my marbles. The ICD 10 codes for primary amenorrhea and for mid-trimester abortions are through the roof from historical patterns. Also mentioned was the fact that there is a sudden drop off being noticed by fertility clinics in number and motility of sperm. NONE OF THESE THINGS ARE BEING STEADFASTLY COMPILED ON A FEDERAL LEVEL – so this is at times like the blind leading the blind.

The all cause mortality – estimated about 5-10% have to do with COVID – and that is a stretch – mostly COVID deaths for 2021 an 2022 have been older patients near terminus anyway. No – the ICD codes for pulmonary embolus, acute coronary syndromes, sudden cardiac death, strokes, suicide, drug OD, and various cancers seem to be the cause – and the cancers that are skyrocketing are leukemia, lymphoma, myeloma and solid endocrine and neuroendocrine tumors. There is a clear biphasic curve of these deaths – a lot of older people dying – but there is also a significant rise in the 20-40 year olds as well….It is right about now that we need a functional CDC and functional accurate MMWR that is presenting accurate numbers and not hiding things.

It is going to be very interesting to see the numbers from all the other states that have yet to come in.

We were repeatedly assured this was completely unprecedented and was very concerning. The fact this is happening in multiple other states is also deeply concerning.

Guys, I am getting deeply worried about what I am seeing and hearing. We are beginning to have severe manpower shortage issues in almost every industry. Just getting a plumber is a weeks-long ordeal. And just from my observation, we do not seem to have a lot of people sitting around living on govt handouts as presented in the media.

So the population problem may start taking care of itself…just not the way we wanted.

I wrote here about adding a Quick Hits series to God’s Spies. This is the first in that series.

In this post, I’d like call to your attention a piece by a Twitter friend, a man who goes by “Blackthorn.” According to his bio, he is “an American living in Europe. PhD in social sciences (U. of London). Works in international orgs.”

The essay I’m looking at is this one: “it’s not either/or”. In it, the writer looks at the relationship between global warming as both a technological problem, “humans using a means of energy production that pollutes,” and as a demographic problem, “one of overpopulation.”

This dichotomy informs some thinking about our shared coming disaster, but not most of it. For example, you hardly read these days in IPCC literature about population issues as a driver. As Simon Lewis puts it in The Guardian:

Every government now agrees that the climate crisis is driven by how the world’s wealthy – which includes much of the UK’s population – currently live, consume and invest.

This is a major leap forward compared to previous reports. The last IPCC summary on solutions in 2014 labelled population growth as one of “the most important drivers of increases in CO2 emissions from fossil fuel combustion”. Such dangerous misunderstandings are no longer present in the summary report. Seven years on, these old “blame the poor” arguments increasingly seem like a relic of a previous age.

Some writers contend that the IPCC is worse than negligent in its latest report. The data that shows that population is indeed a global-warming driver is present in the underlying scientific report, but was scrubbed by the IPCC’s controlling politicians from the Summary for Policymakers, the only document anyone really reads. That makes the IPCC complicit in hiding this fact, not just ignorant of it.

Side note: I suspect there are two tripwires in place in talking about population. The first is the hint of eugenics, anything adjacent to the wish that “others should die so we can live better lives.” A ghoulish thought indeed.

The second is, as the writer linked above contends, a desire to censor “anything that might call into question the goodness of continued growth.” Economic growth, presented as “what’s best for us all,” is best understood as “what improves the lives of the already wealthy,” since that’s what growth actually does in the real world. Opposing growth is anathema in a post-modern capitalist world.

What happens if we look at this as an over-population problem rather than an energy-technology or excessive-consumption one? … The metric that can shed light on this issue ­– how much rise in emissions owes to development vs. to population swelling – is carbon emissions per capita.  A rise in this indicates what you could call intensification of carbon emissions; a steady per-capita rate, in which the absolute increase in emissions tracks population growth, would indicate that emissions growth is population-driven. [emphasis added]

As to solutions, we clearly need to do both — curb growth and (humanly) decrease population. But in practice, what does that look like? If we could do both, what combination of changes achieves the desired effect?

The answer isn’t obvious, especially since population decline, even at an accelerated pace, has a considerable lag time. In addition, as Blackthorn points out, while population explosion is exponential, decline can only be linear. Multiple births beget multiple births. Multiple deaths beget nothing.

For me, the most interesting section is where he starts to tease out what exactly would a decline in birth accomplish from a climate standpoint?

For that discussion, start reading with this paragraph:

Let’s jump to possible solutions.  Speed is of the essence, because deadly climate breakdown is happening already.  How rapidly could we pivot to reducing carbon emissions, and start to re-absorb atmospheric carbon, with simple population easing as opposed to a switch to non-polluting energy or mass conversion to leaner lifestyles?  Where would a steep level of population easing – an immediate decline in fertility to below replacement level – get us in a few years?

Note especially the charts. The first shows the rate at which we’re projected to eat earth’s resources (our ecological footprint) if nothing changes. 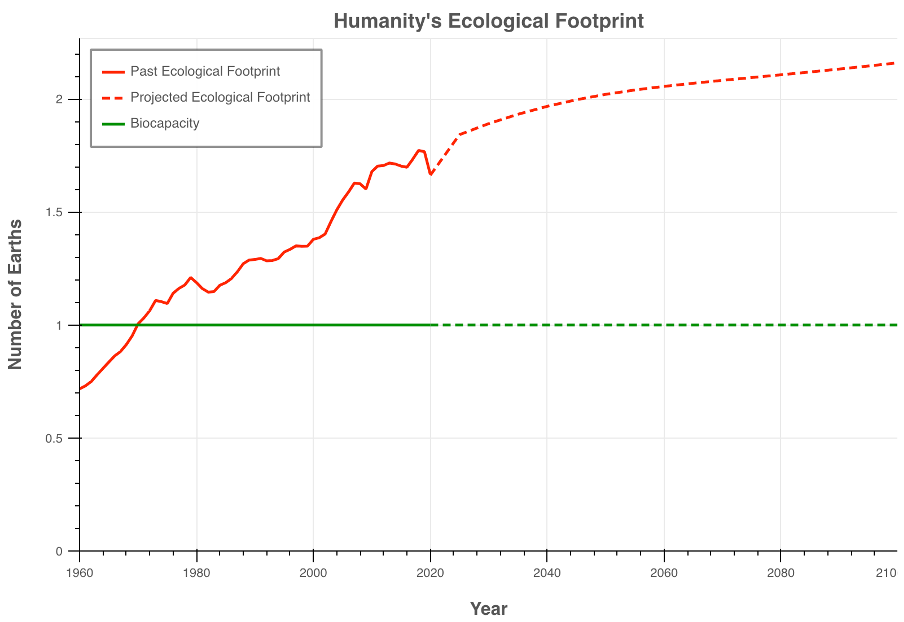 (“Biocapacity” in the chart above is one earth’s-worth of resources.)

His second chart shows the effect on our footprint of 25% reduced consumption alone. The third shows our footprint with just population control via the fertility rate. The fourth combines the two. It’s a fascinating discussion. I hope you find it so as well.

I’ll close with his closing:

[T]he population vs. consumption debate risks settling into opposing camps with ill will and negative stereotypes – self-flagellating ascetics vs. Malthusian misanthropes.  But it’s a false dichotomy.

Like so much else in this post-modern political world, refusing to take one from column A and one from column B — on the assumption that one of those columns contains only evil — will destroy both columns and we who created them.