Because Russia made some big-arrow moves across Ukraine early in the war, and did quickly bring Ukraine to the negotiable, a lot of arm chair generals have become very impatient with the subsequent pace of the conflict. That sense of frustration and anticipation has only increased as Russia has called up and has been training its 300,000 reservists plus volunteers and installed the ferocious-looking General Surovikin as theater commander.

Even though from a map perspective, not much seems to have happened, save Russia giving up Kherson city, later revealed to have been a trap. But Ukraine has burned through most if not all of its initial weapons, despite it having been armed to take on Russia. And Russia has shown it is most assuredly not running out of missiles by methodically wrecking Ukraine’s electrical transmission and destroying military assets like drone conversion facilities, air strips, and even Starlink terminals.

And in a further taking stock, in a New Year’s update of sorts, former Colonel Douglas Macgregor, who maintains inside contacts, estimates total Ukraine casualties at 450,000 and dead at 150,000 (at 2:00):

Even with that level of carnage, Ukraine is still punching, even though, as Macgregor points out, there is evidence that Ukraine is getting desperate for men: pressing young teenagers into service and relying more and more on foreign “volunteers”.

Yet there is still pent-up anticipation that Russia will launch a big or at least biggish offensive once it has its recently mobilized troops in place and the ground freezes. That, again per Macgregor as well as Moon of Alabama, is in about two weeks.

Yours truly has no idea what will happen but I think the eagerness to see a decisive and more traditional battle is blinding commentators to other possibilities.

First, recall that Surovikin cautioned Russian citizens to expect a grinding war, and that he was taking that approach to conserve Russian lives.

Surovikin may have focused on human costs, but the fact is that seasoned fighters are vastly more effective than freshly trained recruits. His position is pragmatic: experienced soldiers are a scarce resource and he needs to operate conservatively in light of that. From the very outset, Russia heard the message from the West that it intended to bleed Russia.

Yesterday, Moon of Alabama responded to the idea of a “coming soon” big Russian offensive, by reacting to a scenario presented by Dima at Military Summary on Tuesday, in response to bleating by a Kharkiv about Russian force accumulations nearby. Dima suggested that Russia could trap the many Ukraine soldiers at the line of contact in Donbass by advancing in their rear in an offensiv north from Zaporzhizia and south from Kharvik, or could capture a smaller group by just striking south from Kharkiv.

MoA poured cold water on both schemes by arguing that the lack of rail lines from Kharkiv south along the envisaged line of attack made a big offensive there impractical. He pointed out a second issue: that the late winter freeze meant Russia could count only only eight weeks before the ground started to get soft again. Would there be enough time to achieve meaningful results? I’ll hoist the entire discussion since it is educational:

Dima of the Military Summary Channel discussed yesterday how two big moves, one up from the Mariupol area and one down west of Kharkiv, can cut all railroad lines that connect west Ukraine with the eastern frontline where some 80+% of the Ukrainian army is now deployed.

I agree that the move from the south will happen but I am less sure about the northern branch. 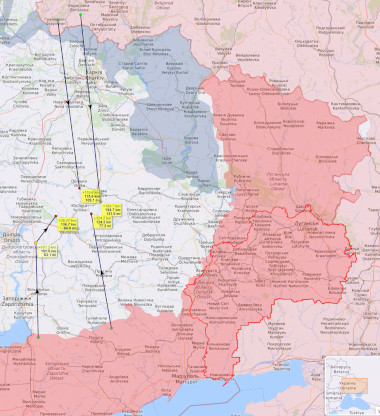 bigger
The Ukrainian army, just like the Russian one, depends on railroads for medium and long range transport. Neither has enough trucks to move the big amount of supplies that are needed to support the war.
Ukrainian railways 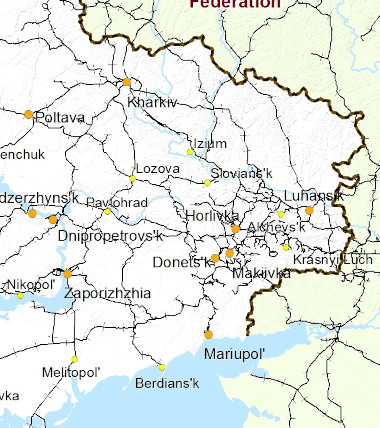 Source – biggerTo be able to supply its forces any Russian move must follow the rail lines and create some safety corridor left and right of them….

Both are big 200 kilometer (120 miles) long moves that require significant amounts of forces. But after its mobilization and with volunteers Russia has 350,000 additional forces it can move in. 75 to 100,000 are sufficient for each push while the rest can keep the Ukrainian troops in the east very busy and fixed in their position.

Then comes the question of when.

Due to currently warmer than normal weather the ground in Ukraine is not yet frozen and the mud will return in March and April. That gives only a two months window to move forward. If I were the Russian commander I would probably wait and use the six dry months during the summer. But there are other criteria, like politics and economics, that will come into play and which may require an earlier move.

I note the lack of interest of timing questions on the Ukraine side. As we are seeing all along the line of contact, Russia and Ukraine can keep fighting at a pretty intense level, and at resulting high cost to Ukraine, during mud season. Can Ukraine realistically sustain that until summer?

It would seem that the further, considerable depletion of Ukraine forces would argue for Russia holding off if it can. The West will also wind up fighting over who will fund the yawning chasm of the Ukraine budget, and Republicans may also get traction in questioning the profligacy of war spending. If the US starts wobbling on “Everything for Ukraine,” that may make it harder to silence opposition voices in Europe.

Remember also that it is essential for Ukraine to keep up the illusion of success to keep funding and weapons flowing. But how long can this show go on?

Given its inability to make real progress on the battlefield, Ukraine will have to gin up more and more stunts like its attention grabbing strikes on the Makiivka barracks and terrorist acts like the serial drone flights to Engels airbase.1 Makiivka was a massive own goal due to serious lapses in discipline, but officials have also taken umbrage at the US role (it’s a certainty that the US helped with targeting and even possibly in launching the attack).2

Zelensky has also pre-committed himself to Do Something by February 24, the anniversary of the start of the Special Military Operation. He has announced he will present a Russian capitulation peace plan then. Recall that Western officials have repeatedly stressed that Ukraine should push for peace only after battlefield wins. That means as with the famed Kherson offensive of last year, Ukraine will be under pressure, optics-wise, to look as if it is advancing somewhere, anywhere, during the winter freeze.

Some Russia experts have worried that Ukraine will try to attack Belgorod, which is only 25 miles from the Ukraine border and has been hit occasionally. If Ukraine forces were to enter Russia proper, it would be a political disaster for Putin and the military leadership.

However, Ukraine is obsessed with Crimea and even people who should know better, like the Institute for the Study of War, apparently keep bringing it up. Zelensky insisted in his Congressional star turn that Ukraine would retake Crimea and the Biden Administration last month said it believed Ukraine had the ability to do so.

Experts who have looked at the terrain, supply lines, Russian manning and fortifications have said it would be suicidal for Ukraine forces to attempt to take Crimea or even cut its land bridge any time soon. But the Kherson offensive last fall was also suicidal, even though the Western press for the most part averted its eyes from the cost and lack of territorial gain. It is more likely that Ukraine will attempt more terrorist-type operations, like its attacks grain-corridor-exploiting drone attacks on Black Sea ship, and the Kerch bridge strike.

A final possibility is that a Ukraine stunt would be aimed at bringing NATO into the conflict. NATO becoming involved in a serious way is Ukraine’s last best hope for rescue.

Fortunately no one fell for the errant Ukraine S-300 missile that fell in Poland during the G-20. However, I am not inclined to see this as an accident. Scott Ritter, who has helped operate similar missile defense system, has said the only way a missile would have gone anywhere, particularly in such an odd direction, is if a radar signal sent it there. In other words, he contends the fire was deliberate, although it could have been executed by rogue members of the Ukraine military, even with assistance of misbehaving Poles.

Given the G-20 timing last time, I would be particularly concerned about action at or near the February 3 date of an EU-Ukraine summit, to be hosted in Kiev. I can’t see how anyone would fall for the idea of a Russian false flag attempt, although some Ukrainian nationalists might be desperate enough to try. If I were Russia, I would try to make it too unattractive to host the meeting there, although even if all the lights were out, I would anticipate Ursula von der Leyen making it a point of pride to meeting in a generator-powered facility. But what about heat in the hotel rooms? Less than the usual glam meals?

This is a long winded way of saying that Russia via its mobilization may have raised expectations that make it extremely difficult not to launch some sort of offensive during what is now anticipated to be a short winter freeze. I do not think the barracks attack will force Russia to change its big plans, but it might have to do some extra whackage, like more grid or military sites hits, to satisfy the public. But Russia will find it hard to ‘splain why it isn’t using all of its new troops soon if it doesn’t.

However, all things being equal, it would be best for Russia to continue its slow bleed out of Ukraine men and NATO weapons until the Ukraine forces were collapsing. One way for Ukraine to continue to play into Russia’s hand would be if it were to attempt an offense when the ground hardens. The more Ukraine keeps breaking its military on Russian lines, the better for Russia.

1 It does appear that Russia was truthful when it said it intercepted the drones and the deaths of airmen resulted from anti-aircraft fallout and not a Ukraine hit. Western arial photographs show no damage to the base or any equipment.

2 I am at a loss to understand why the US helping Ukraine hit bona fide military targets with HIMARS is worse than the ongoing war crime of aiming HIMARS, which again almost certainly require US help, at residential neighborhoods in Donetsk city.