Due to a Western press blackout, I had been unaware of the ferociousness of the war that Zelensky is conducting against the Ukraine Orthodox Church until reader guurst sent this tweet:

Metropolitan Pavel, the abbot of the Kiev-Pechersk Lavra, said prophetically on December 26: “There is only one thing left: to start killing priests, bishops and believers, and I see that this is coming.”

Apparently prompted by the incident above, Mark Sleboda provides a comprehensive account of this situation in a new post, Zelenskiy’s Pogrom Against the Ukrainian Orthodox Church. I strongly urge you to read it in full (it is particularly well documented) but nevertheless hazard a recap below.

Sleboda depicts the Orthodox Church led by the patriarch in Moscow as being cohesive from the 14th century notably even during the Communist era when it was in some disfavor but not disallowed, through the breakup of the Soviet Union in 1991. After that, political jurisdictions didn’t match up with the map of the patriarch’s authority, but the squabbles weren’t unmanageable.

That changed with the 2014 Maidan coup. Even though the Ukrainian Orthodox Church suspended its ties with the patriarch in Moscow as of February 2014, denounced Patriarch’ Krill’s backing of the Special Military Operation, and planned a procession to support the Azov goons Ukraine forces besieged in the Azovstal steel works in Mariupol.

Nevertheless, these efforts to show loyalty to the regime were not sufficient, since the objective was deRussification. From Sleboda:

A decision was made following the US-backed Maidan Putsch in 2014 that in order to permanently geopolitically divide Ukraine from Russia that the cultural and religious bonds uniting the two peoples must be severed as well.
The creation of a new “Orthodox Church of Ukraine” (OCU) with a new Patriarch in Kiev was pushed by the Kiev Putsch regime and manufactured into being in 2018. 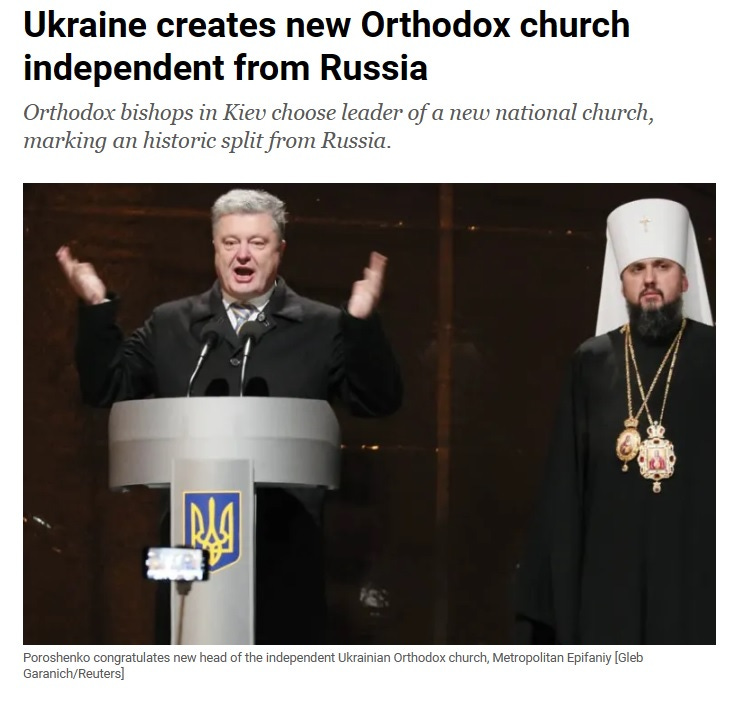 The Kiev Patriarch Filaret even gave CIA ops chief, Jack Devine, an award for his support in the creation of the new ecclesiastically- independent Ukrainian Orthodox church. Incidentally he gave an award to US neocon John McCain as well. That should tell you everything you need to know.

Since seizing power 2014 and accelerating dramatically in the last year, the US-backed Putsch regime in Kiev has been carrying out a very real pogrom against the Orthodox churches and parishioners across Ukraine who do not accept the rule and strictures of its new ly manufactured Orthodox Church of Ukraine (OCU)…

The Kiev Putsch regime’s intelligence services, the SBU have also launched inquisition-like raids at monasteries and churches across the country under the guise of “counter-intelligence measures” to hunt for and root out “collaborators” and “traitors of the Ukrainian people”, searching for such damning evidence as prayer books or religious literature still in the Russian language or icons of Russian saints that prove they are acting as subversive “cells of the Russian world”.

Mind you, it isn’t as if governments haven’t more than occasionally oppressed particular religions, although generally speaking, that has occurred to suppress, ostracize, or even better yet, force into exile the ethnic group practicing that religion.1 Here, the Ukraine government is clear that its assault against the Ukraine Orthodox Church is a manifestation of its program to root out All Things Russian.

The Western press is misleading citizens by hiding the true face of our falsely sanctified ally in Kiev, who has shut down opposition press, opposition parties, and jailed opposition leaders. Or perhaps this is the kind of democracy that is coming to America, witness the spread of tech-enforced censorship via banning and shadow banning, demonetizing, and search downranking.

In particular, our media ignores Nazi brutality and Ukraine’s continued enthusiasm for it. In case you think I am exaggerating:

Really? With so many real heroes fighting to repel an invasion, and with so many allies keen to help (especially Poland), Ukraine’s parliament chose instead to tweet a New Year’s Day birthday tribute to Stepan Bandera, whose men slaughtered thousands of Poles in WW2 massacres. pic.twitter.com/iOb4H17h6y

A bashful slap on Ukrainian regime's wrist from Poland. Even after Zaluzhny provocatively photographed himself with Bandera portrait on Bandera's birthday anniversary & Ukrainian parliament re-tweeted it. https://t.co/Z3O2uqg9ip pic.twitter.com/90QbRGiAwU

It requires getting the neo-Nazi Svoboda types out of schools and politics – Poland has much work to do.

This is the mayor of Lviv and what look like the Hitler Youth in front of Stepan Bandera's monument in Lviv. Honoring the Nazi mass murderer's birthday 😵‍💫 pic.twitter.com/7n1VrM5dCt

Incredible! The fake #Ukrainian nationalist "#church"the head of which just happens to hang out with #USA. officials, is celebrating the Birthday of Stepan #Bandera! The #Nazi who massacred and brutally tortured thousands of people#Poland #Ukraine #USA #NATO #EU #Russia #Latest pic.twitter.com/3wdW821tMH

Needless to say, the specter of violence in a church is upsetting, particularly to those with a strong religious upbringing. From IM Doc:

Unfortunately, the picture of the blood all over the floor of the church brings back such memories for me sitting on my Greek Grandfather’s lap as a 4 or 5 year old kid.

Defiling a church and slitting the priest. What would he have made of this.

I can hear him in his own voice in Greek reading the ancient stories of when someone dared enter the Temple of the Gods and God forbid attack a priest of the Gods.

The Greeks had a very special punishment for this type of person. It was very rarely used for much else other than high treason and defying the Gods.

My grandfather would delight in telling me how the horns of the bull had been fashioned to acoustically amplify the screams of the condemned. And how they would place inflammable material in the bull as the person and the material burned – they had holes in the horns that would begin to blow out the smoke – and eventually it would begin to whistle like a teapot. The entire city was forced to watch.

He was very dramatic. Maybe that is why I did not choose a life of crime.

And from GM, who knows quite a lot about that part of the world and recaps the origin story of Orthodox Church of Ukraine, with a few additional details:

They’re not quite Orthodox though, although many are.

Remember that Galicia split off from Russia 800 years ago. Volynia was recovered after the partition of Poland so it was in Russia for more than century before it was lost again after WWI. It was still Banderized, but still, Galicia is where the real source of all the evil is.

The result of all that time spent inside Catholic Poland and Austro-Hungary was the Uniate Church, which is supposedly Orthodox but is in union with the Pope in Rome:

Which is now the Ukrainian Greek Catholic Church, centered on Galicia.

That’s still only 15% of Ukraine though, the great majority are proper Orthodox.

But then in 2018-19, as part of the preparation for the war, an autocephalous Orthodox Church of Ukraine, separate from the Russian-affiliated UOC (Ukrainian Orthodox Church), was created, with the help of the Patriarch in Constantinople.

Starting a couple months ago, they have been raiding the real UOC churches and replacing the priests with the fake OCU, under the pretext that the UOC priests are agents of Russian influence. And raiding it is — you can assume a lot of the gold and icons there are being sold on the black market.

This is actually backfiring though — there were protests against this even in Ivano-Frankovsk, because apparently people take canonical rules seriously, and they don’t see the OCU as the real church, so once it takes over, they are left without a church. There was even one video of the mother of a dead Ukrainian soldier begging the SBU to wait a couple days so that she can bury him properly, because otherwise it would not be done under the proper right.

Imagine people in Ivano-Frankovsk — as rabid core Banderistan as it gets — protesting against the SBU. But it happened.

But yeah, back to the initial question — yes, Galicians are monsters. And slashing a priest’s throat is nothing compared to what they are capable of. This pales compared to the stories from WWII. Or even some of the things that were done last year.

Problem is “Galicia” now stretches all the way to Kharkov…

Sadly there won’t be a “Truth and Reconciliation” light at the end of this tunnel.

1 One departure was the dechristianization of revolutionary France. Some of this development was bottoms-up, since there was a pent-up hatred against Church officials for their wealth and corruption. But the new regime was also broke. One of its first measures was on October 10, 1789, to seize ecclesiastical property. None other than the then Bishop of Autun, Talleyrand, read the introduction to the motion on Church holdings.