Reader Carl about ten days ago had sent me a link to a Federal Reserve data series “Aggregate Reserves of Depositary Institutions Adjusted for Reserve Requirements.” The series goes back to 1975.

This table is cumbersome to read because it contains over 30 years of data and the headings are only at the very top, so I am providing the headers and the most recent data (as of Jan. 24) for December and January to date. Click on them to enlarge. However, you might find it easier to view them at the source.

I would have made noise about it at the time, but I don’t normally look at this series, and although the lack of apparent reserves looks quite alarming, it appears to be the result of the operation of the Term Action Facility, which allows banks to post collateral with the Fed and borrow funds for a month (the rate is determined via auction, hence the name). Although some readers quibble with my characterization, I view it as a discount window without the stigma (the participants remain anonymous).

There might have been some technical reason for the numbers looking as bad as they did (and still do) so I was (contrary to usual form) reluctant to stick my neck out. However, if you take the data at face value. the implication is that banks are leaning heavily on the Fed, and if this isn’t opportunistic, this would appear to be a very bad sign.

For a frame of reference, just go to the data series and quickly scroll back. There is nothing like this result anywhere in history, not during the Volcker credit crunch, the 1987 crash, the emerging markets and later LTCM crisis, or 9/11. The negative reserves have no historical parallel, nor do the adjusted reserves dropping so close to zero.

Note also there was a very big ratchet down the two weeks before the big fall in the last two weeks. The seasonally adjusted reserves fell to less than a quarter of their former level, and again, the absolute value being that low in unprecedented.

Michael Shedlock (hat tip reader Owen) jumped on this today, via a chart from the St. Louis Fed: 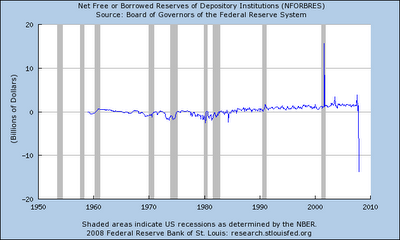 The problem is I am not certain how much of this is due to real stress as opposed to banks taking advantage of a free lunch, since the TAF is giving out one-month loans at 3.123%. at the Jan. 29 auction. That’s less than interbank rates, and you get to post terrible collateral too. Everyone with an operating brain cell should be taking as much of this dough as they can, and they clearly are.

But having now created dependence on unduly cheap money, and getting an unprecedented and (at least to me, Shedlock, and concerned readers) scary chart, how is the Fed going to wean the banks off the TAF? And if we have another credit seize up despite the TAF, one can only expect the Fed will crank up the level of funding on offer.

The non-borrowed reserves dropping in the last two weeks seems inconsistent with the pace of the credit crisis. Recall that the the TED spread, the gap between short-term bank borrowing rates and Treasuries rose sharply and by November had hit levels that were troubling, indicative of banks’ reluctance to lend to each other. An initial joint operation by central bankers did not break the logjam; a big liquidity operation by the ECB, plus the TAF, did.

The factor making the tightness in bank funding markets worse was that liquidity routinely goes way down at year end (banks cut down on trading to tidy up their books). That pattern was kicking in even earlier than usual in an already-tight credit market. So you would have expected to see the negative reserves pattern (if ever) prior to year end, when the funding needs would be acute and the TAF would be a particularly important source of funding. Why are we seeing this change now, in later January?

For those who want to ponder this matter further, Shedlock was also good enough to provide a backgrounder on borrowed reserves from the book Investing Public Funds by Girard Miller:

Another useful indicator of the Federal Reserve’s relative monetary policies can be found weekly in the Federal Reserve data. A key statistic is the net free reserves or net borrowed reserves line item. This statistic measures the degree to which depository institutions have found it necessary to obtain funds in the Fed Funds market and through the Fed discount window in order to obtain required reserves.

During periods of central bank credit-tightening operations, the depository sector might find it necessary to borrow funds to meet reserve requirements. This practice results in net borrowed reserves, which shows as a negative number. Conversely, if ample funds are available through the banking system to meet reserve requirements, banks can become net lenders of reserves through the Fed Funds markets.

Rational agents respond to incentives, and the incentive is to take all the TAF dough you can. But the fact that total reserves also dropped during this period also lends credence to the idea that this dramatic drop in non-borrowed reserves is decidely Not a Good Thing.