I am having a Dean Baker moment, although I suspect Baker will have even more fun with the front page New York Times article bearing the headline above.

This is how the story starts: 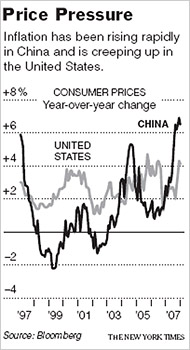 China’s latest export is inflation. After falling for years, prices of Chinese goods sold in the United States have risen for the last eight months.

Soaring energy and raw material costs, a falling dollar and new business rules here are forcing Chinese factories to increase the prices of their exports, according to analysts and Western companies doing business here.

The article also notes, “Some of the current cost pressures are actually by design — Beijing’s design,” and cites measures like elimination of export subsidies and tax rebates, measures sought by the US.

The article fails to mention the single biggest cause of China’s roaring inflation: massive monetary stimulus caused by large, continuing purchases of dollars to fund our current account deficit. In effect, the US has been exporting inflation, and it is finally coming around to haunt us as the dollar depreciates and domestic inflation in our trading partners rises to the point that it shows up in export price increases. But not a word of the role that the funding of our consumption habit plays, at least in the New York Times.