The New York Times has an odd story today, “Is a Lean Economy Turning Mean?” which discusses how conditions for workers have become dire. New jobs are scarce, and many of the ones out there don’t pay as well as what employees got in previous roles. Hello, downward mobility.

What makes the piece peculiar is that the Times seems to have woken up just now to the idea that the labor market has been difficult for the last few years. It’s been common for the media to follow the headline unemployment stats, when those are have considerable shortcomings. The self-employed (who may in practical terms may be severely underemployed) and part-timers are counted among the employed, but the most serious failing in the official unemployment release is the numerator, how unemployment is defined. As Walter Williams at Shadow Stats noted:

I have not gone trolling for an updated estimate of how large the pool of discouraged workers is, but table in the Bureau of Labor Statistics Household Survey, “Alternative measures of labor underutilization” sheds some light (click for larger image),

It shows raw underutilization of 9.9% and seasonally adjusted underutliization of 9/0% as of January 2008. That seems more consistent with the lack of labor bargaining power in the economy: 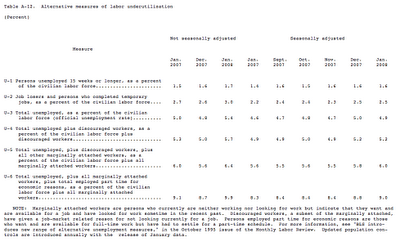 The Times indirectly acknowledges the limitations of the unemployment stats by looking at labor utilization and finding a downtrend there.

But the bigger question is: why hasn’t this gotten more notice sooner? It’s widely acknowledged that inflation adjusted wages have been stagnant since the 1970s. And even in a nominally robust economy like New York City, the white collar cohort not working on Wall Street has been squeezed. Everyone I know in a firm or corporation is doing 50% more than they were expected to do a decade ago, and they certainly aren’t earning 50% more in real terms or even nominal terms. (And the 50% is not an exaggeration: I know quite a few people who are single-handedly doing what was formerly two jobs at their company). Plus we have a culture where many white collar workers are expected to be on call virtually all the time, which both extends the number of hours worked and adds to stress. Yet few have wanted to see these developments as a sign of the falling standing of workers.

From Peter Goodman of the New York Times:

Nicole Flennaugh has a college degree, office experience and the modest expectation that, somewhere in this city on the eastern lip of San Francisco Bay, someone will want to hire her.

But Ms. Flennaugh, 36, a widow, cannot secure steady, decent-paying work to support herself and her two daughter…

“You’re used to making $17 an hour with benefits, and now you have to take any job for $8 an hour,” Ms. Flennaugh says….

“I’ve literally sat and cried, but my friends with double degrees are doing worse,” she says. “It’s the economy. It’s really bad.”

Now, it’s getting tougher — particularly for those at the lower rungs of the economic ladder, and especially for African-Americans like Ms. Flennaugh…..

Many companies, long reluctant to add workers, are hunkered down and waiting for improved prospects, engaged in what Ed McKelvey, a senior economist at Goldman Sachs, calls “a hiring strike.” Americans with jobs are taking cuts to their work hours; those without jobs are staying out of work longer, or accepting positions that pay far less than they earned previously.

Teenagers are struggling to land minimum-wage jobs at fast-food restaurants, because those positions are increasingly being filled by adults. And those with poor credit are finding that this can disqualify them from getting a job…

Indeed, the increasingly anemic job market comes on the heels of six years of economic expansion that delivered robust corporate profits but scant job growth. The last recession, in 2001, was followed by a so-called jobless recovery. As the economy resumed growing, payrolls continued to shrink.

Even as job growth accelerated in 2005 and 2006 before slowing last year, it was not enough to return the country to its previous level. Some 62.8 percent of all Americans age 16 and older were employed at the end of last year, down from the peak of 64.6 percent in early 2000, according to the Labor Department.

“The economy never got its groove back after the tech bubble burst,” says Mark Zandi, chief economist at Moody’s Economy.com. “We’re still feeling fallout from the collapse of the tech economy and the accounting scandals. There are still psychological scars for the managers affected. Managers are less interested in taking risks.”….

Oakland, long known as the blue-collar sibling to the aristocratic San Francisco across the bay, is among the metropolitan areas that never fully recovered from the last recession, with fewer jobs today than in March 2001, according to Economy.com….

Home to about 400,000 people, Oakland is enormously diverse, with blacks making up 36 percent of the population, Hispanics 22 percent and Asian-Americans 15 percent, according to the 2000 census. The city is racked by stubborn poverty, with one-fifth of all households living on less than $15,000 in annual income, according to the census.

Given that picture, Oakland reflects a national trend: The weaker labor market is especially pronounced for African-Americans, and black women in particular, a slide that has halted a quarter-century of steady gains.

In a recent paper, the Center for Economic and Policy Research asserted that a recession in 2008 would be likely to swell the ranks of the unemployed by 3.2 million to 5.8 million, while raising the unemployment rate among black Americans to 11.3 percent to 15.5 percent, compared with 8.3 percent in 2007.

Nationally, the unemployment rate remains at a historically low level of 4.9 percent, though this does not include people who have given up looking for work.

The slide in employment is occurring at a time when jobs are more important than ever for millions of households headed by African-American women, because welfare changes in the 1990s forced many into the job market to compensate for a loss of public assistance.

“The labor market for low-income women is so poor that it’s almost a hoax,” says Randy Albelda, an economist at the University of Massachusetts in Boston.

For more than a decade, Dorothy Thomas, 49, an African-American and a mother of two, worked as an administrative assistant at various health care centers in Northern California. In her last job, she earned $16 an hour, as well as benefits, she said.

It was never enough to pay all the bills, she said, so she made choices, paying this one, not paying that one, all the while focused on one mission: getting her two daughters through school. She lived in apartments in better neighborhoods, paying more rent than she could afford to ensure that her girls attended better schools.

“I truly bought into the idea that education is the way out of poverty,” Ms. Thomas says. One daughter received a master’s degree in education and is a teacher in Hawaii, she says, and the other is still in college.

But the bills for Ms. Thomas are still coming due. She lost her car in November 2005 after she fell behind on the payments. Unable to drive to work, she lost her job. Since then, she has been unable to find a job.

Several times, she has landed interviews that seemed likely to bring offers, but the jobs required a credit check — a test she cannot pass.

“My credit is just so in shambles,” she told a classroom full of people gathered for a credit counseling session at the Private Industry Council. “More and more jobs are checking your credit. They’re saying that credit is a reflection of your character.”

Ms. Thomas deftly toggles between different modes of speech, from street-smart to receptionist-smooth. But getting to work without transportation and buying clothes for interviews without cash are beyond her abilities….

Government data show that the labor market has weakened in recent years for nearly every demographic group…The source of this weakening and what it says about the overall, long-term health of the economy are the subject of fractious debate.

Some economists argue that the labor market has merely settled back to earth after years of ridiculously aggressive investment in technology, which created far more jobs in the 1990s than could be sustained.

“This is a return to normal,” says Robert E. Hall, an economist and senior fellow at the Hoover Institution, a conservative research group at Stanford.

But others conclude that the sluggish job market reflects long-term, systemic forces reshaping the American economy. It represents, they say, the underbelly of the so-called new moderation that has made recessions less frequent and less severe.

Traditionally, the American economy has often expanded in extreme cycles. In periods of growth, companies hire aggressively. When they sense a slowdown, they cut back, laying off workers and curtailing investments, amplifying the ripples of retrenchment. Now, however, companies aim to keep their work forces lean all the time….

In 1994, 30 million people were hired into new and existing private-sector jobs, according to the Labor Department. By 2000, the number of hires had expanded to 34 million. A year later, in the midst of the recession, hiring slackened to 31.6 million, while layoffs winnowed the work force.

In 2003, with the economy again growing, layoffs slowed, but the private sector hired only 29.8 million — a figure that has nudged up only a little in the years since.

Rather than hire and risk having to fire in another downturn, companies added hours for those already on the payroll and relied more on temporary workers, said Mr. McKelvey, the Goldman Sachs economist. Manufacturing companies continued to automate, to squeeze more production out of the same number of workers, while shifting jobs to lower-cost countries like China and Mexico. For lower-skilled workers, that intensifies the competition for the jobs that remain.

Some economists say the weakness of hiring in recent years may protect those with jobs against the usual impact of a recession: Many companies are so lean that the unemployment rate may not increase much.

But the same trend suggests that the impacts of the slowdown are likely to be felt deeply for several years, even after the economy resumes a swift expansion, Mr. Bernstein added.

Before 1990, it took an average of 21 months for the economy to add back the jobs shed during a recession, according to an analysis by the Economic Policy Institute and the National Employment Law Project, a worker advocacy group. Yet in the last two recessions, in 1990 and 2001, it took 31 months and 46 months, respectively, for employment levels to recover fully.

In the recessions of the early 1980s and the early 1990s, the ranks of the so-called long-term unemployed — those out of work for 27 weeks or more — jumped to well above 20 percent of all unemployed people. But in both cases, that share eventually settled back to close to 10 percent of the unemployed.

After the 2001 recession, however, the long-term share stayed above 20 percent from the fall of 2002 until the spring of 2005. In the months since, it has never dipped below 16 percent. In January, 18 percent of those unemployed had been without work for at least 27 weeks, according to the Labor Department.