The New York Times has finally deigned to report on the fact that the Bureau of Labor’s unemployment rate (aka “headline unemployment”) does an incomplete job of capturing the proportion of the population out of work.

The article by Floyd Norris, “Many More Are Jobless Than Are Unemployed,” is less than complete. Despite its professed objective of shedding light on how the official unemployment releases understate the extent of inability to find work, the article curiously gives short shrift to explaining how employment data is captured. Nevertheless, it does provide a very useful chart that shows how what the Times calls the jobless rate, which is the proportion of the population without jobs, versus with the published unemployment rate: 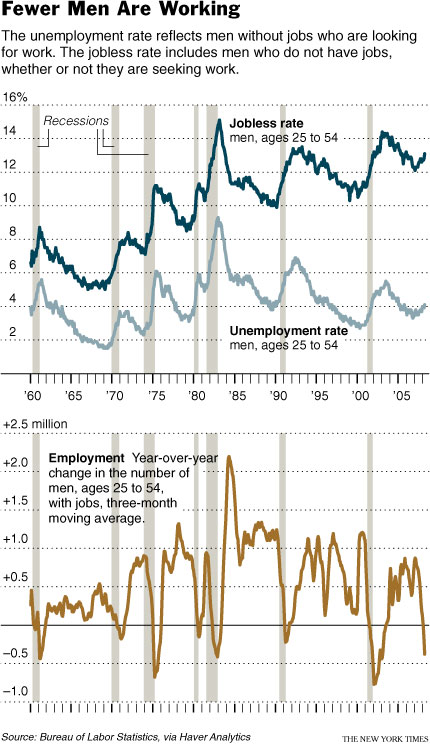 In the top chart, it’s not hard to see that the gap between the two lines. Not only did has it widened since 1982, but the unemployment rate trends broadly downward while the jobless rate rises. Yet the MSM has chosen to ignore how headline unemployment paints a flattering picture of the labor market until consumer disillusionment with the economy has become acute.

From the New York Times:

The unemployment rate is low. The jobless rate is high….

Men in the prime of their working lives are now less likely to have jobs than they were during all but one recession of the last 60 years. Most of them do not qualify as unemployed, but they are nonetheless without jobs.

Only people without jobs who are actively looking for work qualify as unemployed in the computation of that rate. It does not count people who are not looking for work, whether or not they would like to have a job….

In the latest report, for March, the Labor Department reported the jobless rate — also called the “not employed rate” by some — at 13.1 percent for men in the prime age group. Only once during a post-World War II recession did the rate ever get that high. It hit 13.3 percent in June 1982, the 12th month of the brutal 1981-82 recession, and continued to rise from there…

The negative trend can also be seen in the other chart, which shows the annual change in the number of working men in the 25 to 54 age range, using a three-month moving average to smooth the figures.