I am frequently mystified at what goes on in the markets. I am even more mystified when people who ought to know better make pronouncements that appear to be profoundly counter-factual. Even if they are talking their own book, the high odds of being revealed as bald-faced liars proven wrong ought to make them worry about damaging their credibility.

Is this wishful thinking? Delusion? A hope that that a united front can change perceptions and therefore reality? (see this as Tinkerbell behavior: if we all clap together, the markets won’t die).

In the last week, we’ve had the CEOs of Goldman, Morgan Stanley and JP Morgan say that they see an end in the not-too-distant future to the credit crunch. Similarly, Mark Mobius of Templeton argues that all the bad news is already priced into stocks, while private equity investor Wilbur Ross plans to spend $4 billion buying banks (although he professes to be picky)

Mind you, the optimism among the financial services leadership is far from universal. Lehman thinks recovery won’t come till 2009; Paul Calello, CEO of the investment bank Credit Suisse expressed considerable uncertainty as to when the crisis might be over. And the industry’s own analysts, who have strong incentives to argue the bull case, have been far more downbeat than industry executives. Goldman has forecast an “awful” earnings season across the board; Meredith Whitney of Oppenheimer is calling for continued large losses at banks.

I could go through a litany readers know well (and can no doubt improve upon): the housing market is continuing to deteriorate and based on precedents here and abroad, there is no reason to think it will bottom before 2010 or 2011; we are some distance from a typical bear market low of a 30% fall in the S&P (and with the severity of this crisis, we may overshoot); the US has to wean itself off its credit habit, and none of the ways out are pretty; non-government guaranteed securiization has fallen off a cliff and appears unlikely to come back any time soon, yet banks lack the equity to fill the gap with on-balance-sheet intermediation; counterparty risk in the credit default swaps market hangs over the financial services industry like a sword of Damocles.

But let’s put these long-term considerations aside. It’s bizarre to see this upsurge of cheery chatter given the counterevidence in the money markets. Widening TED spreads suggest we are on the verge of another crisis: 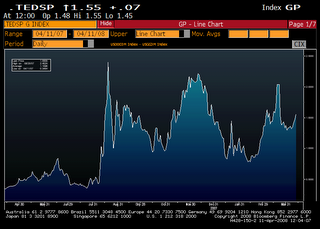 The overnight index swap rate has also indicated bank reluctance to lend to each other. Jeff Frankels provided an update yesterday, with a chart from the Institute of International Finance:

And the report yesterday that banks were fudging on their reporting of Libor is making maters worse. From Across the Curve:

I have related the thoughts of a money market trader at a large shop who has been modestly constructive on his market. The story in the Wall Street Journal this morning which suggetst that banks have been understating the true cost of funding and the true Libor rate has turned this veteran trader less optimisitic. My source believes that this story and the subsequent report that the British Bankers Association will mete out harsh punishment to those found dealing in untruths will lead to an excess of caution over the near term. My trader source reports that inquiry further out on the money market curve has dried up this morning and the only business he has printed is in overnight sector. He thinks the imbroglio could add 5 basis points to 10 basis points to Libor in the near term

Central bankers have thrown a lot of firepower at the problem of a money market seize-up, yet illiquidity persists. What more can they possibly do if we move into another acute phase?

Update 11:30 AM: Reader Scott sent this chart, showing two year US swaps, with the comments. “The concept that the Fed has stabilized the system is fantasy…..queue the Ride of the Valkyries.” 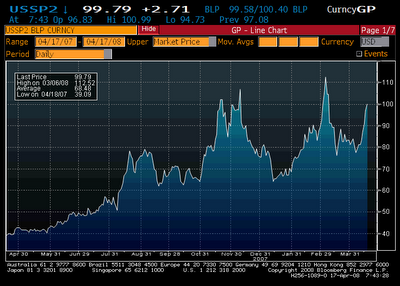