Um, hasn’t anyone heard of the saying, “The customer is always right”? Apparently not, at least if you are a fund manager.

The Wall Street Journal in “Credit Woes Lead Investors to Simplicity,” reports on a KPMG/Economist Intelligence Unit survey of investors carried out in March and April. Having gone to read the report itself, I’m not happy with the Journal’s characterization of it.

The Journal spun the findings as if investors such as pension funds and insurance companies were Luddites and would simply have to adapt to the Brave New World of finance:

It’s easy to see the frayed nerves of credit-crunched investors reflected in the markets. But what changes, if any, will be in store based on the recent pain?

A hefty 70% of institutional investors, such as pension funds, want less to do with derivatives and other complex financial products as a result of the past year’s credit-market turmoil, according to a KPMG survey to be released Tuesday.

Yet, money managers indicate these complex financial products — described in the study as illiquid and hard-to-value instruments — are here to stay.

Derivatives investing is increasing, with some 60% of retail and other mainstream fund managers using them — a number that nears 75% among managers overseeing $10 billion or more, KPMG says. Derivatives are also popular among hedge funds and private-equity firms. Used appropriately, managers note, they can offset volatility in stocks and other securities and boost returns.

So what is the remedy to customer resistance? Hire talent from investment banks:

So what can investment managers do to shore up their reputations and rebuild the trust of clients who’ve pulled money? “Fund managers have huge opportunities to hire world-class people from investment banks” that are shedding talent, says James Suglia, chairman of KPMG’s global alternatives advisory committee. Managers also have to improve the ways in which they value derivatives and take responsibility for describing the instruments and their risks in ways investors can understand. “This is less about transparency and more about simplicity and standardization,” says Suglia, who helped plan and analyze the survey.

If I were an investor, I would not take great comfort from the fact that product designers who had helped cripple the global financial system and in many cases damage their own firms were now involved in managing my money.

What would make derivatives more user friendly is getting them traded on exchanges, which would increase transparency and standardize terms. But that isn’t considered seriously in the KPMG report.

The idea that you can “describe instruments in terms investors can understand” is fraught with peril. To have a real understanding of many of types of derivatives requires not merely a solid grounding in calculus, but enough continued use of it that you have an intuitive feel for how at least the more common variants of certain types of derivatives behave. Having the fund manager describe instruments whose behavior is non-linear and complex to clients that don’t have the math skills puts the fund manager in the INEVITABLE position of making simplifications which are bound at some point to prove inaccurate. That means the fund manager is running a real risk of misrepresentation of risk in trying to communicate the behavior of these products to less sophisticated clients. Has anyone thought through the liability issue here? Isn’t it easier to sell the customer what he wants and understands rather than what you think he ought to want?

The report is more nuanced, but the details give one even less confidence in the recommendation to put the objectives of the vendor over the preferences of the customer. To wit:

There is evidence, in the light of the credit crisis, that some aspects of fund management require urgent attention. The skillsets of staff, for instance, have to some degree failed to keep up with growing sophistication. One in five fund managers that have invested in complex financial instruments, such as derivatives, CDOs or structured products, admit to having no in house specialists with relevant experience.

It’s a safe bet this level is underreported. Back to the survey findings:

There is a widespread feeling that fund management firms need to re-evaluate what kind of business they are conducting and the risks they are running. Four out of ten firms surveyed for this report say they have already formalized risk frameworks in the past two years as a result of managing more complex strategies, with a similar number planning to do so over the coming two years. Valuation methods have come under intense scrutiny during the credit crisis and a third of firms have reviewed this activity, while a further third will do so in the next two years.

I may be reading too much into this bland statement, but these kind of reviews and changes generally occur as the result of major screw-ups. Again, not encouraging in terms of the ability of fund managers to handle these products safely. And get this:

An even higher proportion, 38 percent of respondents, have reviewed governance arrangements – particularly relevant in the cases of funds that used risky instruments to enhance returns on supposedly low volatility funds – and a further quarter will do so in the next two years.

So the firms had sufficiently lax controls and/or lacked the understanding of the instruments that a significant minority had funds using derivatives to incur higher risks (of course in search of higher returns) in excess of the risk parameters for the funds. Charming.

So the report clearly indicates that investors are right to be wary: the fund managers in many cases didn’t have enough expertise to handle high-octane strategies, and worse, allowed supposedly low risk funds to use derivatives in an apparent attempt to circumvent their risk constraints. 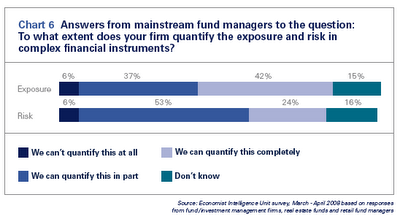 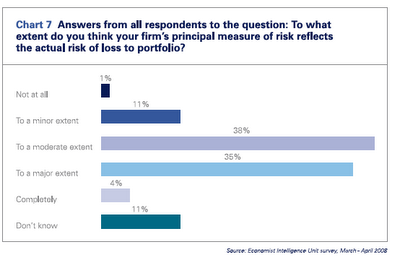 But KPMG still delivers a “Dare to be Great” speech:

The credit crisis will sharpen the minds of fund managers: in a time of increasing uncertainty and investor conservatism, they need to demonstrate their added-value proposition. The concern is that investors will reject further innovation, particularly if it involves complex strategies and instruments. As mentioned previously, 70 percent of investors say the credit crisis has reduced their appetite for complex products. The fund management industry will need to prove the doubters wrong by developing products and services that perform well over the cycle and in changing economic environments.

Maybe instead it’s time for investors to recognize that there is no such thing as a free lunch. If a product beats an index, it’s a given that you are assuming more risk than simple market exposure. And you are probably paying extra fees for this privilege too. Investors, in their new-found desire for simplicity, may also start to set more modest and realistic objectives in light of their true tolerance for losses. And fund managers may also have to adapt to an era of less complex products and lower fees.