I’ve kept seeing mention of a possible 75 basis point cut by the Fed. As much as some traders seem to be lobbying for it, your humble blogger would regard Fed setting its policy rate at that level as entering the famed ZIRP (zero interest rate policy) land that has played a big part in persistent deflation/stagnation in Japan.

Now some have said that cutting rates that low would merely be the Fed endorsing the fact that the effective Fed fund rate has been below 1% for a few weeks. But that may well be the result of not having worked the bugs out of some of the Fed’s shiny new tools, particularly paying interest on reserves. As the blog News ‘N Economics noted last week (hat tip Mark Thoma): 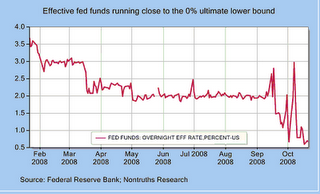 Apparently the Fed was not paying enough reserve interest because the effective rate has been trading low, 0.67%, which is well-below the Fed’s target, currently 1.5%. The increased interest payments on excess reserves should increase the reserves held with the Fed, and drive up the effective federal funds rate. However, this is a new policy tool, and the correct rate still needs to be hammered out by the FOMC.

The dollar fell for a second day against the euro on bets the Federal Reserve will lower interest rates by as much as three quarters of a percentage point today.

The U.S. currency also declined against the yen and the British pound on speculation the central bank will continue lowering borrowing costs as rising unemployment and sliding home values cause the world’s largest economy to contract. U.S. consumer confidence slumped to a record low this month as stocks plunged and banks shut off credit, a report showed yesterday.

“When the dust settles, the dollar’s fundamentals will pressure it to go lower,” said Masahiro Sato, joint general manager of the treasury division in Tokyo at Mizuho Trust & Banking Co., a unit of Japan’s second-largest publicly listed lender. “Traders will focus more on falling rates and the rising costs of fixing the U.S. economy.”