Willem Buiter is being proven right even sooner than he probably expected. The CBO provided a simply atrocious (but I imagine not surprising if you are up on such matters) report that the Federal budget deficit will come in just shy of $1.2 trillion, and that before any stimulus related deficits are added in, which are now expected to be $775 billion.

And it appears the CBO is working with pretty optimistic assumptions, so the budget gap ex Obama programs is likely to have been larger:

That section reminds me of Paulson’s closed door threats to Congress, that if the TARP wasn’t passed, armageddon would result. We appeared to have had that anyhow in October, with (or perhaps even due to) the TARP. The market-watching crowd that corresponds with me expects unemployment to peak at 10-12% even with a stimulus program (although I think they are a tad more optimistic about economic recovery by maybe a year or two).

If they think that that is the worst that the downturn will get, I guarantee their revenue estimates are way too optimistic. The base line is too high.

Robert Sunshine, acting CBO director, said that the subsidy cost of the $700bn bail-out fund known as the Troubled Assets Relief Programme was estimated at about $189bn. This amounts to an average subsidy of about 25 cents for each dollar spent. The cost of taking control of Fannie Mae and Freddie Mac was $238bn, he said, though this was almost entirely a one-off expense.

The idea that trillion dollar deficit has already occurred starring everyone in the face.

Now just how is it that Obama’s extra $750 billion spending, combined with lower tax revenues due to recession will result in lower nominal deficit for 2010 and virtually unchanged nominal GDP in 2009?

Either incremental deficit spending will have to well exceed 1 trillion for 2009-2010 which will then put the budget deficit at close to 10%, if not more of GDP or nominal GDP will decline substantially more than 5% for lack of adequate fiscal stimulus.

They can’t have it both ways; lower deficits and unchanged nominal GDP.

My guess is Obama spends that $750 plus, the deficit goes to close to $1.5 trillion, nominal still goes down because of the lag effect of the stimulus and, presto, the deficit as percent of GDP goes over 10%.

Yes, one and one still equal two and the sooner the folks in DC figure this out the sooner they can get their nominal GDP growing again.

Otherwise, pleas, someone, explain what is going to cause nominal GDP to go from negative 5% plus in 4thQ 2008 to almost unchanged in 2009.

Not even Bernie Madoff could get to those numbers. That is unless Ms. Romer thinks that monetary stimulus will do the trick all by itself.

It must be that CBO was just to horrified to print a deficit number that was in the double digits as percent of GDP (click to enlarge): 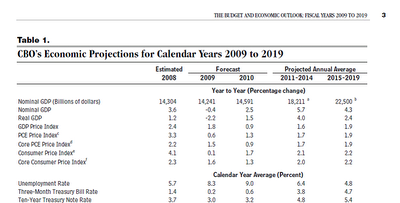