[Reader note: I thought it useful to add commentary around the FDIC data. Those that would prefer to skip straight to it, see the chart and read paragraphs 4-9].

Conventional wisdom says that financial companies are having trouble borrowing because credit markets are broken. This is dangerously wrong. The credit market itself is fine. It’s balance sheets that are broken. They have so little equity relative to their assets, there’s no cushion to protect creditors from losses. With few good borrowers available and with the price of credit capped by government, naturally creditors have little inclination to lend. Washington’s solution is to “guarantee” all manner of risky investments, to use the public’s balance sheet to absorb trillions of dollars worth of private sector losses. We’re told this will “restore confidence” in borrower balance sheets, leading to increased lending. But this policy is dangerously misguided and may very well lead to economic Armageddon.

In point of fact, our fractional reserve financial system is just a gigantic Ponzi scheme. It can only survive as long as it expands, which is to say, as long as new debt is flushed through the system to finance old debt. But like all Ponzi schemes, the larger it grows the more unstable it becomes. Eventually, it too will collapse of its own weight.

With this in mind, government should be concerned with paying down debt, not expanding it. Deficit-financed bailouts and stimulus only increase the size of the Ponzi. The bigger it grows, the harder it will crash. 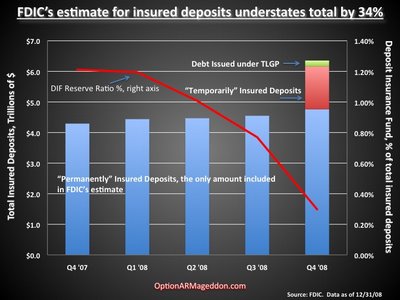 My thoughts came back to this recently when I looked at FDIC’s 12/31/08 balance sheet. Note at the bottom of that link the estimate for total insured deposits: from Q3 to Q4 it increased only a smidge, to $4.8 trillion from $4.6 trillion.

Odd, no? Why such a small increase even though FDIC dialed up deposit insurance limits so significantly during Q4? FDIC Senior Banking Analyst Ross Waldrop told me during an interview last week that it’s because so-called “temporary” increases in deposit insurance are excluded. If included, these would boost total insured deposits from $4.8 trillion to $6.2 trillion.

FDIC’s total commitments would increase an additional $224 billion to $6.4 trillion if you include debt issued prior to the new year under FDIC’s “Temporary” Liquidity Guarantee Program.*

In early October, FDIC boosted deposit insurance limits for individual non-retirement accounts to $250k, which, according to Waldrop, added $713 bilion to total insured deposits. He also noted that new insurance on non-interest bearing transaction accounts added $684 billion to the total.

Waldrop wouldn’t comment on the validity of excluding temporarily insured amounts from the total.

It seems intellectually dubious, if only because there’s little chance FDIC will actually allow the temporary increases to expire. Doing so would risk sparking depositor panic, precisely what FDIC is trying to avoid.

What does this have to do with Ponzis? When Bernie Madoff’s scheme collapsed, he owed somewhere north of $50 billion to his investors but had only a tiny fraction left in the bank. FDIC’s potential liabilities as of Q4 were $6.35 trillion. It has but a tiny fraction of that amount—$19 billion—in the Deposit Insurance Fund. Readers might argue that comparing the two is unfair; FDIC has an open line of credit on the U.S. Treasury. So FDIC’s credit is as good as Uncle Sam’s.

But how good is his? Already, the federal government has committed $12.8 trillion to fight this financial fire (a figure that doesn’t include FDIC’s $6 trillion worth of insurance commitments). Then there’s the trillions of unfunded liabilities for private and public pension schemes that Uncle Sam may be forced to absorb. Also there’s Obama’s budget deficits, which will commit us to borrowing trillions more over the next decade. Finally and most importantly, our unfunded liabilities for Medicare and Social Security surpass $50 trillion.

At the end of the day, after borrowing and money printing have been maxed out, the federal government’s credit is limited by the taxes it can collect from the American people. No way no how can Americans pay for all of the above. It would cost every one of us hundreds of thousands of dollars today. Yet society still feeds the collective delusion that government liabilities are “risk-free” because it has a printing press. But printing is just default by another name: inflation. And the more we come to rely on government guarantees, the more unstable they become…

Fannie and Freddie were just the most obvious examples of how terribly this can backfire. Perhaps trillions of dollars flowed through Fan/Fred into the mortgage market as a result of the government’s implicit (now explicit) guarantee of their debt. This helped inflate a bubble that is now bursting spectacularly.

FDIC deposit insurance is an even more insidious guarantee, the “crack cocaine of American finance” as Martin Mayer put it in his definitive book

on the S&L crisis. He showed how deposit insurance was to blame for that episode as risky bankers leveraged FDIC insurance to attract funding to finance ill-conceived investments. The best way to rob a bank, after all, is to own one.

Depositors didn’t care how much risk bankers took with their money. It was federally-insured. Might as well go with the bank offering the highest interest rate. One of my favorite contemporary examples is the ad I see for GMAC’s above-market CD rates in WSJ’s A section every week. GMAC is insolvent. It’s asinine for depositors to keep funding them.

The government is encouraging precisely that with $5 billion of TARP bailout money and the protective wrap of FDIC deposit insurance. GMAC now operates courtesy of the government’s promise to insure its creditors. This is true of the entire banking system at this point…

The dirty little secret, as noted above, is that the government has no reserves with which to fund its guarantees. As they become payable, its only recourse is to borrow.

This guarantee shell game continues only because Uncle Sam has borrowing capacity to keep it going. That capacity derives not from balance sheet strength (again, no reserves) but from the dearth of investors’ options. Everyone worldwide knows Uncle Sam is broke. But government-insured accounts remain the last refuge for their accumulated paper wealth, which—in a fractional reserve banking system—is largely an illusion to begin with. In such a system, paper wealth exists only to the degree that debts are serviced. And debts are serviced only to the degree that credit continues to expand. Remember, it’s just one giant Ponzi scheme.

This is not hard to grasp, actually.

The vast majority of the economy’s wealth exists only on pieces of paper that record the accumulated funds stored in financial accounts. Contemplate your own bank statement for a moment: what does the balance figure at the bottom represent? Money that you previously gave the bank that it has since shoveled out the door to borrowers. In other words, your paper wealth only “exists” to the extent that bank borrowers pay back their debts. Money and debt are mirror images of each other: your money is someone else’s debt.

Here we have arrived at the cause of the present crisis. Credit expanded so spectacularly during the recent asset bubble, paper wealth itself expanded spectacularly. But this wealth was an illusion of course. As debtors default, paper wealth disappears. The Ponzi unravels.

Ponzi schemes aren’t “solved” through continued expansion. This delays the day of reckoning, sure. But only at the cost of magnifying losses fantastically. No one would have suggested extending Madoff investors a government guarantee. Why then are we offering guarantees for customers of Chase, Citi, BofA and Wells Fargo, far larger Ponzi financiers all of them?

The answer, of course, is they are “too big to fail.” Had Madoff been sporting a trillion-dollar balance sheet, you can bet the government would have offered bailout funding to prevent a disorderly collapse.

But there’s a fine line between too-big-to-fail and too-big-to-rescue. Ask the folks in Iceland, Ireland, and most of Eastern Europe. The Ponzis at work in their financial systems grew so large there is simply no orderly way to unwind them. We risk the same fate here in the U.S. by offering open-ended guarantees to bank customers.

The fact is, a bank run can be a healthy thing as it discourages investors and depositors from allocating too much cash to unstable institutions. Unfortunately, by removing all discipline that the possibility of failure provides, we have permitted our financial institutions to grow totally unchecked. The just desserts of moral hazard you might say.

A counter-argument here is that government guarantees have actually prevented capital flight. Without all these new guarantees, the system would have crashed back in October as investors and depositors raced to cash out simultaneously. But the guarantees we’ve extended haven’t prevented that, they’ve merely delayed it.

The longer the government leaves its various guarantees in place, the more capital will flow to protected investments, much as it did to Fannie and Freddie. The Ponzi will continue to expand until confidence in Uncle Sam’s balance sheet is itself destroyed. At that point, the unwind will be far uglier that if we had paid down the national debt while executing a proper bank recapitalization, i.e. wiping out shareholders and forcing losses onto creditors.

What was true for Madoff is true for the U.S. financial system: In order to contain collateral damage, it’s best to unwind Ponzis as soon as possible.

*Total TLGP-backed debt issuance was $321 billion through the end of March. Because data for FDIC’s other “temporary” insurance schemes is only available thru 12/31, that’s what I’ve included for TLGP in the chart.