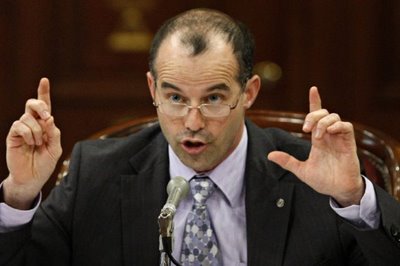 The Caisse de dépôt et placement du Québec (Caisse), through its representatives, provided clarification on its 2008 financial results at the public hearing held today in Québec City by the National Assembly’s Committee on Public Finance:

The statements are in French, but there was some media coverage in English. What the committee heard was that the Caisse ignored warning signs:

Days before the market for non-bank commercial paper collapsed, in August 2007, the Caisse de depot et placement du Quebec was still buying the paper, which turned out to be tainted investments.

Claude Bergeron, senior vice-president of legal affairs at the Caisse told a Quebec legislature committee Tuesday that despite the warning signals, which he described as “a certain panic” a month earlier, the Caisse did not foresee the collapse.

“No one could predict that a few days later we would live through such an event,” Mr. Bergeron said Tuesday.

He told the committee, which is looking into how the Caisse lost $40-billion in the value of its portfolio last year, that Caisse managers considered the commercial paper to be safe, an opinion reinforced by the DBRS bond-rating service, which blessed it with its top AAA rating.

Mr. Rousseau has accepted responsibility for the Caisse investment in the non-bank commercial paper, which accounted for $4-billion of the $40-billion lost last year.

Mr. Bergeron explained that the Caisse had been buying the commercial paper since 1998, because it carried a bit more interest than treasury bills, the conventional way the Caisse held its liquidities.

“We adopted the behaviour of the market,” he said.

In addition to the AAA rating, because the assets backing the notes were from several sources, this plurality of assets reduced the risk, Mr. Bergeron said.

The market for commercial paper collapsed when investors realized they were backed by subprime mortgages and other dubious assets.

A bit more risk than T-bills? Hah! Try a hell of a lot more risk than T-bills. What exactly was the spread over T-bills? If it was a nominal spread (20 basis points), appearing to be safe, then why didn’t this spread accurately reflect the liquidity risk and embedded leverage risk of the trusts? Moreover, why did the benchmark governing the cash portfolio not reflect credit risk, liquidity risk and embedded leverage of non-bank ABCP? How much money did the money market portfolio managers and senior management make over the last five years as they easily beat this bogus benchmark?

Everybody in the world knows what Treasury bills are, including my 90 year old aunt. But when you start buying crap that some ratings agency slapped a “AAA” rating (DBRS rated ABCP R1, the highest rating for commercial paper) on without conducting your own proper due diligence on the underlying investments, you are either completely incompetent or willfully trying to game your benchmark by buying assets with a liquidity mismatch and credit risk so you can then turn around to collect a big bonus at the end of the year. It’s the scam of the century and Quebecers should be outraged.

Fernand Perreault, the former interim head of the Caisse and Richard Guay, the man he replaced, also spoke at the hearing:

Fernand Perreault, the former head of the Caisse, also testified and attributed the disastrous result in 2008 to the “error” of acquiring so much asset-backed commercial paper and to the collapse of the market.

Perreault, who was interim CEO after the departure of Richard Guay, said the Caisse would have done well had it not been for the ABCP and the exceptional circumstances.

Perreault also defended the Caisse’s risk management policy, which has been cited as one of the reasons for the pension-fund manager’s poor performance in 2008.

He said the Caisse’s policies were similar to those of other financial institutions.

Perreault later admitted the practices constituted “too high a risk” by the end of 2008, when the markets were in freefall.

“Our practices in terms of diversification, leverage, risk management, variable pay, were neither new, nor unique, nor unusual nor excessively risky in the context that existed before the fall of 2008,” Perreault said.

Guay also testified Tuesday at the commission, saying he was exhausted and overwhelmed by the effects of the financial crisis while in the top job. He said he preferred to quit his post rather than make mistakes at the helm of the financial institution.

“I did not know that the financial crisis would reach such a scale,” he said.

Guay said he was beset by anxiety and fatigue shortly after taking the job and took the “difficult and agonizing” decision to return to the sidelines.

“I was split between my duty to the organization, to support the management and my colleagues to find a solution to the financial crisis which had hit the Caisse’s holdings and my fears of making mistakes due to fatigue,” he said.

Here is what irks me. The Caisse invests in the best hedge funds in the world. You’d think some of these “geniuses” would have told them that they saw trouble brewing after those Bear Stearns hedge funds folded back in June 2007. That was the first sign that counterparty risk was set to explode.

Importantly, it’s just too easy to say “we didn’t see this coming” when in reality it was their job to protect the fund’s total assets from such a disaster scenario. What exactly was the game plan?

Keep in mind Mr. Perreault is the Head of Real Estate at the Caisse, and in my experience, most real estate managers don’t have a clue about proper risk management in public markets.

All in all, the media coverage of these hearings is flimsy. I hope we get better coverage next week when the big guy – Henri-Paul Rousseau – shows up to testify. That should be interesting.