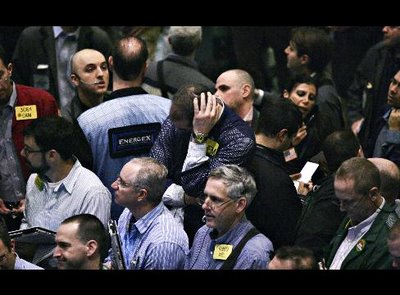 All around the world, pension tension is growing. You’re only beginning to see what I’ve been predicting for a long time. It’s one huge mess. Here is a small sampling of global pension tension:

That last points should give many who work in the public service some cause for concern. I know many people in the public sector who think their defined-benefit plans are “iron-clad” and that their benefits will never be cut and that they can retire at the age of 60.

They are in for a rude awakening. I can guarantee you that as the pension pandemic continues to wreak havoc on public finances, some very hard choices will be taken, including cutting pension benefits and raising the retirement age. This is why I think people need to start taking matters in their own hands and at the very least educate themselves about their investment choices.

Finally, a telling sign that global pension tension has reached a boiling point. According to Emily Brandon of U.S. News & World Report, a survey of Americans want pensions back as they are planning to retire:

Americans with shrunken nest eggs are feeling nostalgic for pensions. About half of those without a pension (55 percent), say the old-fashioned retirement plan would ease their money worries, according to a National Institute on Retirement Security survey. However, not all workers with pensions are sleeping soundly. Only about 65 percent of Americans with a pension are confident that the payout will be there at retirement.

Since traditional pensions aren’t likely to make a comeback in the near future, the survey also asked what workers are looking for in a retirement plan. The most desired features are portability (88 percent), followed by an employer contribution (84 percent), continuation of payments for a spouse after death (79 percent), and a regular check that cannot be outlived (79 percent), the telephone survey of 801 Americans age 25 or older by Mathew Greenwald & Associates and the National Institute on Retirement Security found. Respondents were less interested in managing investments (50 percent) and having an employer foot the entire bill (48 percent).

The number of workers with traditional pensions has been declining steadily for 2 decades. About 28 percent of workers consider a pension that pays out benefits for life to be a major source of retirement income, down from 46 percent in 1998 and 57 percent in 1988, according to the Employee Benefit Research Institute. More people are expected to rely on their 401(k) (42 percent) and Social Security (32 percent).

Tell us, what are you looking for in a retirement plan?

What am I looking for in a retirement plan? Let’s start with a pension system that is based on full transparency and accountability. I would love to see pension funds consistently deliver risk-adjusted returns but that will only happen once they get the governance right and clean up benchmark abuses and systemic fraud.

On the issue of fraud, I almost gagged today as I read a Bloomberg article where Michael Travaglini, Massachusetts system executive director said that the move by some U.S. public pension funds to ban middlemen who market the services of private equity and hedge fund investments is misguided.

Misguided? What planet does Mr. Travaglini live in? Is he totally oblivious to how the web of middlemen “catering” to public pension funds has corrupted the U.S. pension system?

As global pension tension builds there will be more fallout. We are only beginning to see the first wave of the great pension tsunami.

When the full fury of the pension storm strikes, many will be surprised and shocked to find out how weak their retirement plans really are.

Does anyone else think it is high time for a global summit on the pension crisis?