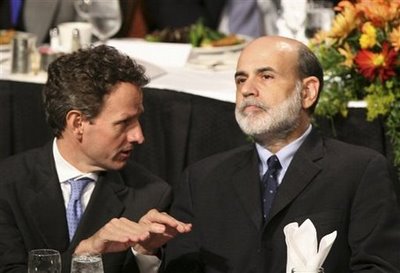 On Friday, the head of the Securities and Exchange Commission said that she favors a new proposal for federal regulators sharing oversight of companies that pose financial risks to the economy:

SEC Chairman Mary Schapiro said she’s “inclined toward” the idea floated this week by the head of the Federal Deposit Insurance Corp. for a new “systemic risk council” to monitor large institutions against financial threats. The council would include the Treasury Department, Federal Reserve, FDIC and SEC, according to the proposal by FDIC Chairman Sheila Bair.

Congress and the Obama administration are working to craft an overhaul of U.S. financial rules to prevent a repeat of the crisis that plunged markets worldwide into distress.

Speaking to the Investment Company Institute, the mutual fund industry’s biggest trade group, Schapiro said she is concerned about an “excessive concentration of power” over financial risk in a single agency.

Some key lawmakers have proposed that the Fed alone assume the role of systemic regulator.

But Sen. Christopher Dodd, D-Conn., chairman of the Senate Banking Committee, said this week he is “more attracted to the council idea” than having a single regulator play that role.

Policymakers want to replace the “too big to fail” model used by the government as it rushed in to rescue huge financial institutions caught up in the global crisis last fall.

Regulators are calling for a new system of supervision that prevents institutions from taking on excessive risk and becoming so large their failure would threaten the financial system.

At the same time, Schapiro on Friday reaffirmed her position that the SEC must play a key role as an independent watchdog protecting investors in the new system of financial regulation.

“There is a need for a regulator entrusted with responsibility for our capital markets,” she said. For the SEC, “independence is indispensable.”

Staking out the SEC’s position in the sweeping overhaul of the financial rule book that Congress and the administration have begun, Schapiro said it “would be a disaster” for that supervision over the markets to be split among various agencies.

Schapiro, an Obama appointee who became head of the SEC in January, stressed to the audience of mutual fund executives how hard Americans have been hit by the worst economic crisis in 70 years.

Around 92 million Americans entrust $9 trillion of their savings to mutual funds, and retirement savings plans were devastated by the stock market slide beginning last fall. The market has been on an upward swing since early March, rising more than 25 percent from 12-year lows, but the climb back remains steep and investors are rattled.

“The SEC is acting aggressively” to become a stronger and more agile regulator to help restore investor confidence, Schapiro said. The agency is revamping and strengthening its enforcement program, she said, and already this year has stepped up the number of actions taken against investment fund managers and others alleged to have violated securities laws.

On Tuesday, the SEC filed civil fraud charges against Reserve Management Co. Inc. and its two top executives, alleging they withheld key facts from investors when its $60 billion money-market fund “broke the buck” last fall after Lehman Brothers filed for bankruptcy protection. The Primary Fund, which had invested $785 million in Lehman’s debt, saw the value of its assets fall to 97 cents per investor dollar put in — below the dollar-for-dollar level needed to fully repay investors.

New York-based Reserve Management said it “intends to defend itself vigorously” against the SEC’s allegations.

About $46 billion, or about 90 percent of fund assets, have been returned to investors, the company has said. Schapiro said Friday the SEC is working to recover more money for them.

In the wake of the episode, the SEC is considering how regulation of money-market mutual funds could be tightened to better protect investors, she said.

The Investment Company Institute has proposed its own tightened rules for money funds. They include toughened requirements to screen money fund investments for safety, and to ensure that fund companies can return cash on demand to investors — even if redemption orders come in a panic-induced rush. The industry is rejecting private insurance to protect investors against losses, and opposes easing current requirements that money funds hold at least $1 in assets for each investor dollar put in.

Schapiro called the trade group’s proposals “helpful,” but has said the SEC’s eventual rule changes are likely to go further.

On Saturday, news broke that the Obama administration wants the Federal Reserve to be the financial supercop:

The Federal Reserve could become the supercop for “too big to fail” companies capable of causing another financial meltdown under a proposal being seriously considered by the White House.

The Obama administration told industry officials on Friday that it was leaning toward making such a recommendation, according to officials who attended a private one-hour meeting between President Barack Obama’s economic advisers and representatives from about a dozen banks, hedge funds and other financial groups.

Treasury Secretary Timothy Geithner and other officials made it clear they were not inclined to divide the job among various regulators as has been suggested by industry and some federal regulators. Geithner told the group that one organization needs to be held responsible for monitoring systemwide risk.

“Committees don’t make decisions,” said Geithner, according to one participant.

Officials from the Treasury Department and National Economic Council, which hosted the meeting, told participants that the Fed was considered the most likely candidate for the job, according to several officials who attended or were briefed on the discussions.

The administration officials said a legislative proposal would likely be sent to Capitol Hill in June with the expectation the House Financial Services Committee, led by Rep. Barney Frank, D-Mass., would consider the measure before the Independence Day recess.

The officials requested anonymity because the meeting had not been publicly announced and they were not authorized to discuss it.

A Treasury Department statement provided to The Associated Press on Friday confirmed Geithner’s position that he wants a “single independent regulator with responsibility for systemically important firms and critical payment and settlement systems.”

A spokesman said Geithner also is open to creating a council to “coordinate among the various regulators, including the systemic risk regulator.”

The Fed itself hasn’t taken a position on whether it should have the job, although Chairman Ben Bernanke has said the Fed would have to be involved in any effort to identify and resolve systemwide risk.

It is interesting to see how the we are getting two sets of messages here – one on federal regulators sharing oversight and the other proposing that the Fed be the “finance supercop”.

No matter who is in charge of overseeing systemic risk, federal regulators need to attract more qualified employees who are able to connect the dots and dig further into every aspect of systemic risk. The regulators will also need to work with their counterparts across the world.

I will back later today or tomorrow to discuss my thoughts on the “W” recovery.