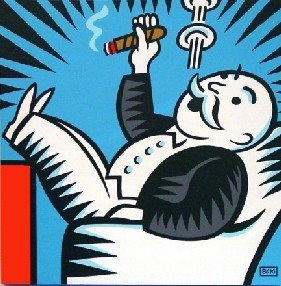 Steven Pearlstein writes in the Washington Post, Regulatory Reform That Falls Far Short of It:

What does it tell you when banks, investment houses, insurance companies and derivatives traders are so pleased with their regulators that they are prepared to pull out all the stops to keep them?

What it tells me is that the current system of financial regulation has been thoroughly captured by the companies it was meant to restrain — and that the only way to put things right is to bring in new rules, a new structure and tough new regulators. Anything short of that, and you can almost guarantee that the inmates will be back in charge of the asylum by the time the next bubble starts to develop.

Judged by that standard, the proposals the Obama administration put forward this week to reform the regulatory apparatus were a bit of a disappointment.

If you have to set up a council of regulators just to harmonize the rules used by different bank regulators, why not bite the bullet and consolidate them into a single agency?

How are safety and soundness of the financial system furthered by allowing regulated banks to run “proprietary trading desks” that are nothing more than in-house hedge funds?

Should oversight of giant markets in financial futures and derivatives continue to be regulated by an agency set up to regulate hog prices and corn futures just because members of the congressional agriculture committees can raise political funds from Wall Street fat cats?

Does anyone seriously think the United States would be reduced to a second-rate economic power if there weren’t any CDOs of CDOs, or if the number of credit default swaps on General Electric bonds were limited to the number of outstanding General Electric bonds, or if reasonable leverage limits were put on hedge funds, private-equity funds or structured investment vehicles?

Is there any reason ratings agencies should continue to be paid by the companies that issue securities rather than the investors who buy and trade them?

And is it too much to ask that, in a globalized economy, banks and insurance companies engaged primarily in interstate commerce be required to get federal charters and have federal officials as their primary regulators?

I don’t mean to minimize the political difficulty that would arise from confronting these issues. But given that we have just gone through the worst financial crisis in 75 years, one would hope that the government’s response would be something more than an exercise in political triangulation.

It should have been grounded, first and foremost, in a thorough and independent analysis of how the crisis was allowed to develop and what regulators did and didn’t do to prevent it, drawn from interviews under oath and internal records and made available to the public. That should have been followed by a detailed set of recommendations from a panel of seasoned regulators and independent experts on how the regulatory system should be reformed to prevent similar crises in the future.

If Congress decided to deviate from those recommendations, of course, nobody would be surprised. But at least it would have given the public a marker for reform that was free of industry influence. It would have also provided political cover for the president and members of Congress, a politically acceptable default position that they could have used to turn aside the entreaties of local bankers and campaign contributors when they came knocking.

Instead, the Obama team, hoping to ride the wave of public outrage before it crested, determined to fashion a reform proposal even before a thorough analysis could be completed. And by deciding to contort and trim their proposal to accommodate the objections from powerful interest groups and key members of Congress, members of the Obama team have now made it politically acceptable for everyone to treat this as just another special-interest free-for-all of the sort that helped cause the crisis in the first place.

The good news is that, at the end of the day, it will matter less how the boxes are moved around the regulatory org chart than the quality of the people put in them. It is no coincidence that this crisis developed while the Fed, the Treasury and other agencies were headed by people who were responsive to Wall Street and believed deeply that markets should never be second-guessed by government bureaucrats. And the bureaucrats proved to be exquisitely sensitive to the signals they received from above.

The best way for Obama to change that and avoid the next crisis is to appoint tough and independent regulators who understand that their role is to protect markets from their own excesses while protecting their agencies from being captured by the companies they are meant to oversee.

I had a chance to go through the Treasury department’s Financial Regulatory Reform report and while it is a step in the right direction, I agree with Mr. Pearlstein that it does not go far enough and will unlikely stop another systemic crisis.

And by the way, it isn’t just the big banks that set up prop desks in their shops. Regulators don’t have a clue of what shenanigans are going on at the large public public pensions plans, especially here in Canada where they increasingly undertake complicated internal hedge fund activities.

You do not hear about the guys that lose hundreds of millions when their strategies blow up, but I know it happens at all the large pension funds. They just keep it hush and hope nobody finds out.

All this to say that reforms are toothless unless they encapsulate all financial institutions, including large public pension funds, large insurance companies and even large endowment funds.

If you want jack up the leverage, then regulators should be made aware of this, especially if you are doing it using the retirement contributions of hard working people.

Unfortunately, all this tough talk on financial regulatory reforms is blowing smoke in people’s faces, giving them the illusion that something will be done.

Nothing is being done. It’s all business as usual and the folks that will end up paying the price are the same folks that lost a good chunk of their retirement nest egg to greedy bankers and short-sighted speculators.

The “new foundation” looks impressive but if you scratch beneath the surface, it is toothless and the outcome will be eerily and hopelessly familiar.