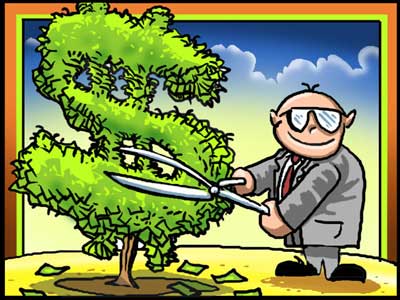 Hurt by the steep decline in the stock market last summer, the Massachusetts state pension fund reported its worst year in its modern history.

The fund lost 23.6 percent, or $12.8 billion, in the fiscal year that ended June 30, according to Michael Travaglini, executive director of the Massachusetts Public Reserves Investment Management Board, which runs the state pension fund. Assets are now down to $37.8 billion.

Historically one of the top public pension funds in the country, Massachusetts is now likely to rank among the worst performers for the past year among all major funds tracked by Wilshire Associates. It is also the first time since 2002 the fund performed worse than average.

The fund’s performance could spell trouble for its chairman, state Treasurer Timothy P. Cahill, as he contemplates a run for governor. Cahill dropped out of the Democratic Party earlier this month and is expected to run as an Independent in next year’s election. He has increasingly criticized Governor Deval Patrick’s fiscal management of the state.

But as pension board chairman, Cahill has taken an active role in the management of the fund. In 2004 Cahill pushed to invest in so-called absolute return hedge funds, which strive to make money regardless of the overall market’s performance. Such investments, he argued, would limit losses during periods when the US stock market posts steep declines.

That has worked–to a degree. The state fund has considerably less of its money invested in US stocks than five years ago, and the hedge fund component of its portfolio declined much less last year than did its stock holdings. But the Massachusetts fund still had a large exposure to stocks of foreign companies–25 percent–greater than what most other public pension funds maintain. Foreign stocks performed just as poorly as US stocks last year, down 31 percent.

Meanwhile Massachusetts has lower levels of bond holdings than other public funds. That investment made money–up 4.3 percent–in the fiscal year.

“Given those weightings,” Travaglini said, the state fund “will outperform during bull markets and underperform during difficult equity markets.”

Travaglini said the board will re-evaluate its investment strategy at its next meeting on Aug. 5.

Some of the poor performance was attributed to failings of fund managers hired by the state agency. Four fund managers were fired within the last year including one–Austin Capital Management–that lost $12 million to convicted swindler Bernard L. Madoff. And in April, the pension fund replaced its long-time alternative funds consultant, Cliffwater of Marina del Rey, Calif., with Ennis Knupp & Associates of Chicago.

Travaglini said the fund would have lost only 20 percent if it had simply invested its money in index funds — rather than hand-picking stocks and other investments.

So how are hedge funds doing nowadays? Bloomberg reports that hedge funds had a record rally last quarter:

Hedge funds had net inflows of $6.2 billion and returned an average 0.2 percent in June, rounding off a record three-month rally, Eurekahedge Pte said.

The advance by the Eurekahedge Hedge Fund Index, tracking more than 2,000 funds, follows 3.2 percent and 5 percent gains in April and May, respectively, and brings its 2009 advance to 9.5 percent, according to a report by the Singapore-based research firm.

Hedge fund managers are making a comeback after suffering their worst year on record in 2008, outperforming global benchmarks including the MSCI World Index, which rose 4.8 percent in the first six months. Hedge-fund assets rose for the second consecutive month in June, the first back-to-back increase in a year, bringing total assets under management to $1.33 trillion, the report said.

Gross inflows to the industry totaled $19.2 billion last month, compared with $13 billion in redemptions that were mainly from so-called funds of hedge funds, as investors sought to lower fees and optimize returns by investing directly, the report said.

Assets of funds invested in Latin America rose 1.8 percent in June from May to $44.7 billion, the biggest percentage increase among five geographical categories, on the view that markets in this region will recover along with the economies as demand for commodities increases, the report showed.

Manager allocations to Japan followed with a 1.5 percent increase to $13 billion, while those for Asia ex-Japan and North America each recorded 0.5 percent increases to $93.3 billion and $877.4 billion, respectively. Assets of funds investing in Europe were little changed at $304.4 billion, Eurekahedge said.

By strategy, managers of so-called event-driven funds that invest in companies such as those involved in mergers and acquisitions had the largest increase in capital, gaining 1.5 percent with inflows of $2.2 billion, as investors bet that an increase in deals will offer lucrative opportunities, Eurekahedge said. An index tracking the strategy has gained 19.1 percent in the first half of 2009, making it the best performer, the report said.

In May, hedge-fund assets increased by a net $38 billion, the report showed.

Hedge funds are mostly private pools of capital whose managers participate substantially in the profits from their speculation on whether asset prices will rise or fall.

Finally, David Prosser of the Independent writes: At last, some good news for hedge funds:

There is good news in sight for the beleaguered hedge fund industry courtesy of our friends in the US.

Grimly aware that a European Commission crackdown on regulation of hedge funds and private equity spells disaster for the EU’s predominantly London-based industry, Treasury ministers have been desperately lobbying their counterparts in Brussels for months, but their pleas have fallen on deaf ears.

Now, however, the Americans have woken up to the fact that many of their hedge funds would find it impossible to do business in the EU under proposals for regulatory reform. In recent weeks, US Treasury officials have thus been touring the EU, letting their displeasure be known.

It appears that the Americans’ involvement is already paying dividends. Sweden, which holds the EU presidency, was quietly letting it be known yesterday that it will ensure some sort of compromise is brokered. The Alternative Investment Management Association, which represents the sector’s interests, now thinks disaster may be averted.

That’s good news for London. Hedge funds and private equity investors have been popular whipping boys in this country for too long. Before the credit crunch, the fashion was to accuse the latter of asset-stripping and profiteering. Once the crisis began, the focus moved to greedy hedge funds and dishonest short selling, though not a scrap of evidence of wrongdoing has ever been produced.

By all means dislike them if you must, but London’s 450 or so hedge funds manage about £250bn and employ, directly and indirectly, 40,000 people. We simply can’t afford to allow the business to go up in smoke thanks to a knee-jerk reaction from European regulators.

The real good news for hedge funds is that the markets keep grinding higher. Most hedge funds charge alpha fees for leveraged beta. Sure, they package it nicely, slap on some “risk management” and peddle it through a network of slick salespeople, but at the end of the day, it’s “disguised beta”.

They also got the politicians in their back pockets so I do not expect any major regulatory reforms. And while they collect 2 & 20 for their “alpha”, the rest of society watches the stock market and their portfolios go up and down like a yo-yo.

The irony in all this is that people’s pension contributions are feeding all this volatility. Great news for hedge funds but I am not so sure what it means for the rest of society.