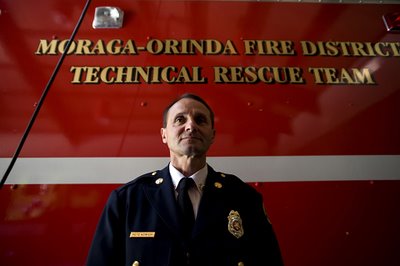 Submitted by Leo Kolivakis, publisher of Pension Pulse.
The WSJ reports that three days before Pete Nowicki announced he was retiring, fire department trustees agreed to increase his salary in a practice called “pension spiking.” The resulting bump in his annual pension has angered colleagues and residents in this Northern California area. (See related article.)
Andrew Ross of the San Francisco Chronicle asks, Who Spiked the Pension?:

Big five-column photo of Moraga-Orinda fire Chief Pete Nowicki in Monday’s Wall Street Journal – though it might not be the kind of celebrity he welcomes. The 51-year-old retiree is fast becoming the poster child for “pension spiking,” that is, making an already generous pension even larger via a pay raise grantedjust before retirement. Nowicki’s boost, as Contra Costa Times columnist Dan Borenstein has reported, came in the form of cashed-in vacation time and other compensation. The raise increased his annual pension from $185,000 to $241,000. Local outrage and vows to reform the system followed the revelation’s wake.

As Nowicki rightly pointed out, “I did not negotiate these rules.” Public sector pension plans allow for such extravagance. Neither is he alone. The retired chief of the San Ramon Valley Fire Protection District, as Borenstein also noted, turned his $221,000 annual salary into a yearly pension starting at $284,000. Meanwhile, as the Moraga-Orinda Fire District Board of Directors looksfor a new fire chief, Nowicki’s working as a temporary fill-in. At $14,700 a month. (Plus pension.)

This is just another example of pensions apartheid. If you think that is bad, you should check out the accrued pension benefits of overpaid senior public pension fund managers that are delivering mediocre performances. You’d need an army to put out that fire.

Speaking about putting out fires, check out the Financial Ninja’s post (HT Displaced EMA): Dark Pools, Goldman Front Running. If true, “Goldman’s collar” is about to get a lot tighter.