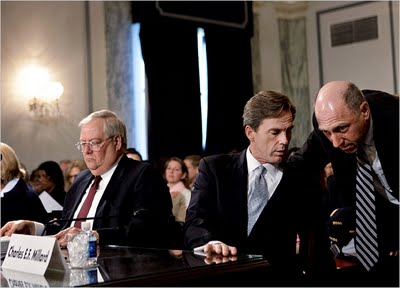 The NYT reports on how firms wooed a U.S. agency with billions to invest:

As a New York money manager and investment banker at four Wall Street firms, Charles E. F. Millard never reached superstar status. But he was treated like one when he arrived in Washington in May 2007, to run the Pension Benefit Guaranty Corporation, the federal agency that oversees $50 billion in retirement funds.

BlackRock, one of the world’s largest money-management firms, assigned a high school classmate of Mr. Millard’s to stay in close contact with him, and it made sure to place him next to its legendary founder, Laurence D. Fink, at a charity dinner at Chelsea Piers. A top executive at Goldman Sachs frequently called and sent e-mail messages, inviting Mr. Millard out to the Mandarin Oriental and the Ritz-Carlton in Washington, even helping him hunt for his next Wall Street job.

Both firms were hoping to win contracts to manage a chunk of that $50 billion. The extensive wooing paid off when a selection committee of three, including Mr. Millard, picked BlackRock and Goldman from among 16 bidders to manage nearly $1.6 billion and to advise the agency, which Mr. Millard ran until January.

But on July 20, the agency permanently revoked the contracts with BlackRock, Goldman and JPMorgan Chase, the third winner, nullifying the process. The decision was based on questions surrounding Mr. Millard’s actions during the formal bidding process. His actions have also drawn the scrutiny of Congressional investigators and the agency’s inspector general.

An examination of thousands of pages of e-mail messages and other internal documents obtained by The New York Times shows the other side of the story: the two firms aggressively courted Mr. Millard, so extensively that they may have compromised federal contracting rules or at least violated the spirit of the law, contracting experts said. The records also illustrate the clash between Washington’s by-the-letter rules on contracting and the culture of Wall Street, where deals are often struck over expensive meals.

“Both sides should have known better,” said Steven L. Schooner, co-director of the Government Procurement Law Program at the George Washington University, who reviewed some of the material for The Times. “What happened here is wrong, stupid and probably illegal.”

BlackRock and Goldman, as well as Mr. Millard, all said that nothing improper happened either before the formal competition for the contract started last July, or while the competition, which concluded in October, was under way.

“Among the reasons that Mr. Millard was selected to head the P.B.G.C. is his understanding of the industry, his extensive background and the quality of his professional relationships,” said Stanley M. Brand, a lawyer for Mr. Millard. “He correctly separated his personal relationships from his official actions.”

A review of the documents shows that the third winner, JPMorgan Chase, had contacts with Mr. Millard before and during the competition, but did not display the same intensity as the other two.

“This is a very big fish on the line,” one BlackRock executive wrote to another, discussing the government official.

Mr. Millard had at least seven meetings with Goldman executives in the year before the bidding started, and 163 phone contacts, the documents show. BlackRock had less frequent contact — 39 phone calls in that 12-month period. But one BlackRock executive told another that Mr. Millard had assured him in April, four months before the bidding, that he wanted to hire the company to help manage some of the money, company documents show.

“It sounds like we may have a tiger by the tail here,” one BlackRock executive wrote in an e-mail message.

The agency takes over pension programs when private companies go bankrupt. For years there was talk it might have to be bailed out by the government, and Mr. Millard, like many others, saw shifting from low-yield conservative investments like Treasury bonds to those with higher risks and higher potential returns as a way to solve the problem.

Before coming to Washington Mr. Millard had been a money manager for Prudential Securities and Lehman Brothers, a senior economic development official in New York City while Rudolph W. Giuliani was mayor, a member of the New York City Council and a Republican nominee for Congress.

Within weeks of his arrival at the agency, he told Goldman Sachs about his plans to shake up the agency’s portfolio.

“I just became head of the pension benefit guaranty corp in dc appointed by pres bush,” he wrote in a June 2007 e-mail message to John S. Weinberg, a vice chairman and a member of the family that has helped run Goldman since the 1930s. Mr. Millard told Mr. Weinberg, a longtime acquaintance, that he wanted to revamp the agency’s investment strategy.

“Is there a team at Goldman that does this and that would be interested in pursuing this business?”

Almost immediately, Goldman started to work informally for Mr. Millard by providing one of its top pension analysts at no charge to prepare at least six reports over the coming year, based on internal agency data, detailing possible investment strategies.

Goldman also coached Mr. Millard as he sought to sway skeptics in the Bush administration.

“Here is the sound bite we discussed in this morning’s meeting,” wrote Mark Evans, a Goldman managing director, in a January 2008 e-mail message to Mr. Millard, seven months before the formal competition would begin.

Mr. Millard consulted with other industry experts during this period, but none so much as Goldman. George Koklanaris, Mr. Millard’s chief of staff, said in retrospect that the detailed analytical work Goldman did for Mr. Millard, and the repeated contacts, might have created an appearance that Goldman had a competitive advantage. Even so, he says he believes Mr. Millard did nothing improper.

Mr. Millard’s lawyer and a Goldman spokeswoman disputed that the firm gained any advantage from this work. The spokeswoman, Andrea Raphael, said the firm had no way of knowing that Mr. Millard was giving them more attention than other prospective bidders and that it was the agency’s job to identify potential conflicts.

The most important player in BlackRock’s attempt to win the business was David Mullane, who had known Mr. Millard since the two attended the same high school. The friendship continues; they both live in Rye, N.Y., and attend the same church.

In his conversations and e-mail messages with the agency head, Mr. Mullane often mixed family and business, talking about his golf game, his vacations, their children, their church (“Great job at Mass again this week,” he wrote in one), invariably shifting into a discussion of his interest in the government work.

“Hope to see you at the Beefsteak Dinner tomorrow,” he wrote to Mr. Millard, referring to a Friday night gathering at Church of the Resurrection in Rye. “If you’re going perhaps we can catch up business for a few minutes before I thrash you in ping pong again.”

After a February meeting, months before the contract competition began, Mr. Mullane wrote his bosses: “Money in motion by February.”

There were more meetings through the winter and spring of 2008, as Mr. Millard prepared his plans. That April, there was a charity dinner at Chelsea Piers, along the Hudson River. One BlackRock executive wrote to another, “Try to get Larry seated next to Charles Millard,” referring to Mr. Fink, the company’s chairman and chief.

After the dinner, Mr. Millard wrote to Mr. Fink, “A pleasure meeting you. No need to respond. I will follow up with you briefly in future re our investment policy and with your team re other specifics.”

The e-mail messages show that Mr. Mullane, a managing director at BlackRock, understood that the firm needed to move quickly, before the presidential election.

“He is a lame duck political appointee as soon as the November election occurs,” he wrote to one BlackRock colleague last June, as the bidding was about to start. “When the new man comes in at P.B.G.C., all bets are off for us.”

As he prepared to open the competition, Mr. Millard, working with Mr. Mullane, sought to restrict the bidders to the biggest players by stipulating that the winner must have thousands of employees and a global operation, e-mail messages show. That decision cut out many boutique firms hoping to compete and gave BlackRock, Goldman and other large firms an advantage. “Neither the company nor any of its employees did anything improper or illegal,” Bobbie Collins, a BlackRock spokeswoman, said.

Mr. Millard, through his lawyer, denied telling BlackRock that he wanted to select the company even before the competition started. Mr. Millard’s lawyer also said he told the agency about his friendship with Mr. Mullane. But Jeffrey Speicher, an agency spokesman, said in a written statement that Mr. Millard “did not disclose his relationship with the BlackRock executive.”

While the competition was getting started, Mr. Millard began his job hunt.

He started by contacting Mr. Weinberg of Goldman Sachs, sending him his résumé after meeting with him in New York last June.

Mr. Millard’s e-mail messages show that, while the bidding was under way last fall, he also spoke with Rick Lazio, a former House Republican who is now a senior executive at JPMorgan Chase, to discuss career options.

In both cases, spokesmen for the executives said that while Mr. Millard was at the agency, they did not take actions to help him find a new job.

The e-mail messages show that within two weeks of the selection of the winners, Mr. Millard sought help from Karen Seitz, a Goldman executive involved throughout the process, in getting interviews with prominent industry players.

“I spoke with Dennis Kass after our meeting,” Ms. Seitz wrote last November, referring to the chief executive of a $60 billion asset management firm, one of half a dozen interviews she arranged. “He would love to meet with you in N.Y.”

To date, Mr. Millard remains unemployed. His lawyer noted that Mr. Millard had honored the one-year prohibition in federal law against negotiating a job with a firm that he helped select as a contractor. While still at the agency, his lawyer said, Mr. Millard also paid his own bill whenever he dined out with industry officials, including Ms. Seitz.

But Mr. Schooner, the government contracting expert from George Washington University, said even asking for career help from a company he had just picked as a contractor raised serious questions.

“As a federal official you are not supposed to be discussing, bartering or leveraging a new job while you are involved with parties in a procurement,” he said. “It is a clear black-and-white rule.”

Senator Herb Kohl, Democrat of Wisconsin, plans to seek legislation to require more intense oversight of the agency by an expanded board.

“The whole process was flawed,” said Mr. Kohl, the chairman of the Senate Special Committee on Aging, which oversees the agency.


More intense oversight of the PBGC? It couldn’t come soon enough. We also need stiffer penalties for firms and pension fund managers that routinely cross the ethical boundaries. Remember that old Greek saying, he who has honey on his fingers can’t help but lick them.