Some investors see the Baltic Dry Index, a proxy for the shipping rates for dry bulk cargoes, as an indicator of international trade activity. BDI is admittedly noisy, and so needs to be interpreted along with other information. 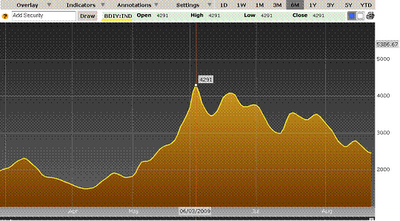 Chinese imports have been a driving factor in commodities demand, which drives the BDI. The price of imported iron ire has dropped below $100 a ton and may fall further. From Cajing.com (hat tip reader Michael):

The slump had sparked panic among iron ore traders, who might now rush to clear their stocks, which could drive prices even lower….

“The price drop was caused by an increase in steel and iron ore stocks at mills and sea ports and a decline in steel prices,” Xu Guangjian, analyst with the Umetal Research Institute….

The slump had sparked panic among iron ore traders, who might now rush to clear their stocks, which could drive prices even lower, he said.

“The steel price has fallen to its early July level, but iron ore is still US$20 a ton higher than it was in early July,” he said, adding that iron ore will likely fall to about US$80 a ton.

The total stock of iron ore in 19 major Chinese ports was almost 73 million tons as of August 22, up 48 million tons on a week earlier, according to Umetal.