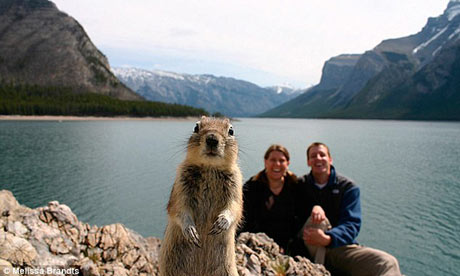 Once the squirrel masters Photoshop – tricky with those little paws – he’ll get the two annoying blurry humans out of the background of his beautiful holiday snap.

He persuaded them to set up their camera by Lake Minnewanka in Banff National Park, and as he heard the motor of the timer whirring, adopted the position – beautifully centred, alert yet relaxed, perfectly in focus, unlike his amateurish assistants.

He then ensured his postcard was circulated to relatives all over the world – you may well sense them lurking just within eyeline of this computer screen, or dashing for the trees with a sheet of newspaper tucked under one arm – by causing Melissa Brandts, who owned the camera, to forward the image to National Geographic, where photo editor Susan Welchman chose it for her Daily Dozen gallery. It has now been picked up by myriad media and websites.

Brandts, who appears hilariously to think the whole thing was her idea, explained: “We had our camera set up on some rocks and were getting ready to take the picture when this curious little ground squirrel appeared, became intrigued with the sound of the focusing camera and popped right into our shot.”