We’ve all been taught that banks first build up deposits, and then extend credit and loan out their excess reserves.

But critics of the current banking system claim that this is not true, and that the order is actually reversed.

But as PhD economist Steve Keen pointed out last week, 2 Nobel-prize winning economists have shown that the assumption that reserves are created from excess deposits is not true:

The model of money creation that Obama’s economic advisers have sold him was shown to be empirically false over three decades ago.

The first economist to establish this was the American Post Keynesian economist Basil Moore, but similar results were found by two of the staunchest neoclassical economists, Nobel Prize winners Kydland and Prescott in a 1990 paper Real Facts and a Monetary Myth.

Kydland and Prescott observed at the end of their paper that:

Introducing money and credit into growth theory in a way that accounts for the cyclical behavior of monetary as well as real aggregates is an important open problem in economics.

In other words, if the conventional view that excess reserves (stemming either from customer deposits or government infusions of money) lead to increased lending were correct, then Kydland and Prescott would have found that credit is extended by the banks (i.e. loaned out to customers) after the banks received infusions of money from the government. Instead, they found that the extension of credit preceded the receipt of government monies.

As Mish has previously noted:

Conventional wisdom regarding the money multiplier is wrong. Australian economist Steve Keen notes that in a debt based society, expansion of credit comes first and reserves come later.

And as Edward Harrison writes:

Central to [Keen’s] ideas is the concept that demand for credit creates loans which create reserves, which is the opposite causality of what one sees in neoclassical economics.

This angle of the banking system has actually been discussed for many years by leading experts:

“[Banks] do not really pay out loans from the money they receive as deposits. If they did this, no additional money would be created. What they do when they make loans is to accept promissory notes in exchange for credits to the borrowers’ transaction accounts.”
– 1960s Chicago Federal Reserve Bank booklet entitled “Modern Money Mechanics”

“The process by which banks create money is so simple that the mind is repelled.”
– Economist John Kenneth Galbraith

[W]hen a bank makes a loan, it simply adds to the borrower’s deposit account in the bank by the amount of the loan. The money is not taken from anyone else’s deposit; it was not previously paid in to the bank by anyone. It’s new money, created by the bank for the use of the borrower.
– Robert B. Anderson, Secretary of the Treasury under Eisenhower, in an interview reported in the August 31, 1959 issue of U.S. News and World Report

“Do private banks issue money today? Yes. Although banks no longer have the right to issue bank notes, they can create money in the form of bank deposits when they lend money to businesses, or buy securities. . . . The important thing to remember is that when banks lend money they don’t necessarily take it from anyone else to lend. Thus they ‘create’ it.”
-Congressman Wright Patman, Money Facts (House Committee on Banking and Currency, 1964)

“The modern banking system manufactures money out of nothing. The process is perhaps the most astounding piece of sleight of hand that was ever invented.
– Sir Josiah Stamp, president of the Bank of England and the second richest man in Britain in the 1920s.

Banks create money. That is what they are for. . . . The manufacturing process to make money consists of making an entry in a book. That is all. . . . Each and every time a Bank makes a loan . . . new Bank credit is created — brand new money.
– Graham Towers, Governor of the Bank of Canada from 1935 to 1955

Indeed, some critics of the current banking system – like Ellen Brown – claim that the entire credit-creation system is an accounting sleight-of-hand, and that banks simply enter into loan agreements, and then obtain the reserves later from the Fed or in the open market. In other words, they claim that banks extend money first, and then increase their reserves on their books later to cover the loans.

So What Does It Mean?

So what does it mean that loans and debt are created first, and then reserves and credit come later?

There are several results.

First, it makes it less likely than most people think that the giant banks will increase the amount of money they’re loaning out to individuals and small businesses. Specifically, since loans are made before new infusions of government cash (Kydland and Prescott), there is not a simple cause-and-effect relationship. So the bailouts to the banks will not necessarily encourage them to make more loans. Indeed, the heads of the big banks have themselves said that they won’t really increase such loans until the economy fundamentally stabilizes (no matter how much money the government gives them).

A funny thing happened to the inflation theory: Banks aren’t lending and proof can be found in excess reserves at member banks. 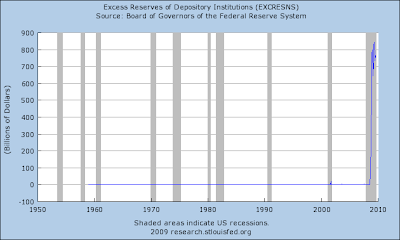 In practice, banks lend money and reserves come later. When defaults pile up, the Fed prints reserves to cover bank losses. Thus, those “excess reserves” aren’t going anywhere. They are needed to cover losses. It’s best to think of those reserves as a mirage. They don’t really exist.

Second, if banks won’t increase their lending in response to government funds, then that argues against inflation and for continuing stagnation in the economy.

Is This Method of Credit-Creation Unsustainable?

Going beyond what most economists believe or will publicly discuss (and going beyond what I have any background or inside information to confirm) – monetary reformers like Ellen Brown argue that the entire banking system is based upon a fraud. Specifically, she and other monetary reformers argue that the banks have intentionally spread the false reserves-and-credit first, loans-and-debt later story to confuse people into thinking that the banks are better capitalized than they really are and that the Federal Reserve is keeping better oversight than it really is.

Moreover, many monetary reformers argue that the truth of loans-before-reserves is hidden in order to obscure the alleged fact that the entire financial system is built on nothing but air. Specifically, Brown argues that unless more and more debt is continually created, since money creation follows debt creation, what we think of as the money supply will shrink, and the economy will crash. In other words, they say that we a massive, ever-expanding debt bubble has been blown for many decades, and that the myth that banks make loans out of their excess reserves helps to fuel the bubble.

Some evidence for that argument comes from a September 30, 1941 hearing in the House Committee on Banking and Currency, where the then-Chairman of the Federal Reserve (Mariner S. Eccles) said:

Monetary reformers argue that the government should take the power of money creation back from the private banks and the Federal Reserve system.

Do the monetary reformers go too far? If so, what should the reality of the way credit is created mean for us and the stability of the economy?