Here is an update of the US Dollar (DX) Very Long Term chart last shown on 3 April 2009 when the Eurodollar short squeeze was still abating.

We do not see any reason to change the longer term targets based on what appears to be a confirmation of the continuing decline. 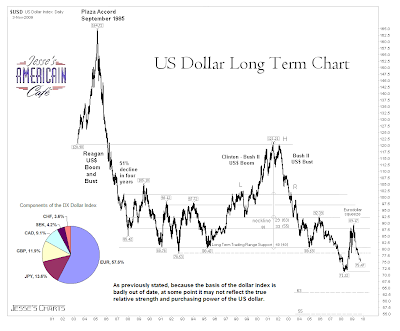 The reasons for this decline are obvious, but so many miss this that we have to wonder what people are thinking. Despite the credit writedowns, and even a potential unwinding of the dollar carry trade which may be a bit overblown even as the demand for dollars in commercial lending is slack, most analysts are missing the bigger picture of a huge overhang of eurodollars that are becoming increasingly less useful to foreign holders, especially if the power of the petrodollar further declines.

There is a potential double bottom to be made at 71, with a possible target in the higher 80’s based on the charts.

The fundamental scenario we would see supporting a reversal rally is a significant equity market dislocation and/or an exogenous geopolitical event that caused another artificial short term demand for dollars and the T bills. Currency dollars are, after all, sovereign debt of zero duration and in any panic there is a rush to the short end of the curve, to the point of accepting negative rates of return for the safety of capital as was seen in the last financial panic leg down.

But after that event, the decline of the dollar will gain again in momentum lower unless there is a profound financial systemic reform and a restructuring of the federal budget deficits.

A genuine reform may be unlikely, since even a reform Administration in the US seems to be attracted to maintaining several costly mega-banks, to act as the potential instruments of national financial policy on the world stage. But even clever frauds can work only so many times, and there is nothing particularly clever or sophisticated about Wall Street’s latest antics, excepting of course their size and their audacity which the average mind cannot well grasp.

The US should not be surprised if the rest of the world does not view new proposals of financial innovations with AAA ratings as favorably as in the past. And as the 700 military bases around the world have proven, large inefficient constructs of empire are expensive to maintain, especially those in the financial world not so easily controlled and certainly more well paid than the usual deployment of ‘weapons of mass destruction.’ 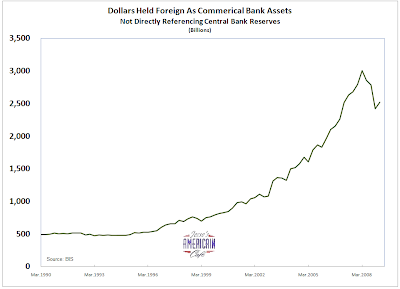 With regard to the shift of some dollar heavy central banks into a greater portfolio diversity, including some gold and even silver in the case of developing economies with less dollar reserves, this should come as no surprise to anyone who has been following the news, except those who dismiss anything the developing world might attempt to do in managing their own financial affairs. As stated at the bottom of the news piece here, the entire gold reserves of the IMF are not enough to slake the desire for a harder reserve asset like gold should China continue on its current diversification. 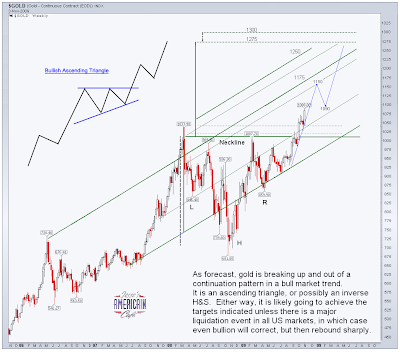 Interestingly enough, none of this has yet shown up in the NY Fed Custodial accounts, where the foreign central banks purchase US guaranteed debt obligations for their portfolios. But it should be remembered that this is a somewhat opaque set of holdings, and does not encompass all of the central bank dollar holdings at all, they being perfectly capable of purchasing dollar assets through commercial sources and open markets without the help of the NY Fed. 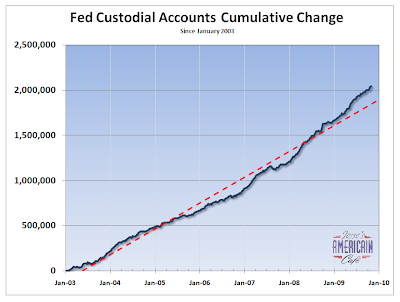 The TIC report helps a bit, but it also is not comprehensive and difficult to square with other sources because of some central bank secrecy and reporting lags and errors. Eurodollars have been even more difficult to track than usual, therefore, and as they are the one major component of M3 that is lacking, it makes it difficult to be estimated by those who generate faux M3 reports based on correlations and trends.

Here is an alternative index of the US dollar from the Federal Reserve that is much broader than the DX in its constituent components. It is a weighted average of the foreign exchange value of the U.S. dollar against the currencies of a broad group of major U.S. trading partners.

It shows the same Eurodollar squeeze and subsequent decline. As a point of order, the term eurodollar is a bit misleading from its historical roots. It basically refers to any US dollars being held overseas, and not just in Europe. 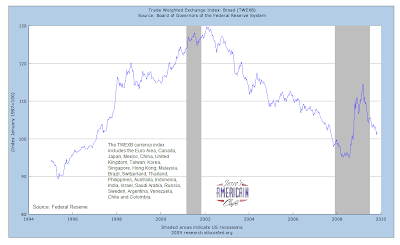