By Steve Keen, Associate Professor of Economics & Finance at the University of Western Sydney and author of Debunking Economics: The Naked Emperor of the Social Sciences

The US Senate should not reappoint Ben Bernanke. As Obama’s reaction to the loss of Ted Kennedy’s old seat showed, real change in policy only occurs after political scalps have been taken. An economic scalp of this scale might finally shake America from the unsustainable path that reckless and feckless Federal Reserve behavior set it on over 20 years ago.

Some may think this would be an unfair outcome for Bernanke. It is not. There are solid economic reasons why Bernanke should pay the ultimate political price.
Haste is necessary, since Senator Reid’s proposal to hold a cloture vote could result in a decision as early as this Wednesday, and with only 51 votes being needed for his reappointment rather than 60 as at present. This document will therefore consider only the most fundamental reason not to reappoint him, and leave additional reasons for a later update.

Bernanke is popularly portrayed as an expert on the Great Depression—the person whose intimate knowledge of what went wrong in the 1930s saved us from a similar fate in 2009.

In fact, his ignorance of the factors that really caused the Great Depression is a major reason why the Global Financial Crisis occurred in the first place.

The best contemporary explanation of the Great Depression was given by the US economist Irving Fisher in his 1933 paper “The Debt-Deflation Theory of Great Depressions”. Fisher had previously been a cheerleader for the Stock Market bubble of the 1930s, and he is unfortunately famous for the prediction, mere days before the 1929 Crash:

Stock prices have reached what looks like a permanently high plateau. I do not feel that there will soon, if ever, be a fifty or sixty point break below present levels, such as Mr. Babson has predicted. I expect to see the stock market a good deal higher than it is today within a few months. (Irving Fisher, New York Times, October 15 1929)

When events proved this prediction to be spectacularly wrong, Fisher to his credit tried to find an explanation. The analysis he developed completely inverted the economic model on which he had previously relied.

His pre-Great Depression model treated finance as just like any other market, with supply and demand setting an equilibrium price. However, in building his models, he made two assumptions to handle the fact that, unlike the market for say, apples, transactions in finance markets involved receiving something now (a loan) in return for payments made in the future. Fisher assumed

(A) The market must be cleared—and cleared with respect to every interval of time.

I don’t need to point out how absurd those assumptions are, and how wrong they proved to be when the Great Depression hit—Fisher himself was one of the many whose fortunes were wiped out by margin calls they were unable to meet. After this experience, he realized that his previous assumption of equilibrium blinded him to the forces that led to the Great Depression. The real action in an economy occurs in disequilibrium:

We may tentatively assume that, ordinarily and within wide limits, all, or almost all, economic variables tend, in a general way, toward a stable equilibrium… But the exact equilibrium thus sought is seldom reached and never long maintained. New disturbances are, humanly speaking, sure to occur, so that, in actual fact, any variable is almost always above or below the ideal equilibrium…

It is as absurd to assume that, for any long period of time, the variables in the economic organization, or any part of them, will “stay put,” in perfect equilibrium, as to assume that the Atlantic Ocean can ever be without a wave. (Fisher 1933, p. 339)

A disequilibrium-based analysis was therefore needed, and that is what Fisher provided. He had to identify the key variables whose disequilibrium levels led to a Depression, and here he argued that the two key factors were “over-indebtedness to start with and deflation following soon after”. He ruled out other factors—such as mere overconfidence—in a very poignant passage, given what ultimately happened to his own highly leveraged personal financial position:

I fancy that over-confidence seldom does any great harm except when, as, and if, it beguiles its victims into debt. (p. 341)

Fisher then argued that a starting position of over-indebtedness and low inflation in the 1920s led to a chain reaction that caused the Great Depression:

(1) Debt liquidation leads to distress selling and to

(3) A fall in the level of prices, in other words, a swelling of the dollar. Assuming, as above stated, that this fall of prices is not interfered with by reflation or otherwise, there must be

(4) A still greater fall in the net worths of business, precipitating bankruptcies and

(5) A like fall in profits, which in a “capitalistic,” that is, a private-profit society, leads the concerns which are running at a loss to make

(6) A reduction in output, in trade and in employment of labor. These losses, bankruptcies, and unemployment, lead to

(7) Pessimism and loss of confidence, which in turn lead to

(8) Hoarding and slowing down still more the velocity of circulation. The above eight changes cause

Fisher confidently and sensibly concluded that “Evidently debt and deflation go far toward explaining a great mass of phenomena in a very simple logical way”.

So what did Ben Bernanke, the alleged modern expert on the Great Depression, make of Fisher’s argument? In a nutshell, he barely even considered it.

Bernanke is a leading member of the “neoclassical” school of economic thought that dominates the academic economics profession, and that school continued Fisher’s pre-Great Depression tradition of analysing the economy as if it is always in equilibrium.

With his neoclassical orientation, Bernanke completely ignored Fisher’s insistence that an equilibrium-oriented analysis was completely useless for analysing the economy. His summary of Fisher’s theory (in his Essays on the Great Depression) is a barely recognisable parody of Fisher’s clear arguments above:

Fisher envisioned a dynamic process in which falling asset and commodity prices created pressure on nominal debtors, forcing them into distress sales of assets, which in turn led to further price declines and financial difficulties. His diagnosis led him to urge President Roosevelt to subordinate exchange-rate considerations to the need for reflation, advice that (ultimately) FDR followed. (Bernanke 2000, Essays on the Great Depression, p. 24)

This “summary” begins with falling prices, not with excessive debt, and though he uses the word “dynamic”, any idea of a disequilibrium process is lost. His very next paragraph explains why. The neoclassical school ignored Fisher’s disequilibrium foundations, and instead considered debt-deflation in an equilibrium framework in which Fisher’s analysis made no sense:

Fisher’ s idea was less influential in academic circles, though, because of the counterargument that debt-deflation represented no more than a redistribution from one group (debtors) to another (creditors). Absent implausibly large differences in marginal spending propensities among the groups, it was suggested, pure redistributions should have no significant macroeconomic effects. (p. 24)

If the world were in equilibrium, with debtors carrying the equilibrium level of debt, all markets clearing, and all debts being repaid, this neoclassical conclusion would be true. But in the real world, when debtors have taken on excessive debt, where the market doesn’t clear as it falls, and where numerous debtors default, a debt-deflation isn’t merely “a redistribution from one group (debtors) to another (creditors)”, but a huge shock to aggregate demand.

Crucially, even though Bernanke notes at the beginning of his book that “the premise of this essay is that declines in aggregate demand were the dominant factor in the onset of the Depression” (p. ix), his equilibrium perspective made it impossible for him to see the obvious cause of the decline: the change from rising debt boosting aggregate demand to falling debt reducing it.

In the 1920s, private debt reached unprecedented levels, and this rising debt was a large part of the apparent prosperity of the Roaring Twenties: debt was the fuel that made the Stock Market soar. But when the Stock Market Crash hit, debt reduction took the place of debt expansion, and reduction in debt was the source of the fall in aggregate demand that caused the Great Depression. 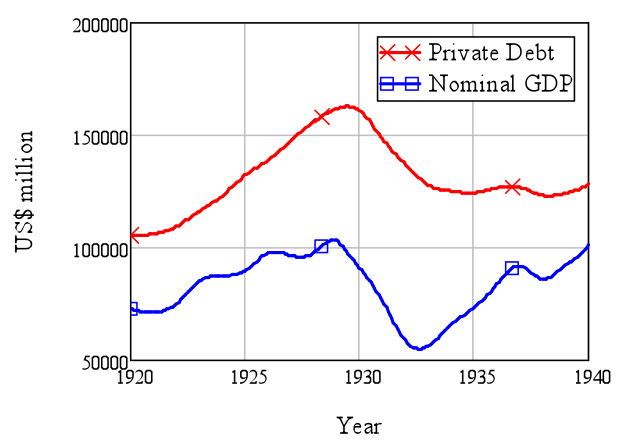 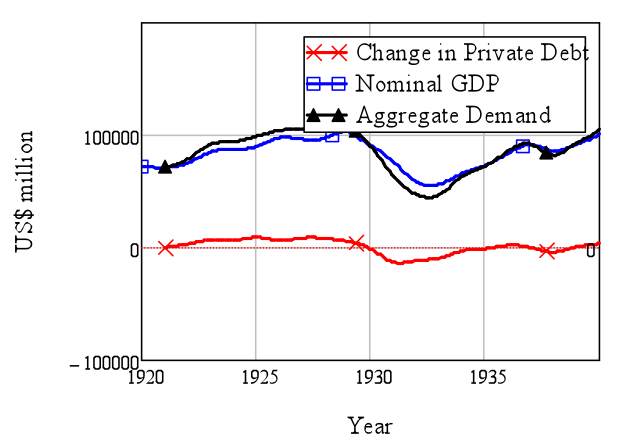 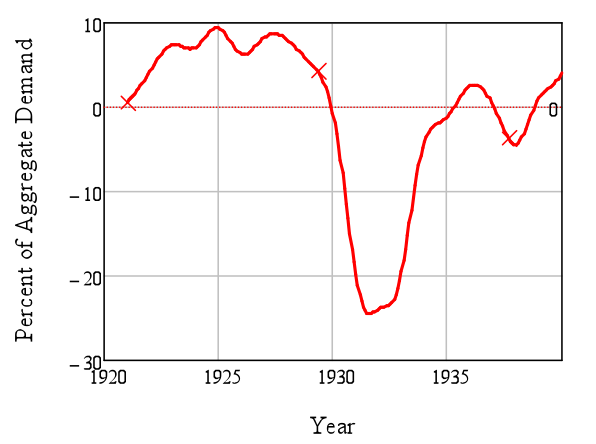 That is not a chart that you will find anywhere in Bernanke’s Essays on the Great Depression. The real cause of the Great Depression lay outside his view, because with his neoclassical eyes, he couldn’t even see the role that debt plays in the real world.

If this were just about the interpretation of history, then it would be no big deal. But because they ignored the obvious role of debt in causing the Great Depression, neoclassical economists have stood by while debt has risen to far higher levels than even during the Roaring Twenties.

Worse still, Bernanke and his predecessor Alan Greenspan operated as virtual cheerleaders for rising debt levels, justifying every new debt instrument that the finance sector invented, and every new target for lending that it identified, as improving the functioning of markets and democratizing access to credit.

The next three charts show what that dereliction of regulatory duty has led to. Firstly, the level of debt has once again risen to levels far above that of GDP (Figure 4). 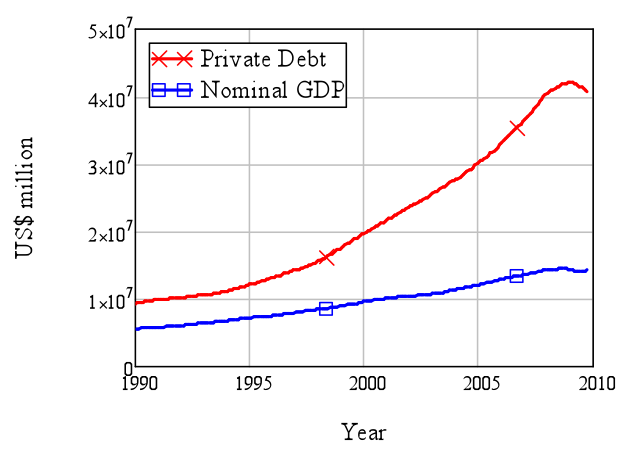 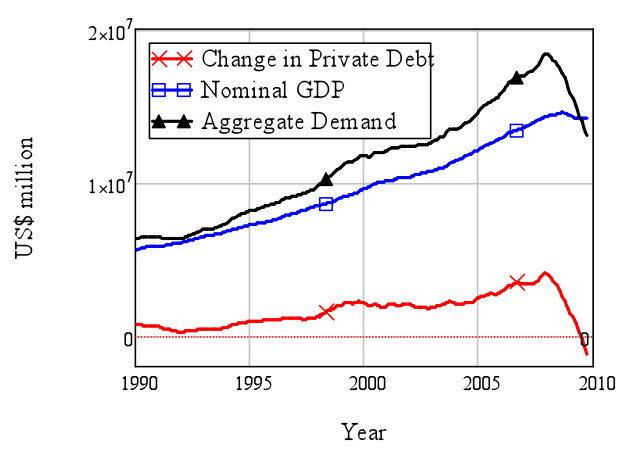 Thirdly, now that the debt party is over, the attempt by the private sector to reduce its gearing has taken a huge slice out of aggregate demand. The reduction in aggregate demand to date hasn’t reached the levels we experienced in the Great Depression—a mere 10% reduction, versus the over 20 percent reduction during the dark days of 1931-33. But since debt today is so much larger (relative to GDP) than it was at the start of the Great Depression, the dangers are either that the fall in demand could be steeper, or that the decline could be much more drawn out than in the 1930s. 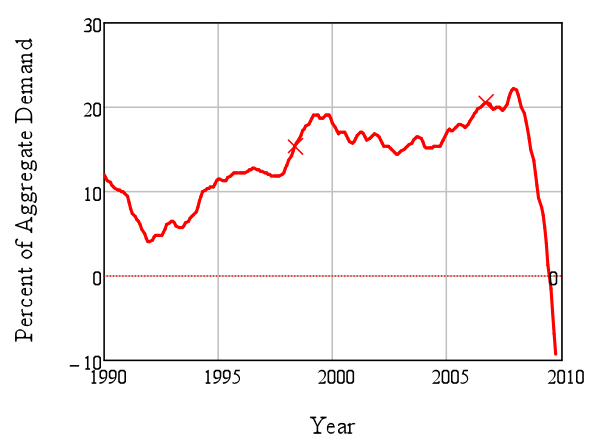 Bernanke, as the neoclassical economist most responsible for burying Fisher’s accurate explanation of why the Great Depression occurred, is therefore an eminently suitable target for the political sacrifice that America today desperately needs. His extreme actions once the crisis hit have helped reduce the immediate impact of the crisis, but without the ignorance he helped spread about the real cause of the Great Depression, there would not have been a crisis in the first place. As I will also document in an update in early February, some of his advice has made America’s recovery less effective than it could have been.

Obama came to office promising change you can believe in. If the Senate votes against Bernanke’s reappointment, that change might finally start to arrive.