Andrew Dittmer, who was an important collaborator on ECONNED, sent me pdfs of the notorious Citigroup Plutonomy reports for leisure reading. Michael Moore highlighted these two research reports (2005 and 2006) in Capitalism: A Love Story .

On the one hand, the authors, Ajay Kapur, Niall Macleod, and Narendra Singh get some credit for addressing a topic surprisingly ignored by mainstream economists. There have been some noteworthy efforts to measure the increase in concentration of income and wealth in the US< most notably by Thomas Piketty and Edmund Saez. But while there have been some efforts to dispute their findings (that the rich, particularly the top 1%, have gotten relatively MUCH richer in the last 20 years), for the most part discussions of what to make of it (as least in the US) have rapidly descended into theological debates. One camp laments the fall in economic mobility (a predictable side effect), the corrosive impact of perceived unfairness, and the public health costs (even the richest in high income disparity countries suffer from shortened life spans). The other camp tends to focus on the Darwinian aspects, that rising income disparity is the result of a vibrant, open economy, and the higher growth rates that allegedly result will lift help all workers. Yet as far as I can tell, there has been virtually no discussion of the macroeconomy effects of rising income and wealth disparities, or to look into what the implications for investment strategies might be. Now the fact that the Citi team asked a worthwhile question does not mean they came up with a sound answer. In fact, he reports are almost ludicrously funny in the way they attempt to depict what they call plutonomy as not merely a tradeable trend (as in leading to some useful investment ideas), but as a Brave New Economy development. I haven't recalled such Panglossian prose since the most delirious days of the dot-com bubble:

We will posit that: 1) the world is dividing into two blocs – the plutonomies, where economic growth is powered by and largely consumed by the wealthy few, and the rest. Plutonomies have occurred before in sixteenth century Spain, in seventeenth century Holland, the Gilded Age and the Roaring Twenties in the U.S.

What are the common drivers of Plutonomy? Disruptive technology-driven productivity gains, creative financial innovation, capitalist-friendly cooperative governments, an international dimension of immigrants and overseas conquests invigorating wealth creation, the rule of law, and patenting inventions. Often these wealth waves involve great complexity, exploited best by the rich and educated of the time…..Most “Global Imbalances” (high current account deficits and low savings rates, high consumer debt levels in the Anglo-Saxon world, etc) that continue to (unprofitably) preoccupy the world’s intelligentsia look a lot less threatening when examined through the prism of plutonomy. The risk premium on equities that might derive from the dyspeptic “global imbalance” school is unwarranted – the earth is not going to be shaken off its axis, and sucked into the cosmos by these “imbalances”. The earth is being held up by the muscular arms of its entrepreneur-plutocrats, like it, or not..

Yves here. Translation: plutonomy is such a great thing that the entire stock market would be valued higher if everyone understood it. And the hoops the reports go through to defend it are impressive. The plutomony countries (the notorious Anglo-Saxon model, the US, UK, Canada and Australia) even have unusually risk-seeking populations (and that is a Good Thing):

…a new, rather out-of-the box hypothesis suggests that dopamine differentials can explain differences in risk-taking between societies. John Mauldin, the author of “Bulls-Eye Investing” in an email last month cited this work. The thesis: Dopamine, a pleasure-inducing brain chemical, is linked with curiosity, adventure, entrepreneurship, and helps drive results in uncertain environments. Populations generally have about 2% of their members with high enough dopamine levels with the curiosity to emigrate. Ergo, immigrant nations like the U.S. and Canada, and increasingly the UK, have high dopamine-intensity populations.

Yves here. What happened to “Give me your tired, your poor/Your huddled masses yearning to breathe free/The wretched refuse of your teeming shore”? Were the Puritans a high dopamine population? Doubtful. How about the Irish emigration to the US, which peaked during its great famine?

Despite a good deal of romanticization standing in for analysis, the report does have one intriguing, and well documented finding: that the plutonomies have low savings rates. Consider an fictional pep rally chant:

Think about that. If you are rich, you can afford to spend all your income. You don’t need to save, because your existing wealth provides you with a more than sufficient cushion.

The ramifications when you have a high wealth concentration are profound. From the October 2005 report:

In a plutonomy, the rich drop their savings rate, consume a larger fraction of their bloated, very large share of the economy. This behavior overshadows the decisions of everybody else. The behavior of the exceptionally rich drives the national numbers – the “appallingly low” overall savings rates, the “over-extended consumer”, and the “unsustainable” current accounts that
accompany this phenomenon….

Feeling wealthier, the rich decide to consume a part of their capital gains right away. In other words, they save less from their income, the wellknown
wealth effect. The key point though is that this new lower savings rate is applied
to their newer massive income. Remember they got a much bigger chunk of the
economy, that’s how it became a plutonomy. The consequent decline in absolute savings for them (and the country) is huge when this happens. They just account for too large a part of the national economy; even a small fall in their savings rate overwhelms the decisions of all the rest. 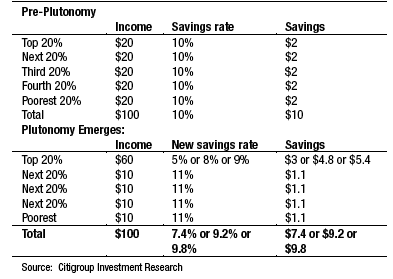 Yves here. This account rather cheerily dismisses the notion that there might be overextended consumers on the other end of the food chain. Unprecedented credit card delinquencies and mortgage defaults suggest otherwise. But behaviors on both ends of the income spectrum no doubt played into the low-savings dynamic: wealthy who spend heavily, and struggling average consumers who increasingly came to rely on borrowings to improve or merely maintain their lifestyle. And let us not forget: were encouraged to monetize their home equity, so they actually aped the behavior of their betters, treating appreciated assets as savings. Before you chide people who did that as profligate (naive might be a better characterization), recall that no one less than Ben Bernanke was untroubled by rising consumer debt levels because they also showed rising asset levels. Bernanke ignored the fact that debt needs to be serviced out of incomes, and households for the most part were not borrowing to acquire income-producing assets. So unless the rising tide of consumer debt was matched by rising incomes, this process was bound to come to an ugly end. 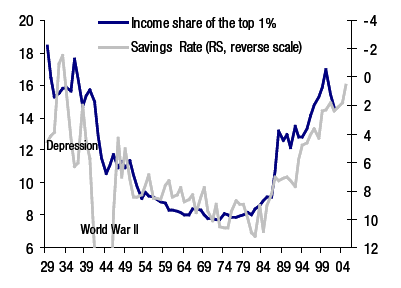 The US shows a negative relationship between income concentration and savings (data points 1929-2002, with 1940-1944 excluded, which is defensible, given widespread wartime rationing): 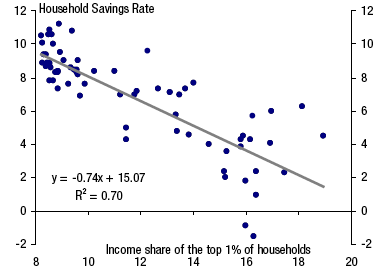 Canada shows the same downward sloping relationship, as does the UK (although the authors have to massage the data a bit more, with one downward sloping line for the period before 1990, with a shift for the 1990s period).

And not surprisingly, plutonomies, with their low saving rates, run current account deficits: 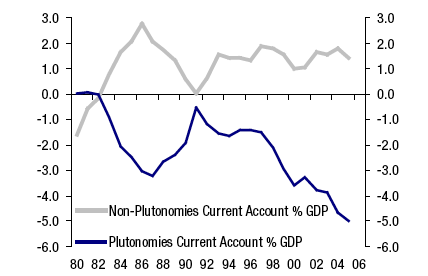 Note this chart excludes the newly industrialized nations of Asia, particularly China, which would presumably make the surplus line in the chart above even more dramatic.

Now correlation is not necessarily causation. However, for those of you who are keen to lower level of borrowing in the US and other debtor countries, it would appear that reducing income inequality needs to be part of the program.