This 2009 analysis by UBS, presented in FT Alphaville, debunks a central tenet of the deficit terrorist camp: 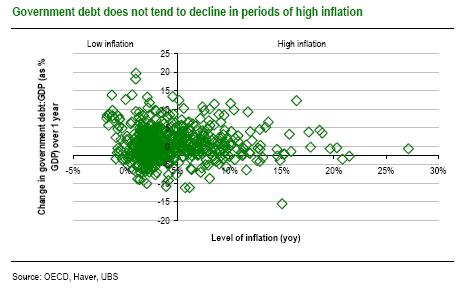 If the deficit terrorists were correct, there should be a much more defined population of the northeast quadrant of the graph attached and discussed in the link. Increases in public debt/GDP ratios should, under the logic of deficit terrorists like Pete Peterson, be associated with observations of escalating inflation. There should be a well defined cloud of historical observations moving up and to the right from the origin of this graph. No such thing to be observed.

Of course, one must be careful with this UBS analysis, since neither do they find a cloud of observations moving definitively in the southwest corner, as many of us might expect from fiscal retrenchment sucking cash flow out of, and reducing the net worth and net financial assets held by the private sector. Public debt to GDP ratios can obviously fall because the denominator is growing more quickly than the numerator, so again, this is a crude display at best, but I know from experience these do tend to become touchstones of market lore.

It also commits the heresy of assuming bond investors can en masse “require” an inflation premium without reducing the value of their existing holdings, a paradox Keynes used to critique Fisher’s interest rate theory which Jan Kregel has highlighted in some of his work, but still remains largely ignored by many.