As I wrote Monday:

In really bad times, people who are evicted from their houses will not rent. Instead, they will move in with friends or family for some time.

Driving the change [i.e. large numbers of rental vacancies and lower rents] is the troubled employment market, which is closely tied to rentals. With unemployment at 9.8% — a 26-year high — more would-be renters are doubling up or moving in with family and friends during periods of job loss. Landlords have been particularly battered because unemployment has been higher among workers under 35 years old, who are more likely to rent. Nationally, effective rents have fallen by 2.7% over the past year, to around $972.

As the first graph below shows (from Calculated Risk) …: 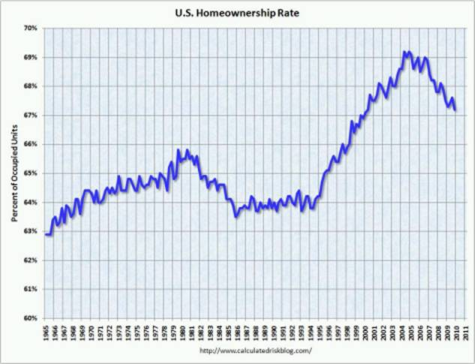 So where have all these people gone who are no longer homeowners? It does not appear that they are moving into apartments or rental housing. As the second graph shows (also from Calculated Risk), the rental vacancy rate is now at 10.7%. While that is down from the record level of 11.1% in the third quarter, it is up from 10.1% a year ago, and the 7-8% range that was normal for most of the 1990s … 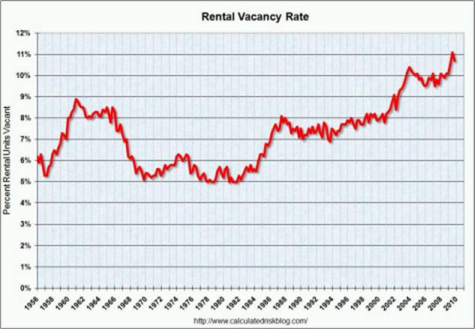 It thus appears that many of the people who used to own their homes, and no longer do, are doubling up with friends and family. This is probably not their first choice of living arrangements, but they are doing so because they have no other choice economically.

In other words, the correlation between falling home prices and rising defaults, on the one hand, with increasing rental demand and higher rental prices, on the other hand, doesn’t hold in a really tough economy.

More than 1.2 million households [have been] lost to the recession, according to a report issued this week by the Mortgage Bankers Association that looked at data between 2005 and 2008. That number doesn’t include information from 2009, when job losses and foreclosures continued to rise.So it’s likely that the full impact of the 8.4 million jobs lost and nearly three million homes foreclosed on since the recession began has taken an even bigger toll on the number of American households.

“Given the depth of the downturn in 2009, and the ongoing weakness in the job market through the beginning of this year, this study gives no reason to expect that household formation has picked up at all,” said Gary Painter, a professor at the University of Southern California who conducted the study.

The study also shed some light on what happens to the people in those “lost” households. It’s widely assumed that many who lose a home to foreclosure become renters. But since the recession began, there has been a five-fold increase in “overcrowding” of remaining households — defined as more than one person per room, according to the study.

That doubling-up is happening as families who lose their homes move in with friends or family. In other cases, younger people have delayed moving out on their own, instead staying with their parents until the economy improves. Others who fail to find work after graduating from college move back home.

Falling homeownership levels
The decline in households is weighing on both the home buying and rental markets. Since the number of home foreclosures began surging in 2007, the national homeownership rate has been steadily falling. But renters also have been forced to double up or move in with friends or family. That’s a major reason that the vacancy rate for U.S. apartments stood at 8 percent in the first quarter, the highest level since 1986, according to a report this week from Reis, a real estate research firm.

Homeownership levels, meanwhile, continue to decline. New foreclosures filings are running about 300,000 a month, according to RealtyTrac. There are currently some 5 million homeowners that are 90 days or more past due on their mortgages, according to Fannie Mae chief economist Doug Duncan.

In some cases, the loss of a house to foreclosure is leaving families homeless, though there is little national data available on how many are affected. A recent study by the Department of Housing and Urban Development found family homelessness on the rise since the recession began, with the biggest increases in suburban and rural areas.

Other groups, like the National Alliance to End Homelessness, report that a rising number of older adults are without a permanent place to live.

“The limited existing research tells a story of increasing homelessness among adults ages 50 and older,” the group said in a recent report.