Greenspan and many other bankers, regulators and industry insiders say that “no one could have known” that we were in a housing bubble.

Stood by his conviction that little could be done to identify a bubble before it burst, much less to pop it.

And he claimed that:

We didn’t and couldn’t have known about the problem until Fannie and Freddie figures were released in December 2009.

But leading housing price analyst Robert Shiller has charted real (i.e. inflation-adjusted) housing prices back to 1890. Here’s how it looked as of August 2006:

Here’s how it ended up: 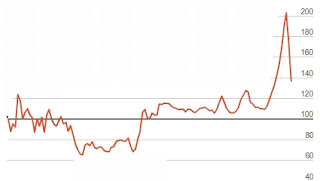 Joe Sixpack didn’t have access to real housing price data.  But by 2004 or 2005, the Fed, Fannie, Freddie, the big banks and everyone else who had an economist on hand should have known that we were in an unprecedented bubble.

In addition, the Bank for International Settlements warned the Fed about the housing bubble many years ago, but the Fed ignored the warnings.

Moreover, Donald L. Kohn, member of the Board of Governors of the Federal Reserve System, gave a speech in February of 2003 asking whether there was a housing bubble. In 2004, Kohn said:

Warnings about a possible “bubble” in house prices have been sounded for a number of years now. About a year ago, I examined this issue in some detail and concluded that, while one could never be very confident about such a judgment, house prices were not obviously too high and the housing stock was not clearly too large. Since then, however, prices have climbed further, and by more than the rise in rents–a proxy for the return on houses. Consequently, the odds have risen that these prices could be out of line with fundamentals.

Goldman’s top economist – Jan Hatzius – was publicly warning of a housing bubble in 2005.

There were many other warnings as well. Paul Farrell provides a chronology:

June 2005: The Economist. Cover story two years before collapse: “The worldwide rise in house prices is the biggest bubble in history. … Rising property prices helped to prop up the world economy after the stock market bubble burst in 2000.” Values increased 75% worldwide in five short years. “Never before have real house prices risen so fast, for so long, in so many countries … This is the biggest bubble in history.” …

February 2006: Faber’s Market Newsletter. “Correction Time is Here!” was Faber’s headline: “If we combine the overbought condition of the stock market, investors’ sentiment high optimism, equity mutual funds’ low cash positions, and also heavy foreign buying, we have all the ingredients for a stock market correction in the US getting underway very shortly.”

March 2006: Forbes. Economist Gary Shilling wrote: “The current housing weakness will develop into a full-scale rout … It’s clearly a bubble and is nationwide … The house-price collapse will induce a painful recession that will send U.S. stocks into a tailspin … China will suffer a hard landing … and weakness in the U.S. and China will spread worldwide.”

May 2006: Harper’s magazine. Michael Hudson wrote an article, “Guide to the Coming Real Estate Collapse,” analyzing 20 trends: “Taken together, these factors will further shrink the ‘real’ economy, drive down those already declining real wages, and push our debt-ridden economy into Japan-style stagflation or worse.”

August 2006: Wall Street Journal. Countrywide’s CEO Angelo Mozilo: “I’ve never seen a ‘soft-landing’ in 53 years, so we have a ways to go before this levels out. I have to prepare the company for the worst that can happen.” …

November 2006: Fortune. Cover story asks: “Can the Economy Survive the Housing Bust?” They said “the correlation between current builder confidence and future stock market returns over the past 10 years is downright unnerving.” The NAHB confidence index is a leading indicator because the stock market inevitably follows in lockstep a year later. The index had “plummeted 54%.” …

June 2007: Shilling’s Insight Newsletter. “Just as the U.S. housing bubble is bursting, speculation elsewhere will come to a violent end if history is any guide. … Richard Bookstaber, who designed various derivative-laden strategies over the years, now fears that financial derivatives and hedge funds, focal points of today’s huge leverage, will trigger a financial meltdown.”

And in 2008, the Wall Street Journal pointed out:

You might have noticed that there’s been a lot of gnashing of teeth lately along the lines of, “Why oh why didn’t we recognize the housing bubble?”

Let’s go to the record.

This isn’t to say that reporters somehow “got” the bubble when nobody else did. Reporters’ main job is to report, and if they’re writing more stories about a housing bubble, it’s probably because more people are saying that there is one. Indeed, 81% of respondents in an online WSJ.com poll in May 2005 said they thought the U.S. housing market was in a bubble. Most of the people who responded “yes” thought the bubble would keep growing.

Given the above, can there be any doubt that the bankers, regulators and industry insiders knew there was a bubble?

Note: Everyone knows that Greenspan was largely responsible for blowing the bubble by holding rates too low for too long. But most people forget that he was also one of the main cheerleaders for adjustable rate mortgages and subprime loans (and see this). The Fed under Greenspan also refused to enforce laws protecting borrowers from abusive lending practices, despite repeated urging by consumer advocates across the country and even by other government agencies, even though the Fed was the only agency with the power to do so.