Both fiscal and monetary policymakers have said that they will begin to unwind the stimulative policy stances when the economy shows signs of embarking on a self-sustaining return to full employment and trend growth. However, the yield curve remains steep as the markets fear higher real interest rates emanating from growing fiscal deficits and higher inflation stemming from the low level of interest rates and the growth of the Fed balance sheet. A quick review of recent US economic history suggests that that policy exits will be revolving doors.

Since the mid-1990s, the US economy has been almost continuously reliant on fiscal and monetary stimulus to maintain satisfactory rates of growth and full employment.

Simple measures of the fiscal deficit or surplus are not appropriate measures of the stimulus or drag provided by fiscal policy. Drops in revenues and increases in outlays occur automatically during a cyclical downturn and then reverse themselves during a cyclical upturn. Despite some limitations, cyclically adjusted budget measures separate out cyclical factors and are useful to determine, in a rough way whether the budget is providing a positive or negative influence on the growth of real income in the short run. 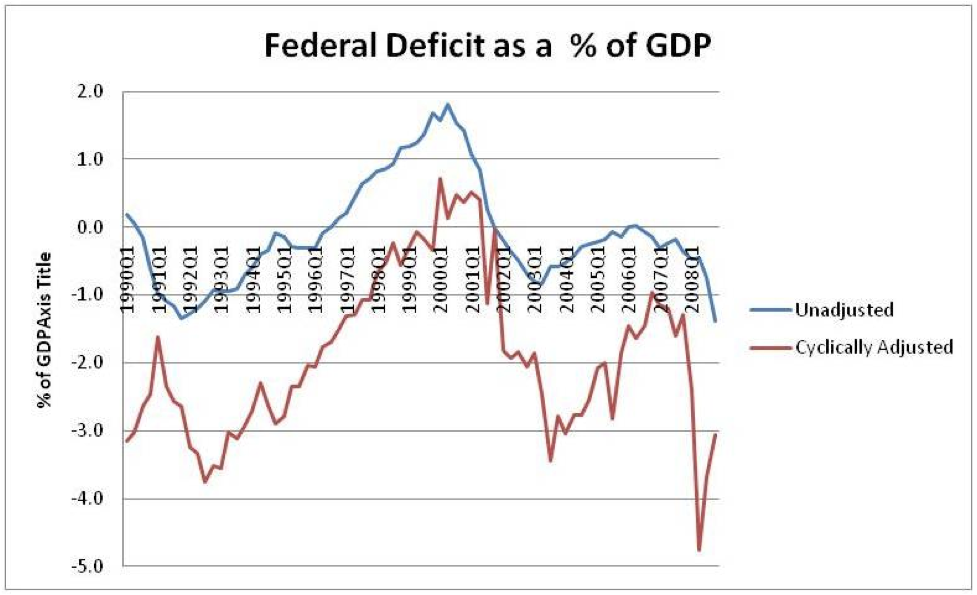 Many economists have argued that the Fed was “too loose for too long”, or overly stimulative post-2001. The Fed argues otherwise, pointing its adherence to the Taylor rule. However, there have been very public disagreements between advocates of different specifications of the Taylor rule. These disagreements have largely focused on the most appropriate measure of inflation. For example, John Taylor has argued the Fed policy was too easy from 2002-2005 based on a Taylor rule that employed current CPI instead of the forecasts of future PCE deflators.

More importantly, conventional Taylor rule analysis does not distinguish between domestic and imported inflation or between deviations of output from potential caused by a) declines in domestic animal spirits and b) increases in the world’s willingness to export to the US at unchanged or lower prices.

Consequently, given globalization and the inability of the Dollar to adjust to maintain external balance, the Taylor rule-based policy has been continuously stimulative since at least the mid-1990s.
The Taylor rule can be jury-rigged so as to reflect the US monetary policy stance that would have reflected only domestic factor-driven deviations from target levels of inflation and output.
Assume:

2. Kohn’s estimate that imported deflation pulled measured US inflation (PCE deflator) down between 50 and 100 basis points per year for the period 1996-2006,

3. the excess of final purchases by US-based economic agents over potential US output, which grew from about 2% of GDP in 1996 to about 6% in 2006 (which implies “demand” averaged 2% (of GDP) higher than conventionally measured).

The amended Taylor rule suggests that the Fed funds target should have averaged more than 200bps higher (other things equal –although a difference of that size in the Fed fund target would have implied that virtually everything else would have changed.)

US monetary policy has been decidedly and consistently stimulative. Alternative statement of the conclusion: stimulative US monetary policy offset both the disinflationary effects of imported deflation on “measured” US inflation and the drag on net aggregate demand emanating from the net trade sector. It did so not by promoting adjustments to globalization, but by contributing the growth of unsustainable asset price bubbles which in turn supported bubbles in consumption and residential and commercial real estate investment. The anti-cyclical aggregate demand based policies pursued since the mid-1990s have not address the underlying structural problems.

The US economy is growing. Given the policy-based stimulus it would a shock if it wasn’t. The real question is: will it keep growing if the promised policy exits are realized.

Going forward, it is unlikely that exports will increase fast enough to compensate for any near-term exiting of the current very stimulative policy stances. The labor market, the trade deficit, the return of positive private savings, the excess supply of both housing and commercial real estate, the political pressures, and the crippled financial system and recent history suggest that any policy exit will short-lived.