Richard Alford has correctly identified the need to address global imbalances – rather than simply slouch our way back to some milder version of status quo before the pre- Lehman meltdown arrangement, as we presently appear to be doing – if we are to have any hope of finding a sustainable global growth path. On this much we can surely agree. As to the method of addressing global imbalances, however, and perhaps even the true nature of these imbalances, we find ourselves deeply at odds with some of his diagnosis and most of his prescriptions.

Richard specifically takes issue with those of us who have been warning about the pursuit of large, prolonged fiscal retrenchment paths in the eurozone. He believes this is a bit of a diversionary tactic on our part, akin to a stance John Connolly once took, of restating our problem as their problem to deal with, not ours. The solution to the US problem is plain and simple in Richard’s mind: stop fighting austerity policies abroad, and start advocating their implementation at home.

Now it is true, as a matter of double entry book keeping, that if the US as a nation is going to reduce the gap between its spending and its income (which would reduce the currently widening trade deficit by definition), then nations that are major trading partners of the US must be prepared to reduce their net saving. Just as it takes two to tango, there are two sides to every exchange or transaction. One nation cannot increase its financial balance or net saving with the rest of the world unless the rest of the world is prepared to reduce its net saving. So from a rational perspective, rebalancing global growth does, as a matter of fact, require both sides to move in the right direction. This is not a theory – it is simply an accounting reality. One side can initiate the move, but both must be prepared to move.

Frequently, we are told by neoliberals, who dominate the economics profession and policy making circles, that there is something called the “twin deficits” that must be recognized and addressed in the US. The twin deficit story goes like this: an increase in the fiscal deficit will tend to lead to an increase in the current account (or trade) deficit. Therefore, if reducing the US current account deficit is a desirable if not a necessary policy objective, then it is surely necessary to reduce the fiscal deficit. We have been hearing this story for nearly three decades from the neolibs.

Specifically, look at the entire decade of the ‘90s, when the twins moved in opposite directions. The fiscal balance increased, while the trade balance fell. This is supposedly impossible under the neoliberal twin deficits story. Then observe the shaded bars, which encompass recessions of the past 45 years. Lo and behold, in nearly each of the recessions of the past nearly half century, the fiscal balance has fallen while the trade balance has risen. The facts indicate the twin deficit story is at best an incomplete or unreliable story (click to enlarge). 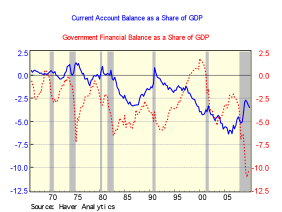 Why might this be the case? The neoliberals are not playing with a full deck – or at least they are keeping some cards up their sleeves. In prior articles, policy briefs, and public presentations, we have traced out the fact that while for the economy as a whole, total saving out of income flows must equal total investment in tangible assets (houses, plant and equipment, etc.), this is not true for any one sector of the economy. Breaking the economy down into three sectors – government, foreign, and domestic private sectors – we can derive the following identity which must hold true at the end of any accounting period (we can provide the simple algebra to derive this upon request – it appears in other publications of ours, as well as in much of the research Wynne Godley performed while at the Levy Institute):

This means in order for the current account (CUB) and the fiscal balance (GFB) to be twins, as the neoliberals often assert, such that a fall in the fiscal balance (say an increase in the fiscal deficit) leads to a commensurate fall in the current account balance (say an increase in the trade deficit), then there must be little or not change in the domestic private sector financial balance (DPSFB). This, it turns out, is empirically false. The DPSFB is rarely stable, especially in the past two decades of serial asset bubbles, when both the household and nonfinancial business sectors have gone deeper than ever into deficit spending territory under the influence of asset prices kiting ever higher.

So what is the true twin of the trade deficit? We can split the DPSFB, as we hinted just above, into the household and nonfinancial business sectors.

When we do so, we notice a new set of twins arises from the historical data. The true twin of the CUB is the HB, or household financial balance. And of course, this makes perfectly good sense since most of the trade deficit is in the area of tradable consumption goods (click to enlarge). 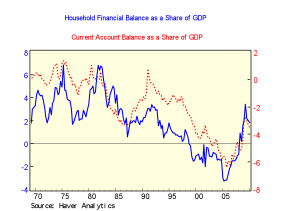 So if we decide the US CUB needs to turn around, we best find a way to increase the HFB, or the net saving positions (saving minus investment) of the household sector. How can this be achieved? Expanding and rearranging the accounting identity above, we find:

If we want to get the two true twin financial balances increasing in value (thereby reducing the current account or trade deficit) then we have two choices available. Either reduce the government financial balance (increase fiscal deficits) or reduce the NBFB (get businesses to run down their free cash flow positions by reinvesting more of their profits in tangible capital equipment). If we rule out the former on neoliberal concerns about fiscal sustainability, we are left with but one choice to improve the position of the true twins, and that is a higher reinvestment rate in the domestic business sector.

And this, dear reader, brings us to the heart of the matter. Remember the global savings glut you keep hearing about from Greenspan, Bernanke, Rajan, and other prominent neoliberals? Turns out it is a corporate savings glut. There is a glut of profits, and these profits are not being reinvested in tangible plant and equipment. Companies, ostensibly under the guise of maximizing shareholder value, would much rather pay their inside looters in management handsome bonuses, or pay out special dividends to their shareholders, or play casino games with all sorts of financial engineering thrown into obfuscate the nature of their financial speculation, than fulfill the traditional roles of capitalist, which is to use profits as both a signal to invest in expanding the productive capital stock, as well as a source of financing the widening and upgrading of productive plant and equipment.

What we have here, in other words, is a failure of capitalists to act as capitalists. Into the breach, fiscal policy must step unless we wish to court the types of debt deflation dynamics we were flirting with between September 2008 and March 2009. So rather than marching to Austeria, we need to kill two birds with one stone, and set fiscal policy more explicitly to the task of incentivizing the reinvestment of profits in tangible capital equipment. A program to do so would include the following measures:

1) a prohibitive tax on retained earnings that are not reinvested with a 24 month period after they have been booked;

2) a financial asset turnover tax that raises the cost to businesses of playing casino games in various financial asset markets, rather than reinvesting profits in the productive capital stock;

3) a reinvigorated public or public/private investment program that helps speed up the shift to, and lower the costs of production of new energy technologies.

Regarding the last proposal, we must be willing to recognize the history of US economic development includes a number of very large and very bold public and public/private investment initiatives that provided numerous business opportunities and the basis for breakthrough technologies to emerge. The canal, railroad, highway, and other initiatives were hardly the doorway to the communist gulag they are made out to be. Indeed, if anything, Asia has mastered the use of this approach to push one of the most rapid adoptions of capitalism ever.

We know we need to reconfigure our energy infrastructure – we knew it over thirty years ago. It is time to act, and the third proposal could include such measures as solarizing all government buildings in the southern states in order to drive unit costs of solar cell production down, which in turn would increase the competitiveness of US producers of solar cells in global markets. There are undoubtedly more proposals we could bring to bear on the business sector to break the global corporate saving glut and force capitalists to act as, well, capitalists, but for the moment, this is a good enough place to start.

Notice how his statement fingers the wrong twins – the fiscal and current account deficits are asserted to be mutually determined. Neoliberals tell this fib all the time. Empirically, we have shown you this is false, at least for much of the last four decades of US history, Theoretically, we have shown you this is also a suspect assertion: if you bother examine the macrofinancial balance equation in its full form, you find the neolib fib requires an implicit assumption that the DPSB show little or no change over time, which again is empirically false.

Notice the emphasis on depressed savings rates needing to be reversed and revived, when, as we argued above, the real source of US and global imbalances is a corporate savings glut. Firms are earning generous profits, but they are not reinvesting them in tangible productive assets. This visibly short circuits long run growth prospects, and is the foundation of the structural problem Richard alludes to, but we doubt he would recognize it as such.

That neoliberals with credentials, credibility, tenure, and positions of policy influence can continuously assert these glaring misconceptions is either malpractice, malfeasance, or both. It is not our place to speculate on their motives, though we have our own hunches (here is a heavy hint: just follow the money). Call it innocent fraud if you must, but neoliberals would have us marching to Austeria on the basis of their hollow, unsubstantiated slogans. It is high time for the neolibs to finally drop their fibs and step out of the way. Sorry Lady Thatcher, but there is an alternative to Austeria.

*Earlier in the month we coined the terms Austeria and Austerian Economics. We introduced these concepts in our June 10th BNN TV interview, and in our June 11 Richebacher Letter Weekly Alert to describe the policy stance we saw the G-20 embracing for Austeria, formerly know as the eurozone. (And yes, bloggers elsewhere who have been erroneously attributing these terms to Mark Thoma’s subsequent June 17th use of it at Economist’s View – please consider doing a little fact checking now and again).