Brad DeLong points out that Ronald Reagan was far more concerned about unemployment than Team Obama (or Washington generally) is, and also took far more aggressive measures to combat it. From The Week (hat tip reader Marshall):

By the start of 1983, labor unions were frantically giving back previously-promised wage increases and offering wage cuts to employers who were delighted to reopen labor contracts. The unemployment rate hit 10.5 percent. The Mexican government was bankrupt. And the Federal Reserve began shifting course, acknowledging that its policies had overshot their mark.

Washington, D.C. was in a panic. With high unemployment perceived as a genuine national emergency, the Federal Reserve embarked on a policy of massive monetary ease. The Reagan administration promised that the deficits created by its 1981 tax cuts and increased defense spending were the recipe for putting America back to work. Everybody had a plan to reduce unemployment. And every lobbyist or speculator with a scheme unrelated to jobs recast his pet project as a magic unemployment-reducing bullet.

Today, the unemployment rate is kissing 10 percent. Global financial markets are sending us a message that the excess demand for high-quality financial assets is growing again.

Yet, unlike 1983, there is no sense of urgency in Washington.

The policy response when the market wants more safe assets is simple: Give it what it wants. In early 1983 the Federal Reserve frantically expanded the money supply to give the market the cash it wanted. The U.S. Treasury frantically printed huge, honking tranches of Treasury bonds for the private sector to hold. The hope and expectation was that satisfying the demand for high-quality financial assets would relieve the excess supply of goods and services and workers. That expectation was duly realized. The unemployment rate, which had been 10.8 percent in December 1982, fell to 8.3 percent by December 1983. Come Election Day, November 6, 1984, unemployment was down to 7.2 percent. It was morning in America.

It’s also worth noting that the increase in unemployment in the wake of the financial crisis is greater than occurred in the early Reagan era: 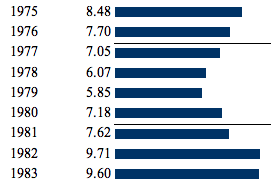 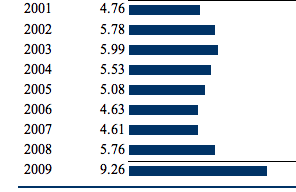 Given that the explosive debt growth in the US from 1999 onward was in household debt, improving unemployment would also help repair financial firm balance sheets (highly levered households + a fall in income = default).

Clinton, and Reagan before him, understood that a President’s most important responsibility in peacetime is creating jobs. Complacency on this issue by the Democrats looks suicidal.Thomas Ferguson and Jie Chen performed a detailed analysis of the Massachusetts Senate election that Republican Scott Brown unexpectedly won. Their conclusion:

This paper takes a closer look at the Massachusetts earthquake. It reviews popular interpretations of the election, especially those highlighting the influence of the “Tea Party” movement, and examines the role political money played in the outcome. Its main contribution, though, is an analysis of voting patterns by towns. Using spatial regression techniques, it shows that unemployment and housing price declines contributed to the Republican swing, along with a proportionately heavier drop in voting turnout in poorer towns that usually provide many votes to Democratic candidates. All these factors are likely to remain important in the November congressional elections.

Yves here. The fact that Washington is wildly out of touch with America becomes more apparent with every passing day. Pat Caddell (pollster to Carter, who has since left the Democrats) has told me that he has never seen anything like the gap in responses on various issues between the population and the governing apparatus in the capital.

So what explains this bizarre, self-destructive posture? One simple explanation is that the neoclassical economics orthodoxy has become so hopelessly entrenched despite its manifest failure (witness the crisis) that few can see how deeply captured they are by its ideology. A key tenet is the demonization of organized labor, combined with a refusal to recognize that many forms of commercial activity tend to lead naturally to agglomeration of power. Thus unions serve as a useful counterweight to concentrations of corporate power.

Before I hear reader howls, it is important to recognize that anti-union sentiments have been marketed aggressively since the early 1980s. I grew up with a father who ran major manufacturing operations, dealt with multiple unions throughout his career, and was horribly right wing. I never once heard him say anything bad about unions. Similarly, I graduated from Harvard Business School in 1981. I cannot recall a single person at the school, either faculty or students, criticizing unions. And this was after a near-decade of stagflation, with Japanese and German manufacturers on the rise. Germany, then as now, had strong unions; Japan did not, but was famous for having enlightened policies towards workers. In other words, treating workers decently was not seen as contradictory to economic might.

It is perverse that unions for middle and lower income workers are demonized, but unions for the educated, like the legal, accounting, and medical professions, get nary a second thought. And how about CEOs? While not a formal union, there are mechanisms that help keep pay aloft (most important, comp consultants who are hired by the CEO human resources department who manage to persuade boards to set the standard for their CEOs pay in the top 50% of his peer group or higher. That assures constant leapfrogging of pay). Why is collusion among workers to achieve higher pay levels savaged, but far more egregious featherbedding by top executives and boards given a free pass?

But most of America appears to have deeply internalized the belief that labor lacks, and perhaps more important, ought not to have any bargaining power. This is a wonderful state of affairs for the managerial elite and investors. Having labor share in productivity gains was no impediment to growth; indeed, the record from the end of World War II through the mid-1970s versus the last two decades would suggest the reverse.

And the argument that US labor cannot compete with China et al is overblown. In most cases of outsourcing and offshoring, the results are disappointing (a dirty secret you will find if you burrow into the literature; for instance, IT, a popular candidate, has a particularly poor record). But it also serves to reduce lower-level labor costs and INCREASE managerial costs (greater coordination required). From the Wall Street Journal on IT outsourcing:

Dean Davidson, an analyst who follows outsourcing for Meta Group, in Stamford, Conn., says that companies usually find their actual cost savings from moving offshore are less than they would expect based on straight wage comparisons. “The reality is a general savings of 15%-20% during the first year,” Mr. Davidson says. That’s far less than the 50% to 80% savings based on hourly labor rates, he says.

Yves here. Recall this is software: no shipping or inventory financing costs. The gap between the raw labor costs and the net savings is an increase in compensation to managers (which could be either via larger bonuses or an increase in headcount).

I’ve had corporate staff of manufacturing companies (not in the production part of the business, hence no dog in the fight) maintain, having seen the internal plans, that the case for offshoring and outsourcing were not compelling, and could easily be depicted as not worth the risk given transit times and greater business system rigidity. But their corporations went ahead anyhow because Wall Street looked favorably upon outsourcing. Yes, some jobs and activities probably would have been lost regardless, but far more was ceded than had to be.

A second reason for complacency about unemployment is just as deeply rooted. There is little confidence in conventional policy remedies. Neoclassical economics posits equilibrium, so near collapses of the world as we know it are not supposed to happen. The Austrian and Keynesian schools believe in disequilibria and have prescriptions. However, the risk of the social breakdown with the Austrian prescription is correctly seen as high (one of the reasons Roosevelt had a block of support among major corporations was they recognized the country really could fall apart, and they saw aggressive intervention as less dangerous than violence and an increasingly popular Communist movement).

The Keynesians have become discredited due to the perception in some circles that the government has been too quick trigger with stimulus, which has led to an aversion to using it in a deep downturn, when it is a useful tool (an analysis in chapter 8 of ECONNED indicates that fiscal stimulus was too aggressive in the 1990s).

But the real problem may be that all these approaches are past their sell-by dates, helpful around the margin but insufficient to provide lasting relief to our current malaise. We may be at the end of a paradigm. The US and its trade partners have engaged in a 30 year experiment of deregulation, financial liberalization, more open trade, and deep integration of markets. But most other countries had clear objectives: they wanted to protect their labor markets, which usually entailed running a trade surplus (or at least not a deficit). Many of them also had clear industrial policies. By contrast, the US pretended it was adhering to a “free markets” dogma so that whatever resulted from this experiment was virtuous. But in fact, we have had stagnant real worker wages, with a rising standard of living coming from rising household borrowings and to a much lesser degree, falling technology prices. We have also had industrial policy by default. Certain favored groups, such as Big Pharma and the sugar lobby, get special breaks.

And who has been the biggest beneficiary of our stealth industrial policy? The financial services industry. How many Treasury Secretaries have lobbied for more open financial markets with major trade partners? Has any other industry seen as extensive a reduction in regulations? And we’ve had first the Greenspan, now the Bernanke put, with the financial services well aware that the Fed will run to the rescue of the markets (ie the banksters) should any serious trouble arise, but the resulting low rates work to the detriment of savers, and push all investors to take undue risks to compensate for artificially low yields.

So the inaction over unemployment is yet another symptom of deep seated rot in the body politic. But recognizing the true nature of the problem is the first step to finding remedies.