A fund manager who will go unnamed mentioned to me that he is putting clients into bank stocks because they are trading at or below book value.

Now of course, individual stocks can and do always outperform the outlook for their sector, so there are no doubt particular banks whose stocks are cheap right now. But there are good reasons to question the notion that banks in general, and money center banks in particular, are a bargain.

First and perhaps most fundamental is the notion that bank equity is a readily-measured number, and that book value is therefore a useful metric. In general, even in companies in make-and-sell businesses, balance sheet items are subject to artful reporting. Notice, for instance, how every four or five years most big public companies take a writeoff that they classify as extraordinary, and equity shills dutifully exclude it from their calculation. In most cases, the writeoff is an admission that past earnings were overstated, but seldom is anyone bothered by what this says about the integrity of that company’s accounting or the acumen of its management.

Bank earnings, even under the best circumstances, involve a great deal of artwork, and most of all in the very big banks with large dealer operations. As Steve Waldman pointed out,

Bank capital cannot be measured. Think about that until you really get it. “Large complex financial institutions” report leverage ratios and “tier one” capital and all kinds of aromatic stuff. But those numbers are meaningless. For any large complex financial institution levered at the House-proposed limit of 15×, a reasonable confidence interval surrounding its estimate of bank capital would be greater than 100% of the reported value. In English, we cannot distinguish “well capitalized” from insolvent banks, even in good times, and regardless of their formal statements.

Lehman is a case-in-point. On September 10, 2008, Lehman reported 11% “tier one” capital and very conservative “net leverage“. On September 25 15, 2008, Lehman declared bankruptcy. Despite reported shareholder’s equity of $28.4B just prior to the bankruptcy, the net worth of the holding company in liquidation is estimated to be anywhere from negative $20B to $130B, implying a swing in value of between $50B and $160B. That is shocking. For an industrial firm, one expects liquidation value to be much less than “going concern” value, because fixed capital intended for a particular production process cannot easily be repurposed and has to be taken apart and sold for scrap. But the assets of a financial holding company are business units and financial positions, which can be sold if they are have value. Yes, liquidation hits intangible “franchise” value and reputation, but those assets are mostly excluded from bank balance sheets, and they are certainly excluded from “tier one” capital calculations. The orderly liquidation of a well-capitalized financial holding company ought to yield something close to tangible net worth, which for Lehman would have been about $24B.

So Lehman misreported its net worth, right? Not according to the law. From the Valukas Report, Section III.A.2: Valuation — Executive Summary:

The Examiner did not find sufficient evidence to support a colorable claim for breach of fiduciary duty in connection with any of Lehman’s valuations. In particular, in the third quarter of 2008 there is evidence that certain executives felt pressure to not take all of the write‐downs on real estate positions that they determined were appropriate; there is some evidence that the pressure actually resulted in unreasonable marks. But, as the evidence is in conflict, the Examiner determines that there is insufficient evidence to support a colorable claim that Lehman’s senior management imposed arbitrary limits on write‐downs of real estate positions during that quarter.

In other words, the definitive legal account of the Lehman bankruptcy has concluded that while executives may have shaded things a bit, from the perspective of what is actionable within the law, Lehman’s valuations were legally indistinguishable from accurate. Yet, the estimate of net worth computed from these valuations turned out to be off by 200% or more.

Yves here. Aside from the general issues Steve raises, we have specific reasons to be skeptical of bank asset valuations right now. It isn’t merely that we have very low interest rates, which do a wonderful job of juicing the value of risky and long-dated financial assets. More important, there is ample evidence of regulatory forbearance, more colloquially called “extend and pretend.” We’ve pointed repeatedly to evidence of how the four biggest banks are carrying large portfolios of second mortgages at implausible valuations. Similarly, risky assets are also being carried at marks well in excess of their likely long term value. As one reader noted late in the spring:

….the same money managers that bought new issue subordinate CMBS tranches at $100.00 and sold them at $30.00 are now buying them back after the “wall of money”, bubble momo has pushed their prices back to $90.00. Of course the fundamentals of CRE are still god-awful, the loans are defaulting in droves, and the eventual “value” of many of those bonds is very likely to be $5.00.

Yves here. Another issue is the impact of financial reform. Even though yours truly thinks it is underwhelming, the changes in progress will reduce bank leverage somewhat. Less leverage means lower returns on equity.

Andrew Horowitz of The Disciplined Investor sent some charts via e-mail that provide further support for bank skeptics. The first chart points to a sharp compression in loan spreads. This is similar to, albeit less extreme, than what has taken place in Japan, where banks are so flush with cash that the competition for loans means they cannot earn an adequate spread. 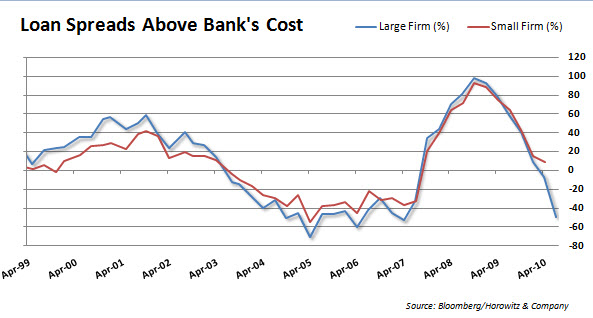 Another symptom of excessive competition for loans in the sectors where banks are willing to lend is deteriorating lending standards for bread and butter commercial and industrial loans: 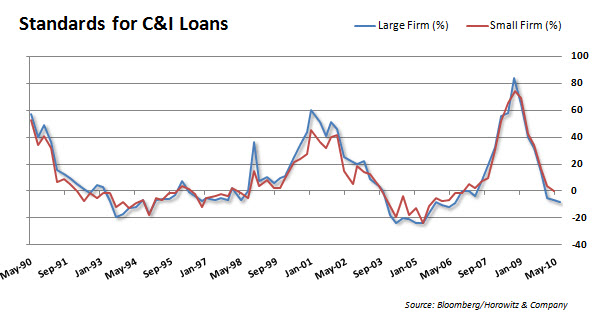 Even though it’s fashionable for bankers to blame their so-so equity performance on the government that bailed them out, the big culprit is that financial sector will contract regardless as households and companies deleverage, plus a crappy economy means not so hot business prospects.