By Steve Keen, Associate Professor of Economics & Finance at the University of Western Sydney, and author of the book Debunking Economics, cross posted from Steve Keen’s Debt Deflation.

The record $6 billion profit that the Commonwealth Bank is expected to announce today is a sign of an economy that has been taken over by Ponzi finance. Fundamentally, banks make money by creating debt, and the amount of debt we’ve been enticed into taking on is the sign of a sick economy rather than a healthy one. The level of private debt that is actually needed to support business and maintain home ownership at historic levels (ownership levels have fallen over recent years!) is possibly as little as one sixth the current level. 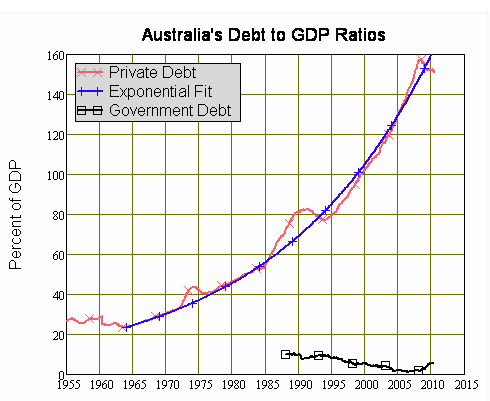 Because of that debt level, bank profits have gone through the roof as a share of GDP. Back before we had a financial crisis—when debt levels were far lower than today—so too were bank profits as a share of GDP. A sustainable level of bank profits appears to be about 1% of GDP. The blowout from this level to virtually six times as much began when bank deregulation began under Hawke and Keating, and then took off as Howard and Costello encouraged everyone to become “Mum and Dad Investors”, which meant borrowing money from the bank and gambling on share and house prices. 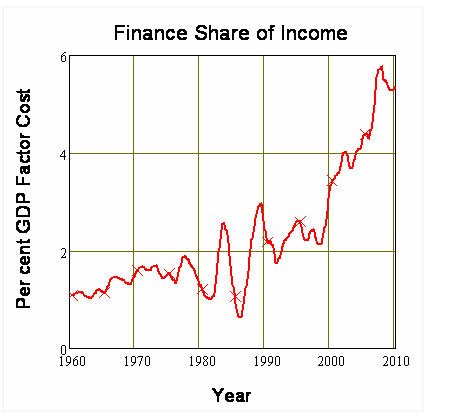 As readers of this blog know, I build models of financial instability, and in my models, one symptom of an economy that is headed for a Depression is a rise in bankers share of income at the expense of workers and capitalists. The model below has yet to be calibrated to the data, but the similarities with the actual data are still ominous.

One empirical reality illustrated by the model as well is that even if firms are the ones taking on the debt (as they are in this model—it does not include household borrowing), workers are the ones that pay for this in terms of a declining share of national income: rising debt is associated with a constant profit share of GDP but a falling workers share.

When the crisis really hits, both workers and capitalists suffer as bank income goes through the roof—leading to a Depression. The only way out of this is to abolish large slabs of the debt, and coincidentally to drive bankers share of income back down to levels that reflect is supportive role as a provider of working capital for firms—rather than a parasitic role as the financier of Ponzi schemes. 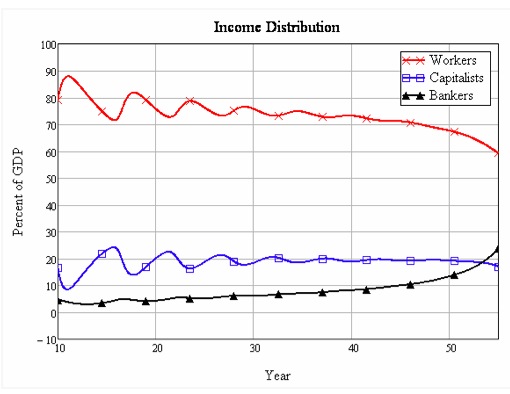